Newsletter
Sign Up today for our FREE Newsletter and get the latest articles and news delivered right to your inbox.
Home » 1979 Chevrolet Monte Carlo – The Kolor Of Money 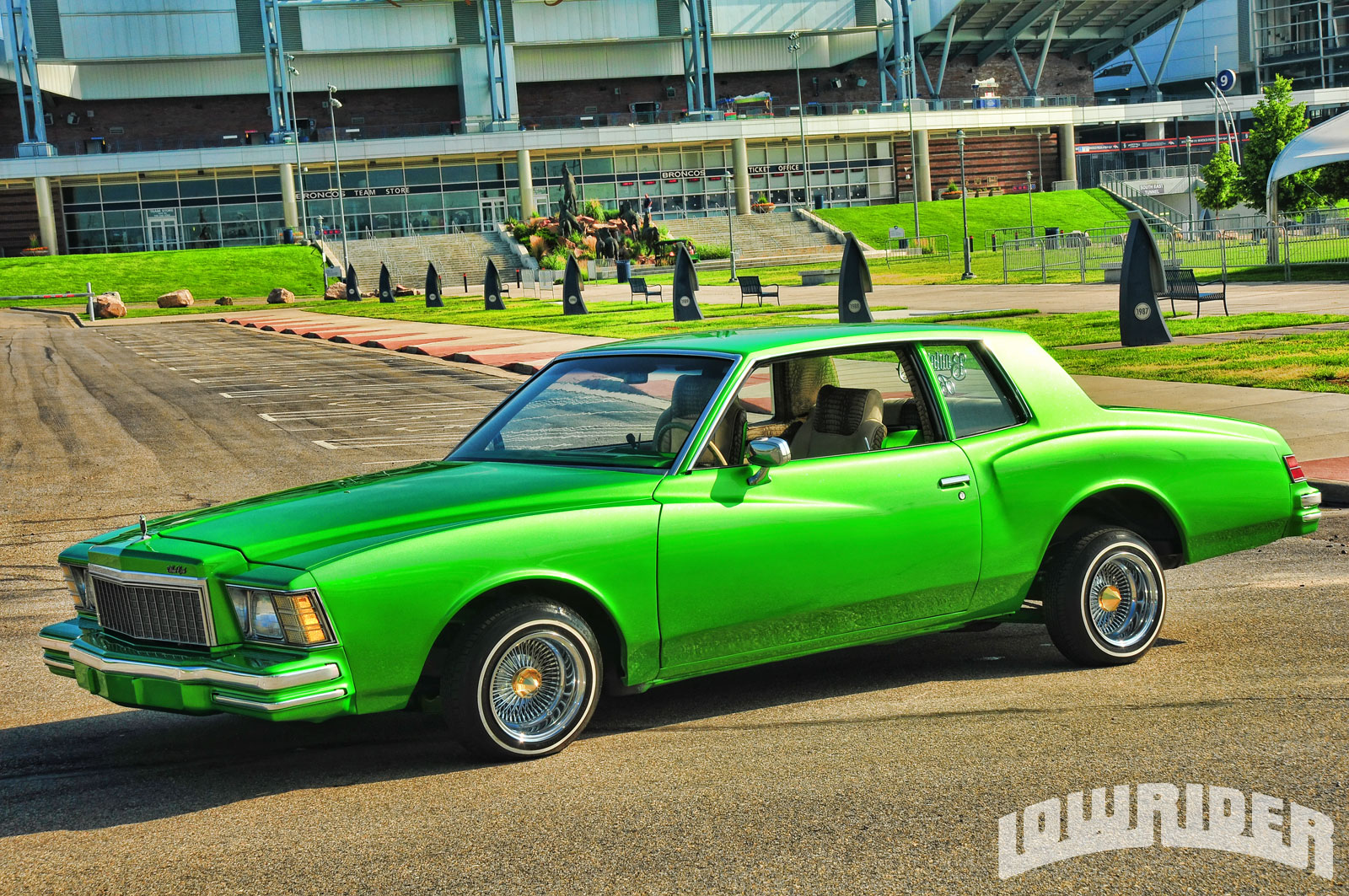 When your profession is a painter, you are constantly looking for the perfect canvas for your own ideas. Jake Garcia, a twenty-nine year-old painter at Ed Bozarth Chevrolet in Aurora, Colorado, has been looking for a ride in which he could add his own flare. He came across a nice Monte Carlo years back but times got tough, and it was sold to help him catch up financially. He spent the next couple of years again looking for a clean Monte Carlo. With no luck, he decided to start from scratch, finding a 1979 Chevrolet Monte Carlo for a mere $700. At that price, you can imagine the car’s condition, and Jake certainly had his work cut out for him.

With the help of friend Jodi Johnson, Jake rebuilt the stock 305-c.i.d. in order to get it road ready. Tom Spirek from Denver, Colorado did the bodywork and prepped the Monte for the next step. The Chevy was brought into the paint booth where Jake showed off his talents, laying down layers of PPG water base Green Ice Pearl paint throughout the Chevy body. Creeper, from Carnales Customs in Denver, Colorado, had the task of adding a full hydraulic suspension. He lived up to the task masterfully, adding a two-pump, three-dump HiLow setup powered by eight marine batteries.

With the Monte Carlo on its way to full custom, Jake enlisted Max at Unstoppable Upholstery in Denver, Colorado, and a radical transformation from stock to wild was completed. A bold, crocodile-bronze two-tone with tan suede was wrapped around the seats and door panels. Fiberglass was built and painted to match, before being inserted into every section to flow with the overall theme of the car. The audio portion of this great build was completed by Joe Archuletta, who added a Jensen flip-out DVD player with a Nextar 4-inch navigation screen built into the console. Pioneer midrange speakers were built into the fiberglass console, and four 10-inch subwoofers were mounted in the fiberglass rear console.

When it came time to debut the Monte Carlo, Jake chose the biggest stage in Colorado; the Denver Lowrider Magazine Show, and the Monte did not disappoint. Earning a second place award at its first show, this Monte is on its way to Lowrider superstardom! For Jake, it was gratifying that his first custom build was a huge success and gathered the attention of a lot of custom builders. “I know I have more work to do,” Jake tells us, “But as a first build, I’m pretty satisfied with what I was able to build with the help of my friends.” A proud member of Boulevard Bullyz, Jake wishes to thank his family, kids, Lowrider Magazine and extend his enormous gratitude to Invesco Field. Nice work, Jake.

“The Kolor of Money”

Engine: The stock 305-c.i.d. was rebuilt, painted and chromed by Jake and Jodi Johnson.

Interior: Max from Unstoppable Upholstery in Denver, Colorado added a radical transformation of crocodile-bronze two-tone tan suede throughout the cabin. A custom painted dashboard and center console was made in fiberglass.

Setup: Creeper from Carnales Customs in Denver, Colorado added a full two-pump, three-dump HiLow hydraulic setup. Lifting the Chevrolet is 8-inch CCE cylinders to the front and 10-inch to the rear. Eight Energizer batteries power the setup and four switches handle all the moves.

Sound System: The bumps were added by friend Joe Archuletta. A Jensen DVD flip-out was used to control the Pioneer components located in the fiberglass interior. Four Pioneer 10-inch subwoofers are powered by two Pioneer amplifiers and are mounted in the rear fiberglass console.