Newsletter
Sign Up today for our FREE Newsletter and get the latest articles and news delivered right to your inbox.
Home » 1981 Cadillac Brougham – West Coast Pop Lock 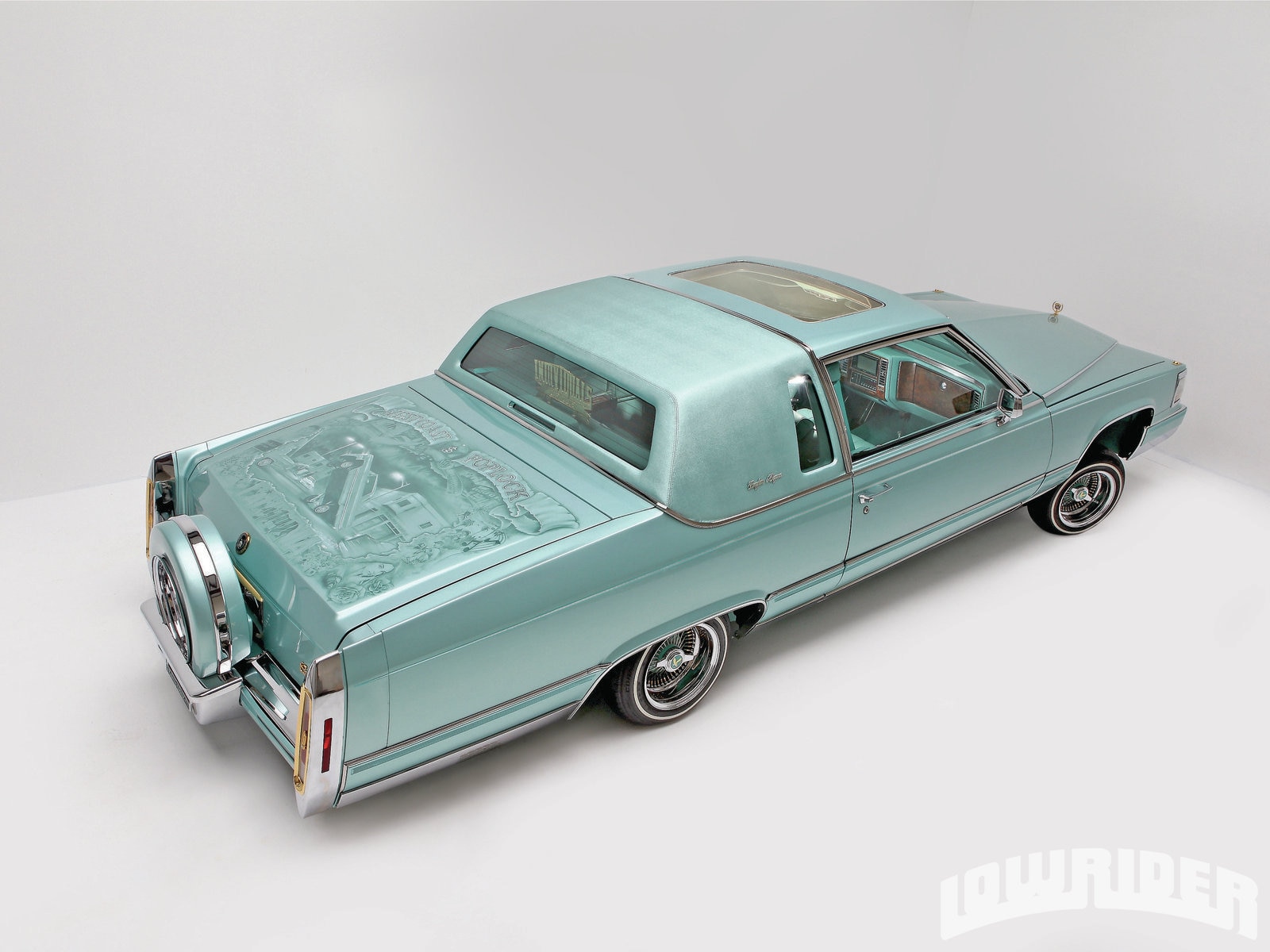 “It’s got to be Hot!” The words from Carlos “Coast One” Malvido of San Jose, CA., resonate throughout the summer afternoon air. “The car has got to be able to do what it was meant to do,” says this avid hopper. In fact it was hopping that initially attracted Coast to the scene, as he vividly remembers seeing the ‘90s style Cadillacs from Individuals Car Club hopping in videos and sparkling in the pages of Lowrider Magazine. While he vowed to one day become a member himself, it seemed out of reach as it was a SoCal based car club. Luckily for Coast, things changed. “Lil Rick is responsible for bringing the club up North,” he says with a smile.

Coast One is known in our scene for doing patterns and murals, but when he was young he used to do graffiti and build model cars. Back then, the city had an after school program where they would send youngsters like Coast and other talented kids to go and work with Alex Arostigui from Signs and Wonders. “Alex used to do patterns and his work was even featured in magazines,” explains Coast. It was in this program that Coast and the others began airbrushing. “They would have each one of us airbrush a big board and then they would put it up for display at a school.” The kids even got paid to participate and when they were done for the day, most would go home, but Coast would often hang around the shop to watch Alex pattern out cars. He got his first taste of the process on a bike that Alex let him work on. “He did the design on one side and I would trace it on to the other side,” explains Coast. “That’s how I kind of got started painting.”

Coast One has been flown across the country to lay patterns. He has even been flown out to Montreal, Canada were he patterned out Dave Gravelle’s big body from Luxurious Car Club.

Coast already had a few four door Cadillacs but he always wanted a two-door that was “90ed out.” In 2006, he was able to pick up a regular two door for $600. “The car wasn’t running and had a broken window,” says Coast. He only had the Cadillac for one day before someone called the city and had it towed away. “The car was bumper to bumper in between two vans, so they dragged it out sideways before they could tow it away” explains Coast. Within 48 hours, his $600 investment became a $900 one after he went in to bail it out.

“I wasn’t trying to build this,” he says of his Caddy. “I was just trying to build a street ride but one thing led to another. I didn’t build it to sell it or even to show it, I built it to ride it!”

Coast would like to thank Joe Alvarez and Raul Hererra at Camden Auto Body for doing most of the bodywork, spraying it, and allowing him to finish the car there. “A whole lot of people helped out in the build, and I am grateful to everyone who helped push it along.”

Engine: Carlos sent out every piece of his 350 to get chromed by Hugo Ventura of Ventura Polish in Los Angeles, CA.

Body/Paint: Once the ‘90s kit, sunroof and third brake light had been installed on the Cadillac, Carlos had Joe Alvarez of Camden Auto Body in Campbell, CA., do the bodywork and paint. Pat Cubellos mixed some PPG paints to come up with a custom sea Foam color scheme before spraying the luxury ride. Angelo came in and added some silver leafing to the car before Coast One added the monotone street theme mural on the trunk.

Interior: The Cadillac’s transformation from an ’81s interior to a true ‘90s interior was conceptualized by Juan Perez who converted everything from the armrest to the over the shoulder rear seat belts. The car was then sent to Avila at Avila Upholstery, who stitched everything together in the original pattern with a custom color to match the body.

Setup: Ben Centeno of the Hop Shop in San Jose, CA., installed the four pumps, with three Adex dumps powered by ten batteries in the trunk.