Newsletter
Sign Up today for our FREE Newsletter and get the latest articles and news delivered right to your inbox.
Home » 1964 Chevrolet Impala SS Convertible – Katrina 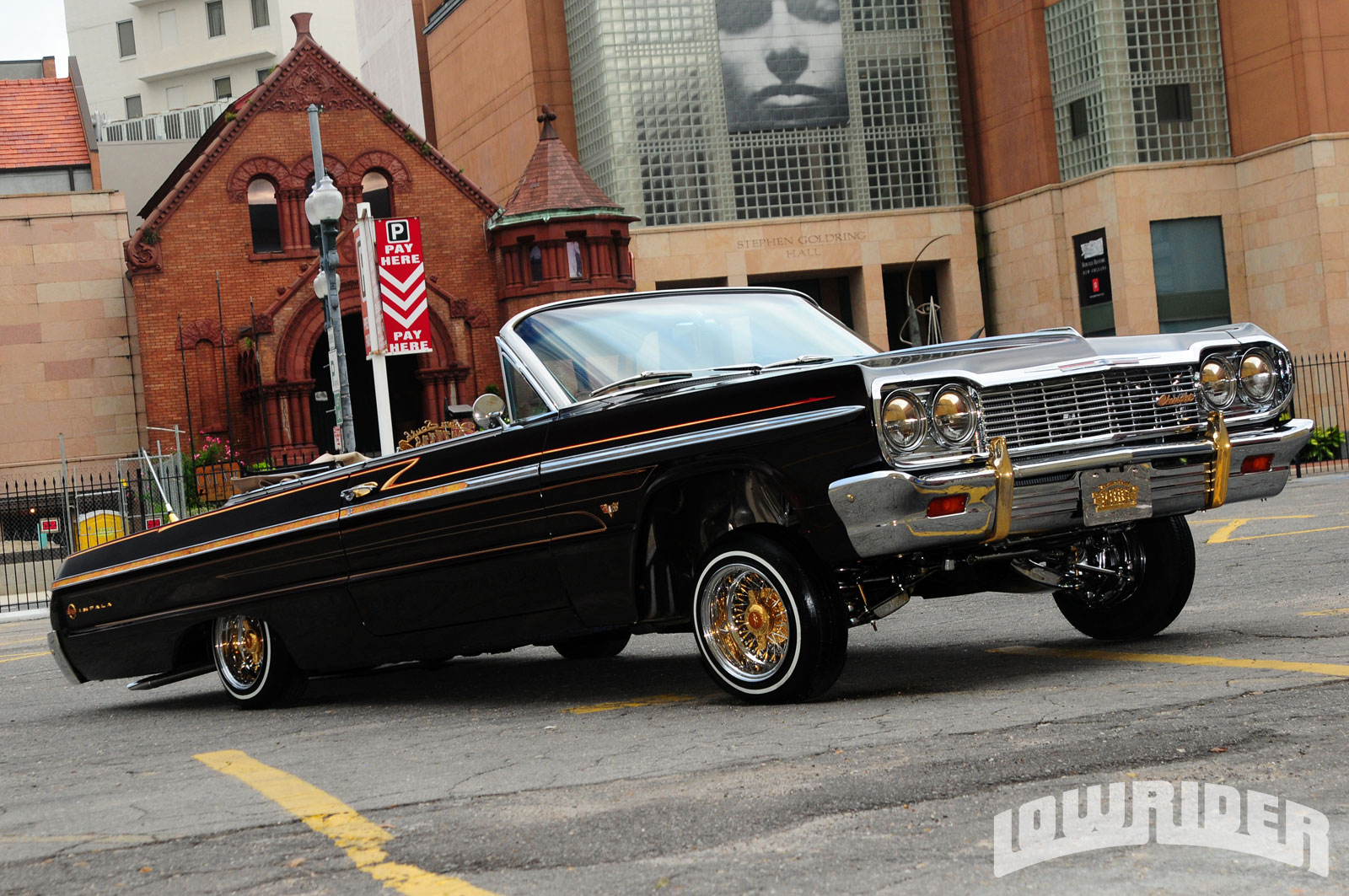 Upon first glance, this story might seem fit to be the perfect movie script; a tale of career success and Lowrider happiness. Sadly, the tragedy and reality involved might be a little too real for the Silver Screen. Southerner “Suddy” Lewis was born and raised in Marrero, Louisiana, just fifteen minutes from New Orleans. As a kid, Suddy was a happy child who looked forward to one day taking over his father’s heavy equipment and construction business. Fate had different plans however, and Suddy’s parents lost their lives when he was just seventeen. Now 33 years old and looking back, Suddy recalls, “It doesn’t get much harder than that.” Thankfully the situation made him stronger; strong enough to use the bulldozer and excavator his father left him to propel himself as business owner of one of the most successful excavating services in Louisiana. Running his own company has been more than just satisfying to him as an individual, it has been rewarding to his Louisiana community as well. Suddy’s company played an integral role in the emergency cleanup work during Hurricane Katrina, as they were responsible for the repair and replacement of many of the levees surrounding the town.

With such responsibility on his hands from an early age, the Lowrider in Suddy never got the chance to build the car of his dreams. Finally, he found a few windows of time and he began to customize a hard-top Impala in his garage. Although the project was coming along nicely, frustration soon set in because he realized that he really wanted a convertible. The project came to a halt and many hours were spent in front of the computer looking for the perfect drop top Impala. When he finally located one in California, he took a little too long to make up his mind and the owner took it off the market. Little did he know that behind his back, his wife, Desiree, and good friend, Tony, had already purchased the car for him.

When the hardworking Suddy saw the Impala pull into his driveway, he couldn’t have been more surprised. Here it was; the beautiful 1964 Convertible SS he had so desperately sought to build! After thanking his wife and Tony, a speechless Suddy wasted no time in contacting Walt Stewart from Street Toys in Jackson, Mississippi. Since Suddy already had the hard-top as a parts car, Walt initially began by swapping parts from it to transfer them to the convertible before making the more serious upgrades. Master painter, Sergio, added a rich coating of House of Kolor Root Beer Brown while pinstripe artist, Angelo Maisano, completed the exterior with elegant gold leaf and creative body lines.

With the exterior shaping up, Suddy moved on to the car’s interior which had to meet his lofty standards as well. He elaborates, “The interior was perfect for a street car, but I wanted a show car!” Looking to take the interior to another level, the Impala headed off to Auto Motif in Harvey, Louisiana where Jim gutted the interior, dropped in a tan Berber carpet with leather trimmings, and then wrapped the seats with true Saddle Brown leather. Even the door panels were treated to a combination of carpet and leather. Since music is always a critical element of any completed custom, the next stop on the Impala’s journey was RD Audio &amp; Security in Marrero, Louisiana, where the team installed a comprehensive stereo package. The Eclipse head unit controls the power from the Memphis amplifiers, sending a signal to the multiple Memphis mids and highs positioned throughout the car. Booming bass is achieved, thanks to the band-pass enclosure under the dash filled with two eight-inch Memphis subwoofers.

The final upgrade was tweaking the suspension and the experts at Del Toro reinforced the frame and created the hydraulic set up using three Del Toro pumps with engraved backing plates. A four-switch panel controls all the moves the Impala can make. Walt, from Street Toyz, added the finishing touches on the car’s frame, relocating the brake lines and adding high strength, upper and lower control arms. A linear actuator lifts the trunk so spectators can marvel at the level of engineering artistry. In every way possible, this Impala convertible is now a full custom that anyone would be proud of.

When Hurricane Katrina hit New Orleans, it gave everyone a reminder about what was really important in their lives. Suddy took the reflection from it as well and while Suddy wasn’t able to share his passions with his parents, he certainly shares them with his wife Desiree and their three girls, Sierra, Summer, and Sienna. You can find them spending every moment they can in the family’s cool new Chevy. Although the Impala is complete, Suddy still owes a big debt of gratitude for all the hard work put in on it by his family and friends. As President of Down South Rollers C.C., he does his best to return the favor by always assisting the members of his club.

The final chapter in this story is the name of the car. What’s the best way to keep the important things in life in perspective? You guessed it; Suddy calls the car Katrina!