Newsletter
Sign Up today for our FREE Newsletter and get the latest articles and news delivered right to your inbox.
Home » 1936 Chevrolet Cabriolet – Jefe 1936 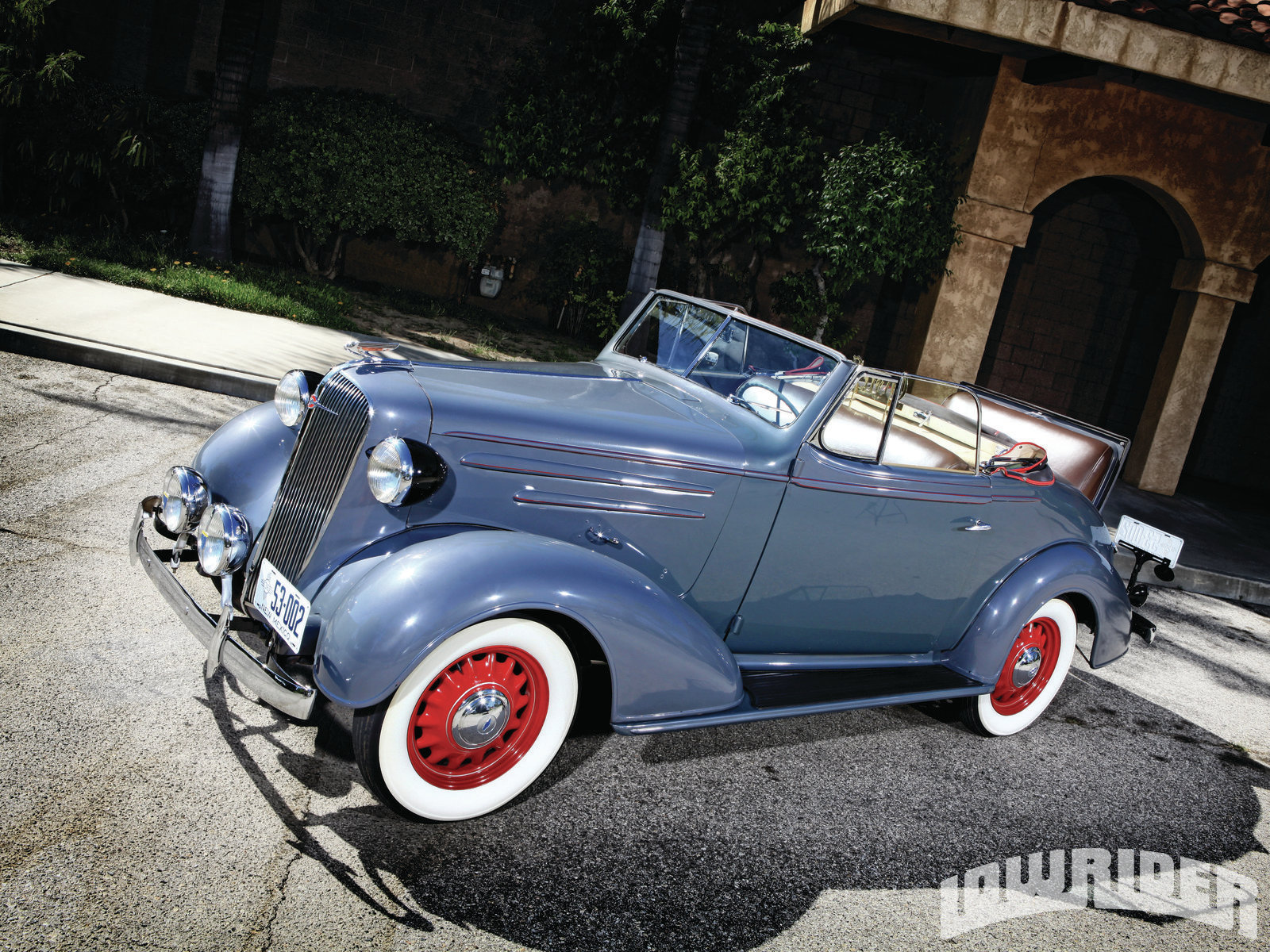 Many Lowriders get their start in the culture thanks to growing up with family members already in the scene, but every once in a while, a lone maverick makes his mark, just like Martin Maldonado of Albuquerque, New Mexico. You see, Martin didn’t have anyone to guide him in the Lowrider scene; he started by building model cars on his own. “I started making my own wire wheels and hydraulics for the models cars,” Martin says. Even though he had no family members to share this hobby with, Martin remained dedicated to his blooming passion, and he kept building model cars. “Lowriding just came naturally to me,” he says with a grin. As he began to forge his own path in the culture, Martin began to take his Lowrider model cars to car shows and put them out on display.

At age fifteen, when most Lowriders-in-training have graduated from model cars to bikes, Martin leaped from model cars to real ones as he purchased himself a 1950 Chevy pickup―a truck he still has today. “I used to buy and sell cars, as well as accessories,” Martin explains. That being the case, Martin’s attention to detail and knowledge base of the industry led him on the hunt for something unique to drive; something that would become an obsession.

“I was in the market for a rare convertible, something different,” says Martin, who wanted to stand out from his fellow drivers. “I’ve been in the game since I was fifteen and I know people from all over the country,” he says. This turned out to be a blessing as one of his friends tipped Martin about a ’36 Chevy Cabriolet that was for sale. “I bought it off a car collector in Minnesota two years ago,” Martin explains. Since he had bought the car from a car collector, the car was in decent condition, but Martin still had plenty of restoration work ahead of him to get the ’36 up to his own standards. Some of the restoration included rebuilding the top end of the motor, adding accessories, detailing the car, and chroming a lot of items, so Martin got right down to work.

After finishing the car, it received plenty of attention, and word of Martin’s ride eventually caught the ear of Oldies Car Club vet Ricardo Alvarado. “I told him what I had and I talked to him about starting a chapter here in New Mexico,” Martin says. Ricardo asked for pictures of his cars and upon seeing them, Martin was invited to one of the Oldies anniversary dances, where he joined the club. “I love the club; I think it’s a strong club. When I got to California, they treated me like family,” he says with pride. The New Mexico chapter has been going on for twelve years now, and they currently have five members.

For now, the ’36 is complete and Martin is going to focus on the ’42 Chevy that he is currently building to add to his collection of Chevy cars. “I hope to have it done by next year,” the car trader says. Martin would like to thank his son Martin Jr., his daughter Arreanna, and his wife, Claudia for their constant love and support.

Engine: The stock 207 was restored back to its original factory look.

Body/Paint: The classic was in great condition and didn’t need bodywork or paint, but Martin did need the assistance of Ramos, of C Plating of Sun Valley, CA., to chrome some of the pieces.

Interior: The ’36 boasts the original brown interior, straight from the factory.

Sound System: The Bomb has an original stereo as well.