Newsletter
Sign Up today for our FREE Newsletter and get the latest articles and news delivered right to your inbox.
Home » 1954 Chevy Bel-Air – 1 54 2 NV 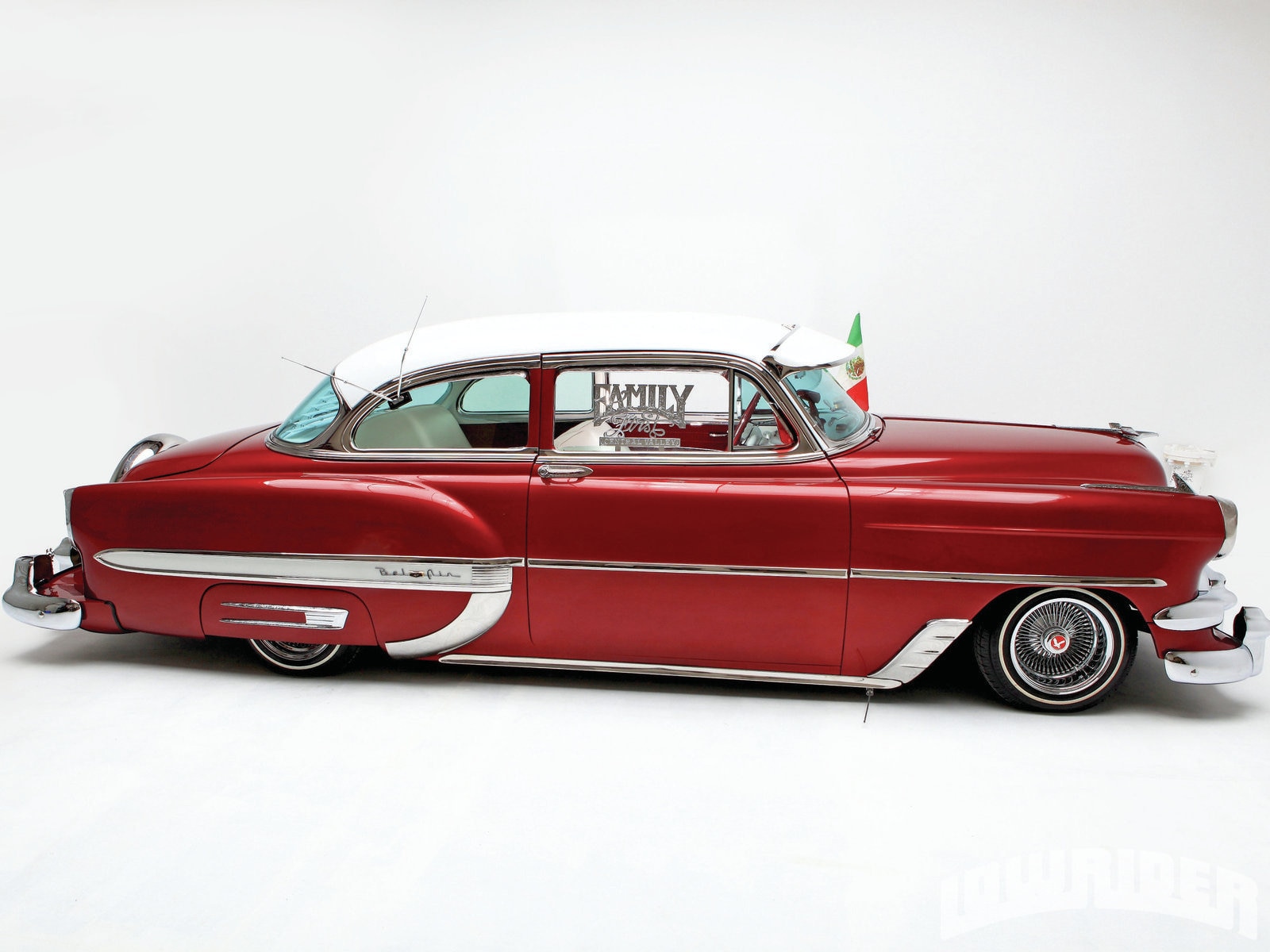 One of the most active Lowrider scenes in the early ‘80s was that of the East Bay Region of California. Back then, the area thrived with an abundance of Lowriders and the streets were abuzz with the roaring sound from these majestic machines. One person lucky enough to be around during this time period in the culture was Sal Alvarez, who spent many days with his two brothers at their grandmother’s home in nearby Daly City, CA. The siblings enjoyed many afternoons on their grandmother’s porch in awe of the amazing Lowriders they saw driving down the block. Sal remembers it like it happened yesterday. “We used to point at the cars and we used to say ‘that’s my car, that’s my car,’” recalls Sal with a smile. One day as they were hanging out on their grandmother’s porch, a red ’54 from Midnight Sensations Car Club passed by and caught young Sal’s attention and he never let go of that vision. “From that day, I knew that one day we (brothers) were going to own cars like those,” he says.

The dream of owning a ’54 never left Sal, although he had grown up and started a family. He chose to move out of the East Bay and while his family became his priority, his search for the elusive ’54 continued. “A friend of mine had a partner that had one for sale in Turlock, CA.,” explains Sal. One look was all it took, and after seeing the car, Sal knew that was the car he wanted and wasted no time in making the deal to bring it home. “When I first brought the car home, my wife told me that the junkyard was down the street,” says Sal laughing. Luckily for him, it didn’t take his supportive wife long before she had a change of heart.

A true team effort, the couple slowly started buying pieces for the car, and the journey to complete Sal’s dream was underway. The car motivated him, and he began doing whatever he could to speed up the process. “Every bit of extra money that I would get from working overtime would be spent on sending out a piece to either get chromed or engraved,” says Sal. While this was painstaking enough, Sal ran into an even bigger mess when attempting to get the ’54 painted. After the car came back from the paint shop with its Candy Brandywine paintjob, Sal noticed that the doors and trunk were a different color than the rest of the car. “I took the car back to the painter and told him that the car had different colors.” The painter wanted to charge Sal the full price to repaint the car again, so Sal was forced to take him to court. “The judge asked me what I wanted, and I simply told him that I wanted what I paid for; to have the car all one color.” The painter agreed to repaint the car, but would not repaint it with any candy colors. Frustration set in and Sal looked for another option, which came to him almost immediately.“The day we were driving home from court, my wife saw a red Lexus, and we decided to go with that color,” he says. The relief would be short-lived as yet another obstacle came Sal’s way; he lost his job. Naturally, he did what he had to do. “Our car wasn’t our priority; it was our family that came first, so it took us longer than normal to complete the build,” he laments.

Nevertheless, Sal pushed on and built this incredible ’54, which you now see before you. When it came time to name it, he looked to the best place a builder can look for inspiration; his family. Sal’s older brother, Jose, joined Nite Life Car Club in the early ‘90s with a mini truck called “1TOY2NV.” “We grew up without a dad, and Jose who is only three years older than me, had to quit school to start working because he had to step in to take on a father role for my other brother, Mike, and I. So the name of my car is my own little way of paying tribute to him because that was the name of his first full custom vehicle,” Sal explains with pride.

Sal would like to dedicate this article to his supportive wife. He would also like to thank Rudy Pena, the Central Valley chapter of Luxurious Car Club, and Chuy, who painted the top of his car. In closing, Sal also wishes to send a special thanks to all of the Family First club members. Great work, Sal!

Engine: Pieces from the 235 were sent out to Mike, at New Metal Finish, in Fresno to be chrome plated.

Body/Paint: The car was originally painted Candy Brandywine but was repainted in a Lexus red color. For an extra touch of style, Chuy was called upon to paint the top of the car white.

Sound System: Sal took it upon himself to install the Kenwood head unit and the Eclipse amps to push sounds to the 6×9 and 6.5-inch speakers, giving the antique auto some modern sound.

Setup: Rollies, out of Modesto, CA., installed the two-pump setup.