Newsletter
Sign Up today for our FREE Newsletter and get the latest articles and news delivered right to your inbox.
Home » 1950 Chevrolet Fleetline – Pan Dulce 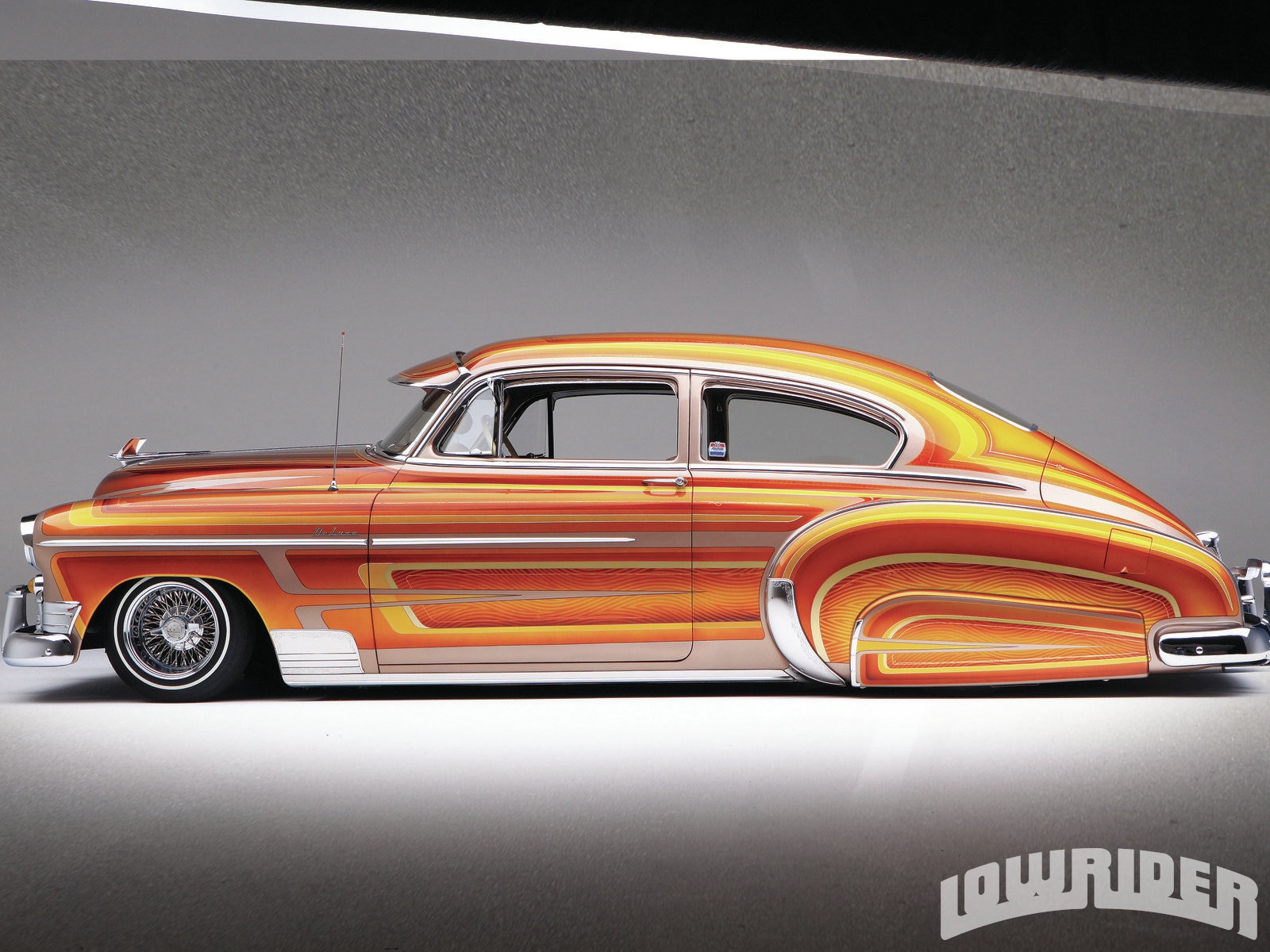 The saying “good things come to those who wait” couldn’t be truer than in the case of Styles Unlimited Car Club President Tino Herrera. This dedicated Santa Barbara Lowrider has waited a lifetime to build the perfect Bomb, which is a symbol of his past and future, while also doubling as a beacon of creativity in the world of Bomb building. Tino’s 1950 Chevrolet Fleetline is a dream come true, and a long time in the making. “I bought the car about 27 years ago,” he says via cell phone. “I’ve painted it several colors but it’s been in its current state for about two months. My car is like Bruce Jenner; its had a lot of facelifts!” Tino’s humor is refreshing, as the serious dream of building cars can often get the best of those involved, and he happily offers a new take on traditional Bomb building―especially thanks to the car’s paintjob. The eight-month paint process saw Danny D capping off a previous Champagne color job by Alex with a dazzling array of candies. “I wanted just a little bit of this and a little bit of that, and as Danny got to painting it, he ended up doing a full candy job. I couldn’t believe how amazing it was when it was done,” Tino says. Aware that he might draw the ire of traditional Bomb builders who generally prefer a more conservative exterior, Tino is excited to bring an outside-the-box approach to the forefront. “When we were done, Danny D said, ‘the traditional Bomb guys are gonna hate you for this,’” he says. “Sure enough, I went to a show and all eyes were on it; but it was hard for some to accept, since I chose to make it so different than the stock style paintjobs. At first, even when I was looking at it, I was a little nervous, but I’m extremely proud of how it came out,” Tino says with a smile . To understand the passion of this incredible project is to take a walk in its owner’s shoes; down memory lane in Santa Barbara.

“When I was a little kid, Rick Valdez and Art Huerta of the Style Unlimited Car Club lived right around the corner,” he says with a smile. “They used to take me around cruising.” Serving as his mentors, an eager young Tino was happy to tag along with these OGs wherever they went. “When I was in eighth or ninth grade, Rick and Art took me to Whittier Boulevard and as we turned onto the street itself, I saw ‘Gypsy Rose.’” Recalling the encounter brings out the kid in Tino, and his voice makes it sound as if it happened yesterday. “I couldn’t believe it! It was my claim to fame, and I told all my friends for weeks that I saw “Gypsy Rose”. Before I had only seen it on TV on Chico and the Man, so for me, it was like seeing Bigfoot!” Tino’s enthusiasm was felt by Art, who let the young boy wash and detail his car before going out cruising. The car was a 1950 Fleetline, and it is this same Fleetline that Tino holds the keys for today. “The Fleetline that I have now was in the Styles Unlimited Club back then and Art said, ‘When you get older, I’ll sell it to you.’” Art Huerta kept his word, and Tino’s ownership of the car has remained a lasting impression of the brotherhood behind the Styles Unlimited Car Club.

While this car has withstood the test of time, it is certainly not Tino’s first foray into building Lowriders. “I’ve had a Continental, an Impala, a Glasshouse, and a couple of other Lowriders; but I’ve always kept the Fleetline,” Tino states. In fact the ’75 Caprice, on which he had a twisted iron grill, was part of the funding process for this Fleetline―as well as for helping his daughter to purchase a car of her own. “I told her, if you can save a thousand dollars, I’ll match it. She ended up saving three thousand! So, I had to buy her a car first,” Tino says with a laugh. Once he got started, the car was built with a lot of trial and error, before he eventually put a deposit down with Danny D to cap it off. While he’s owned the car for over two decades, this build took about a year thanks to the dedicated paint and body work of Alex, the engine and suspension work of Matt Noble, of Noble Fabrications, the interior work by Upholstery Galore, custom engraving by David the Engraver, the immaculate chrome work of Brett aka, “Mr. Impala,” and of course, the amazing paintjob by Danny D. Since the car has been complete, it has garnered rave reviews, and from all the right places, too. The car won “Best Bomb” honors at the annual Nite Life Car Show. Even better, while at the recent indoor show in San Diego, Tino’s true validation was realized. “We came back to the show from dinner and the Tovar brothers were standing around my car. They congratulated me and said my car was one of the baddest Bombs they’d seen. It meant more to me than any trophy I could get. Those guys are such an inspiration to so many builders and it meant a lot to get a compliment and respect from them,” he says humbly.

It is this sense of respect that drives Tino as Club President too, having jumped at the chance to resurrect the club that had given so much to him as a child. “When I grew up, the Style Unlimited guys were like my heroes,” he says. “All the guys that were in the club before me back when I was a kid, they went on to become pillars of society. They went on to become contractors, school teachers, and business owners. I said ‘Man, look at these guys!’ You grow up and you see that these guys also made something of their lives; I want to carry that on, that’s why I help little kids in my neighborhood. They might be working on their first car but I tell them don’t stop, it took me 20 years to get my car to the way it is now; it doesn’t happen overnight.”

After receiving the blessing of original member and creator of the Style Unlimited name, Rob Rocha, Tino took the reins of the club four years ago and hasn’t looked back. He’s ensured the success of the club and instituted a dues system that really helps the younger and struggling members to participate in-group functions. After the incredible build of this ’50 Fleetline and four years of club leadership, it’s safe to say that Tino’s wheels will always be pointed in the right direction. He thanks his family, his son and daughter, and everybody involved with the build. He also wishes to acknowledge all of the Style Unlimited members who preceded him including Val, Rob Rocha, Ben Navaro, Big Jim, Rick Valdez, Vincent Ortiz, Mitch, the Palacios,’ and the Chaves.’

After a life in Lowriding, Tino is still the same humble guy as he even continues to park his 1950 Fleetline at his beloved grandmother’s house. “After she saw that I was finished painting it, she said, ‘your car looks like Pan Dulce, mijo!” We have to agree; it’s one sweet ride indeed.

Engine: The ’50 Chevy now sports a 235 Engine, as Matt Noble, of Noble Fabrications swapped out the original 216 at Tino’s request. The engine also features a Corvette split manifold.

Paint: Alex Bautista originally painted the car a champagne color; he also performed all the bodywork. He also added cut down ’58 skirts with ’58 scuff guards for looks. Danny D. laced this classic with an unreal and bold color combination, defying conventional Bomb wisdom. David the Engraver added his custom engraving at Artistic Impressions Metal and Glass Engraving, while Brett, aka “Mr. Impala” lent his chrome services to the project at his shop in Covina, CA.

Suspension: Matt Noble, from Noble Fabrications, did all the suspension work. He added a four link to the rear end; “c” notched the frame, performed the Fatman fabrication on the drop arms, and rebuilt the front end.

Setup: A two-switch airbag set up keeps this Fleetline scraping the pavement.

Interior: Mike from Upholstery Galore, of Santa Barbara, added a classy tweed interior in a stock pattern, which serves to balance out the bold exterior of this incredible Fleetline.

Stereo: Ian installed an Alpine head unit, Rockford Fosgate Amp, complete with an IPod Hook up and a color bar.