Newsletter
Sign Up today for our FREE Newsletter and get the latest articles and news delivered right to your inbox.
Home » 1942 Chevrolet Fleetline – Mister 42 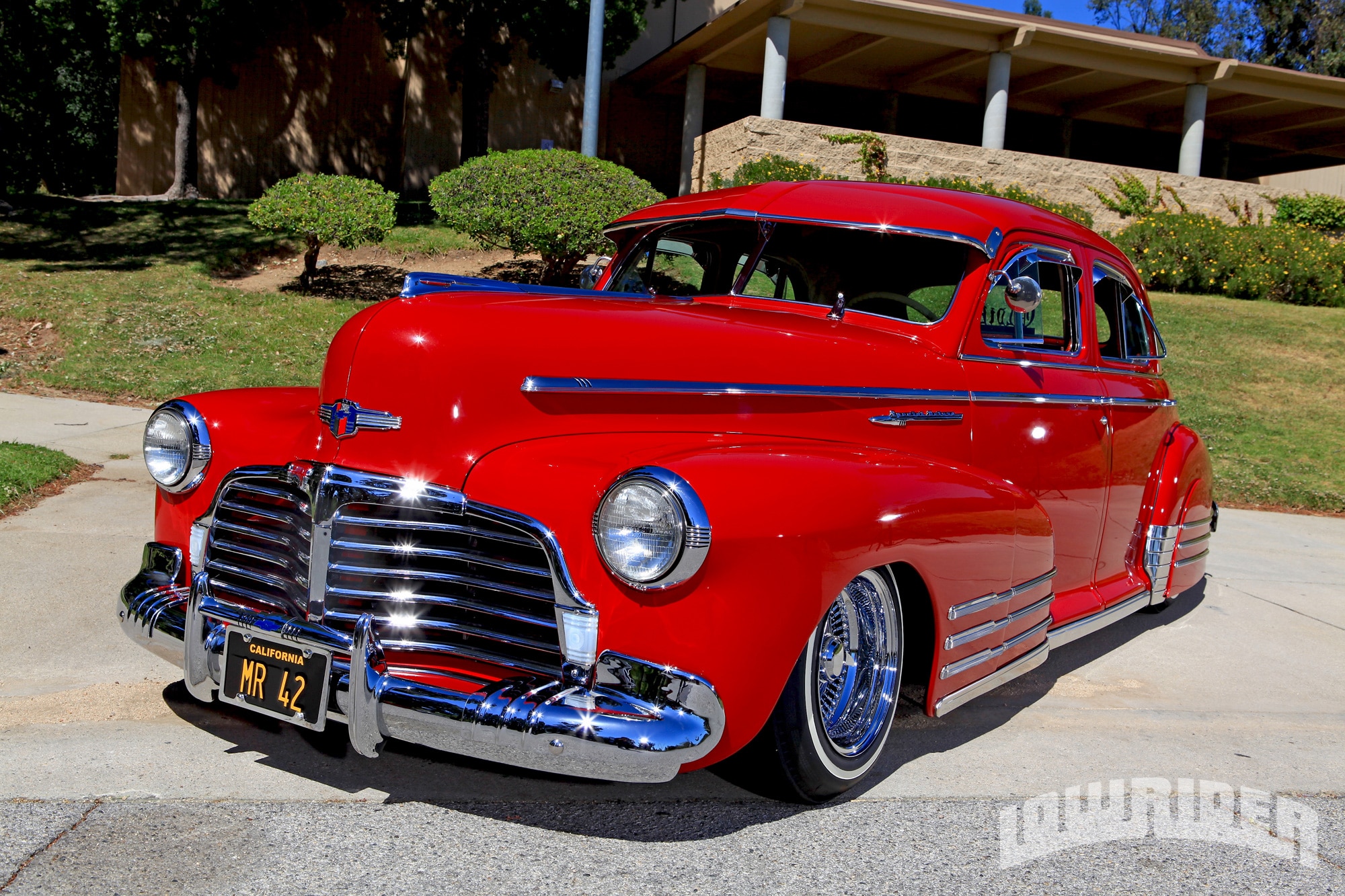 There are two schools of thought when it comes to Lowriding; Bombs or Classics. If you’re new to our scene and don’t think there’s a difference, ask any aficionados of either side of that coin. Bomb enthusiasts are a different breed, preferring to eschew the late ‘50s, ‘60s, and ‘70s in favor of time machines that evoke the images of old Hollywood and Pachuco style. At the age of 18, Carlos Hidalgo began to feel that mentality, as he had a lot of older friends who owned Lowriders. A fan of the culture since he was a young boy, Carlos liked traditional Lowriders, but he clearly had Bombs in his blood. “You can have a Bomb at any age and it will still turn heads,” smiles Carlos, whose interest in bombs started well over thirty years ago.

While he had fixed himself up a fine Chevy Nomad, Carlos yearned for the classic styling of a Bomb and he began hunting them in car classifieds and swap meets. With some luck, he was able to obtain his first Bomb, a 1940 Chevy, by trading it straight across for his Nomad. “The older lady I got it from didn’t want to sell the Chevy but once she saw the Nomad, she traded it straight across,” recalls Carlos. “I know the Nomad was worth more at the time, but I didn’t care,” says Carlos, who was excited to have the last Chevy made with suicide doors and a running board. The major obstacle he faced in reaching his Boulevard dreams was that the ’40 Chevy was not in running condition. In fact, Carlos had to fix the car from the ground up, spending a bit more time and money than he initially thought he would in building the car, but once it was completed, he was one happy cruiser. All good things come to an end, however, and Carlos’ good thing needed to be sold a few years later so that he could have some money to get married.

Akin to Pringles, once you hear those loud pipes pop, you can’t stop, and Carlos again found himself longing for a classic Bomb. Our car habit can only be defined as an addiction, and Carlos was a full-blown junkie, unable to avoid the call of the car horn. He began buying and selling cars, looking for the perfect next project. “I tell my buddies that an old car is just like a woman, you got to have one. They’re beautiful when you dress them up, you have a lot of fun with them, but they make you spend a lot of money. The only advantage with a car is that they don’t talk back,” Carlos says with a chuckle. While he himself had become a one-woman man, he became monogamous in his car search too, falling in love with the 1942 Chevy.

The first’42 Chevy in Carlos’ stable was a car he purchased from his friend, Robert Perez. His love for the ’42 so tickled Robert’s father, that he nicknamed Carlos “Mister 42,” and with good reason. When he finally bought the ’42 being featured here, he had four other Bombs! Since this ’42 was a one-owner car and was more complete than the rest of them, Carlos sold the others in order to have the money to invest on this one. “I didn’t have the money to go thru all the Bombs so I sold the rest off,” he says with a smirk.

When it came time to build the car, Carlos went for the dramatic effect, choosing a bold paint scheme for the ’42. “The reason I picked the color red is because I know “rucas” like the colors red and black,” says Carlos, grinning. Beyond the attention he would get from the opposite sex, Carlos also just wanted a car that would stand out. “I didn’t want to paint it black because if you go to any car show, you will see that a lot of the Bombs are painted black,” he explains. Carlos went through his share of painstaking research in order to get the right red, and he finally found this Salsa Red that stood out. He trusted his paint and body duties to Frank Navarro of Pacoima, CA, who expertly rejuvenated this 69-year-old relic. Seeking a factory look, Carlos resurrected the 216 engine, giving it a pristine, stock feel. With the help of his son, Sergio, Carlos installed a front and rear airbag set up to keep the luxurious ride sitting on a cloud as he drove it down the Sylmar streets. With a refreshed dose of chrome from Astro Plating in North Hollywood, and a stock-style interior custom stitched by Hampton Coach of Hollywood, the ’42 was ready to hit the streets.

Carlos would like to thank his brother-in-law, Rodrigo Rosales, and his neighbor, Randy, who helped him put the car together. “I also have to thank my son, Sergio Hidalgo, for supporting and assisting me with the restoration,” Carlos says with pride.

Engine: Carlos brought the 216 in his Chevy back to life by refurbishing it with a look like it just came off of the factory line.

Interior: Hampton Coach of Hollywood, CA., stitched together the interior to give it an original look.

Setup: Carlos and his son Sergio installed the front and rear airbag set up at their Sylmar home.