Newsletter
Sign Up today for our FREE Newsletter and get the latest articles and news delivered right to your inbox.
Home » 1995 Cadillac Fleetwood – Cadillac Pimpin’ 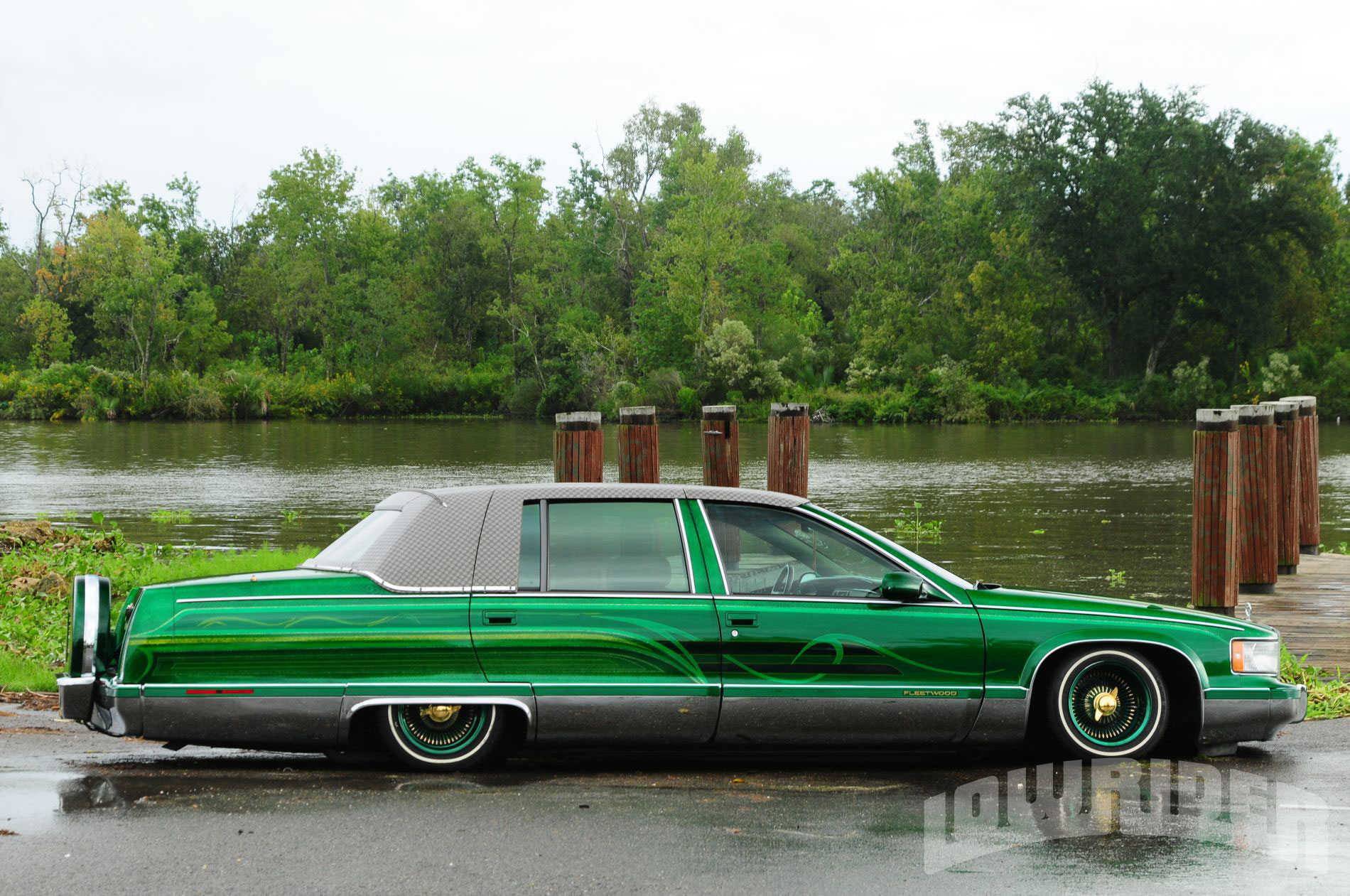 No automaker in the history of our country could ever define the American Dream like Cadillac. For years, the brand has been the status ideal for many hardworking Americans, and their designs, quality, and comfort have made them the forerunner in luxury travel. One such model that exemplifies the Cadillac standard is the Cadillac Fleetwood, which began its long-running legacy in 1947. It was labeled the flagship design and became the most popular Cadillac model for decades. It’s that kind of bloodline that thirty-two year old Scott Buras of Kenner, Louisiana fell in love with. Owning four straight Cadillac vehicles on his roster, Scott found a stock 1995 Cadillac Fleetwood and immediately began work on customizing it.

Having already earned a background in stereo competition, it was a no-brainer that Scott looked to upgrade the Fleetwood’s sound system with the help of R &amp; D Audio in Marrero, Louisiana. With a surround sound and DVD set-up complete, Scott’s desire for cutting edge gadgetry was fulfilled by R &amp;D. Now that his initial upgrade was complete, Scott chose paint as his next area of build focus, and he began searching for a reputable painter that could lay down the creativity and vision that he had for the vehicle. He enlisted Candyman of Corpus Christi, Texas to drop in a deep House of Kolor Kandy Green, along with patterns that flow through the entire body. The paint scheme added the elegant look that Scott needed to match up with the factory design aspects of America’s number one luxury automaker.

After the color combination was brilliantly laid down, it was time for Scott to hone in on making the perfect interior to complement the car’s fancy exterior. In order to accomplish this feat, Scott brought the Fleetwood to Auto Motif in Gretna, Louisiana. The crew at Auto Motif poured their hearts into the design, using a myriad of upgrade techniques. First, the dashboard received a fiberglass treatment and was painted to match the exterior. Once that was completed, the team added green suede to the ceiling and pillars of the car from top to bottom. The seats were wrapped with Gucci and leather and the controls were modernized and given a digital treatment. Capping off the car’s opulence was a set of Player Wire Wheels which were anodized with a mixture of green and gold and fit onto the big body. A full flat-panel television monitor was outfitted into the fifth wheel compartment, while a Plexiglas cover was added to the screen for weatherproofing.

Quick to stress that he did not intend to build a trailer queen, this dedicated member of Homies C.C. out of New Orleans, Louisiana, takes pride in his custom choices and can be seen on a daily basis in “Cadillac Pimpin’.” “I want to thank my family, friends, and most importantly, my car club for recognizing my potential,” Scott shares with us, “It’s a dream come true for me to grace the pages of the magazine I grew up reading.” With Scott’s dedication and passion towards building a unique Cadillac Fleetwood, it was only a matter of time before it was noticed, and we are happy to give it some well-deserved shine. n

Interior: The dashboard was rebuilt in fiberglass and painted to match. The seats were wrapped in leather and Gucci material, along with the exterior top. Green suede was used on the ceiling and pillars down each side. Auto Motif in Gretna, Louisiana handled the install.