Newsletter
Sign Up today for our FREE Newsletter and get the latest articles and news delivered right to your inbox.
Home » 1968 Chevrolet Impala – Henderson Hustler 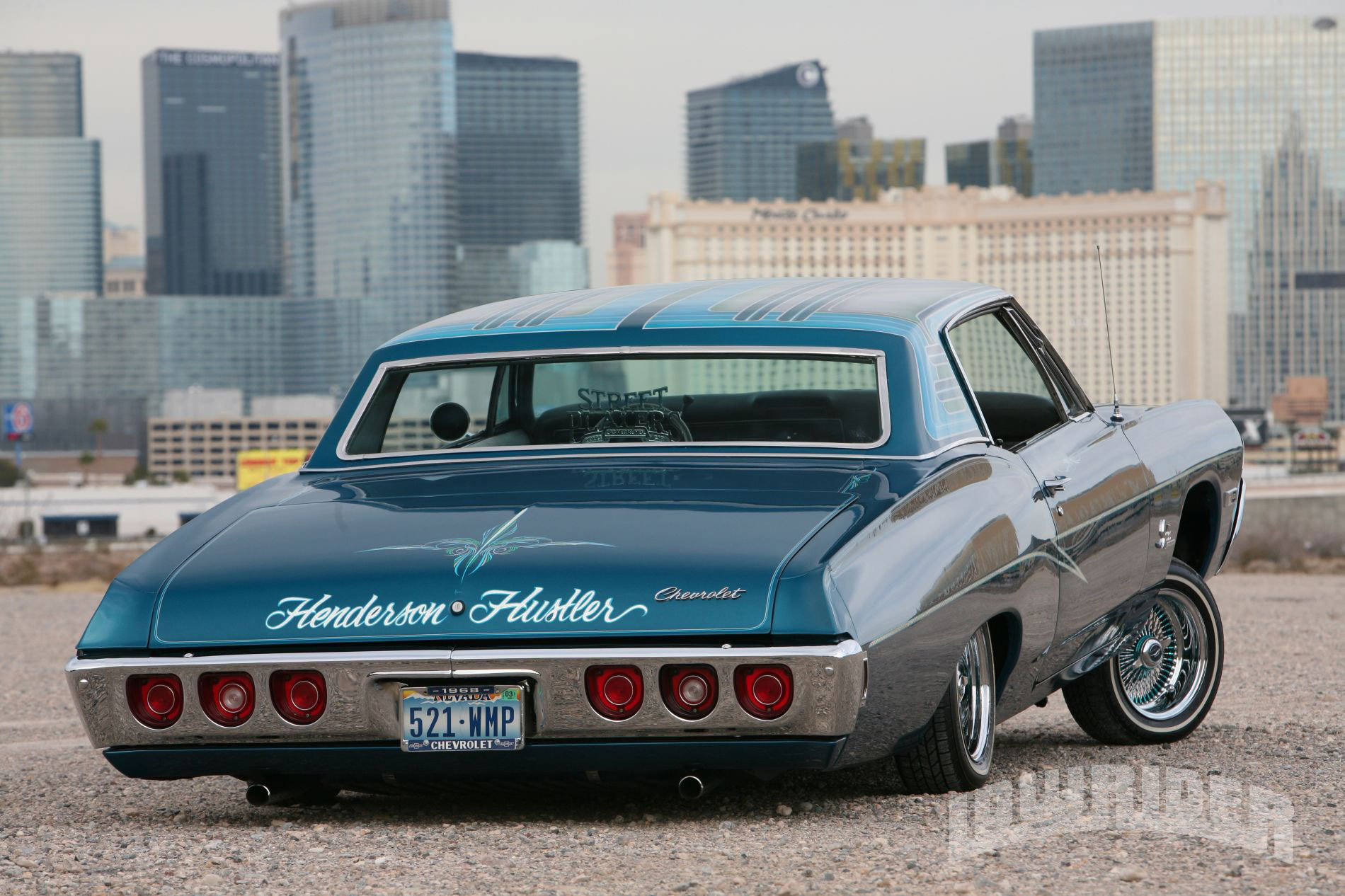 Being surrounded by our culture of Lowriding at an early age almost always dictates success in building dream machines. A great example of this comes to us this month in the form of Jerome Marquez, a tried-and-true product of his Lowrider environment. “My dad, John Barlion, had partnered with a guy from Las Vegas and they had a shop called Heavies Hydraulics,” states Jerome with a firm voice. “I grew up around the Lowrider lifestyle my whole life.” Jerome’s father has had the shop since Jerome was just a kid, and the influence rubbed off on the young man considerably.

At the age of fourteen, Jerome received a ’65 Impala as a gift. The gift came courtesy of the father of one of Jerome’s close friends. Touched by the gesture, Jerome holds the project in high reverence. “It (the ’65 Impala) has a lot of sentimental value to me,” says Jerome. The ’65 is a frame off project that Jerome is currently working on; taking his time to make sure every detail is done right. Given the enormity of the project, Jerome began to feel a bit impatient in needing something to drive in the meantime, in order to cure his Lowrider fix. Around the same time, his longtime friend, Lance Charles, had moved to Utah and was looking to sell his ’68 Impala. This was a car that Jerome was all too familiar with, as he had helped Lance reinforce it, lift it, and assisted him in the rebuild of the motor and the transmission. Jerome immediately saw an opportunity to not only secure a Lowrider that he was already familiar with to serve as a daily driver while he worked on his ’65, he also saw the chance to financially help out a friend in need. “I had helped him drive the car to Utah, so I knew the car was reliable,” says Jerome. “It drove like a new car.” The ’68 had a’98 Vortec engine with fuel injection. While the functionality of the car was in great shape, there were parts of it that needed a bit more attention. “The car was a decent driver but needed paint and interior,” says Jerome.

As is the case with most Lowriders, the final build far exceeded the initial idea. “The car wasn’t supposed to be what it is,” says Jerome with a laugh referring to his ’68. What started out as a quick fix, transitional project became a bit bigger in scope, thanks to the fact that it is now patterned out and complete with a chrome undercarriage.

When asked what the motivation was behind the car being given the moniker “Henderson Hustler,” Jerome wryly responded, “I named the ’68 that because I’m a hustler and I’m from the city of Henderson.” Jerome’s hustle consists of buying, building, and selling cars. “I build them and flip them, build some more and flip them, too,” he says with the pride of a true auto builder.

Throughout his career in Lowriding, Jerome has certainly built many Lowriders for himself and countless others, but this ’68 gave him a new goal in car building; to make road-worthy cars that can turn heads and also find their way into the pages of Lowrider Magazine. Jerome would like to thank Lance Charles, Robert Jasso, and his dad John Barlion. We at Lowrider Magazine can’t wait for the debut of his ’65!

Body/Paint: Buying the car in decent shape, Jerome took the ’68 to Guero’s Customs in Las Vegas, who laid the Teal DuPont candy paint, while Robert Jasso of No Limit took on the task of patterning out the top. Gary Jensen finished it off by striping it.

Interior: J&amp;S Upholstery out of Henderson, NV stitched up the gray velour interior. The dash was painted to match the car, and a color bar and custom steering wheel were added to finish up the interior.

Setup: Jerome and Robert Jasso reinforced and juiced the car before Jerome bought it, but he still had to update the setup by hard lining the two-pump Black Magic set up.