Newsletter
Sign Up today for our FREE Newsletter and get the latest articles and news delivered right to your inbox.
Home » 1967 Stingray – Mysterious Candy Cruiser 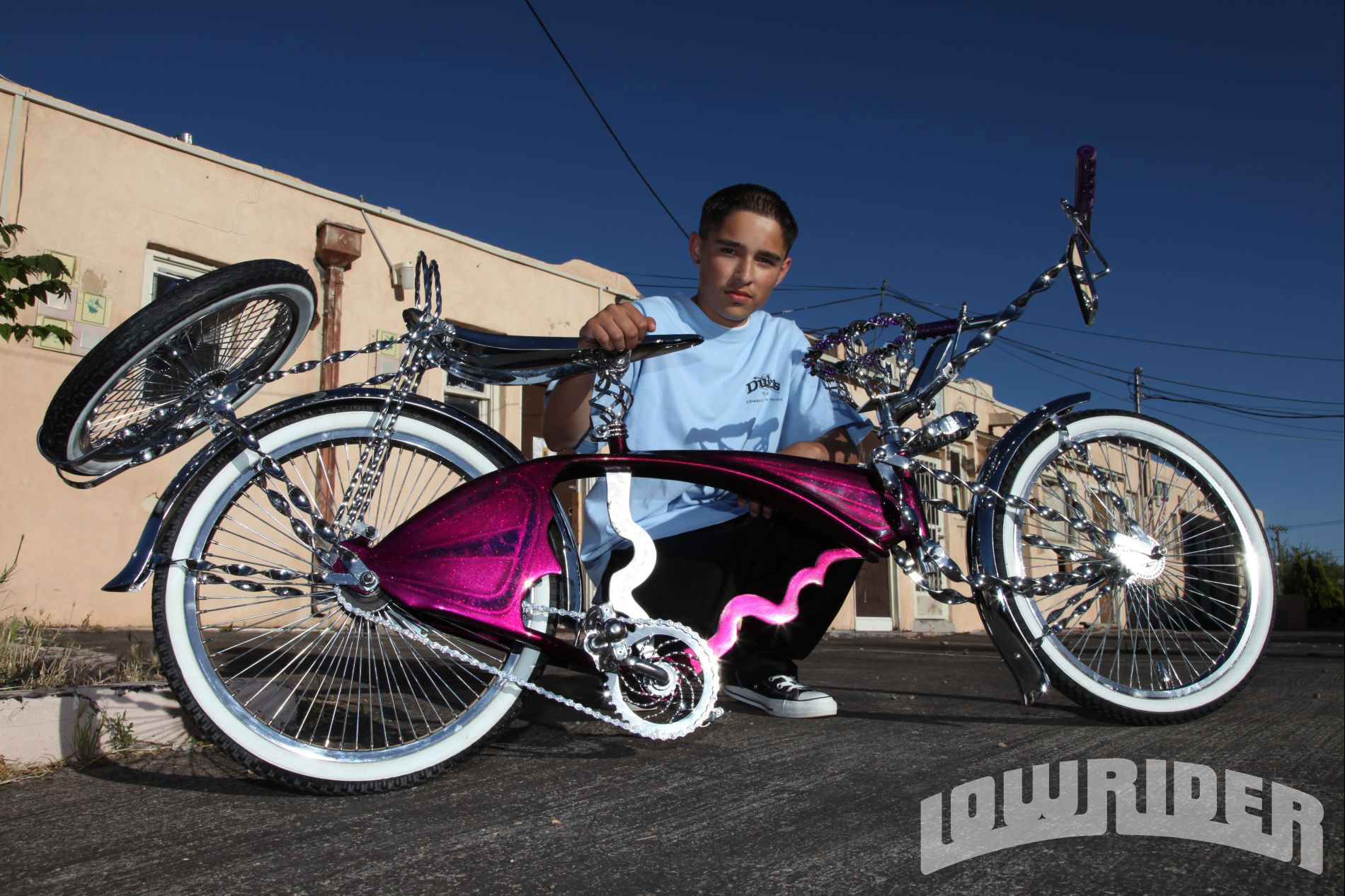 The Four Corners area has long been a hotbed of curious activity. For years, Ufo sightings have been reported in these states, as the desert basin serves to be a proper backdrop for strange objects. The Albuquerque streets have reported a new phenomenon; a sort of two-wheeled monster that glimmers in the daytime as much as it does in the dusk. More than one resident has reported seeing this vision, and with a paint job so vivid, we are convinced that it cannot reside in the dreams of the subconscious and therefore must be real! We turned to 15-year-old EJ Vargas, of Albuquerque, New Mexico for clues about this mysterious desert machine.

Though he is in his teens, EJ is already a bonafide Lowrider enthusiast. “I started getting Lowrider Magazine at the age of five; I always liked Lowrider cars and bikes,” he says with a smile. Thanks to a loving mom, EJ’s Lowriding career began at an early age. “When I was nine-years-old, my mom got me my first bike for Christmas!” Some four years later, EJ would start to customize that very bike. As he tinkered with design and materials, he became aware that Lowriding was in his blood, and would most likely be a lifelong obsession for him, albeit a positive one. He began to pull from a variety of influences, and something he saw at 13 forever changed him. “Around that time I saw Fernando Ruelas on the Tv show “Living The Low Life” talking about the history of the Duke’s Car Club and that’s when I knew I want to be a Duke’s member,” says EJ. All aspirations aside, EJ knew he needed to put in more work as a customizer to make himself worthy of such a lofty affiliation, so he got to work on a second bike.

This bike came in 2009, when EJ purchased a Schwinn frame off a friend for twenty bucks. While he excitedly began envisioning his masterpiece, an even bigger occurrence put pressure on him. It just so happened that his grandma knew a Duke’s member and had arranged for EJ to meet with the local chapter in May of 2009. That member turned out to be Albert, who would introduce the teen to the rest of the club. One Duke’s member in particular, Jerome Rocha, would become instrumental in helping EJ create his dream Lowrider bike.

Jerome is not only a Duke’s member, he also owns Southwest Choppers, an amazing customization center in Albuquerque. Jerome invited EJ to bring his frame down to the shop so he could “break it.” EJ became a student of the game quickly, as he studied how to get into the bike’s frame by cutting into it, learned how to make templates out of cardboard, and gained an understanding on how to use both the plasma cutter and the mig welder. Given his huge interest, EJ took to it like a fish to water. “I picked up on it real quickly, Jerome showed me how to do the body work, but I didn’t paint, I was too nervous,” EJ says with a laugh. While he had already done an excellent job with the body work, Jerome agreed to paint the bike for him. This project couldn’t have come at a better time, as the Lowrider Experience was soon to be held at the State Fairgrounds, and EJ wanted to be ready to prove that he belonged to the scene.

Upon the completion of EJ’s bike, it incorporated everything necessary to be a show stopper in the two-wheel world. Jerome’s House of Kolor finish features patterns over EJ’s exquisite metal and fiberglass work, while La Chirapa Bumper Chrome in Socorro, Texas, added all of the chrome plating. Lest we forget to mention the wheels on this mystery craft are baby Dayton wire wheels, giving the bike true presence from top to bottom.

Finally, the crowd at the Lowrider Experience could bear witness to this curious object that had set New Mexico ablaze and abuzz with the talk of curious residents who had already laid eyes on this desert phenomenon in the streets. We’ve got to hand it to EJ, too. After all, making it to the LRM show and getting a feature in Lowrider Magazine isn’t too shabby a feat for a first time cruiser! Let’s see what EJ comes up with the next time we visit the Duke City!