Newsletter
Sign Up today for our FREE Newsletter and get the latest articles and news delivered right to your inbox.
Home » 1960 Chevrolet El Camino – Questa 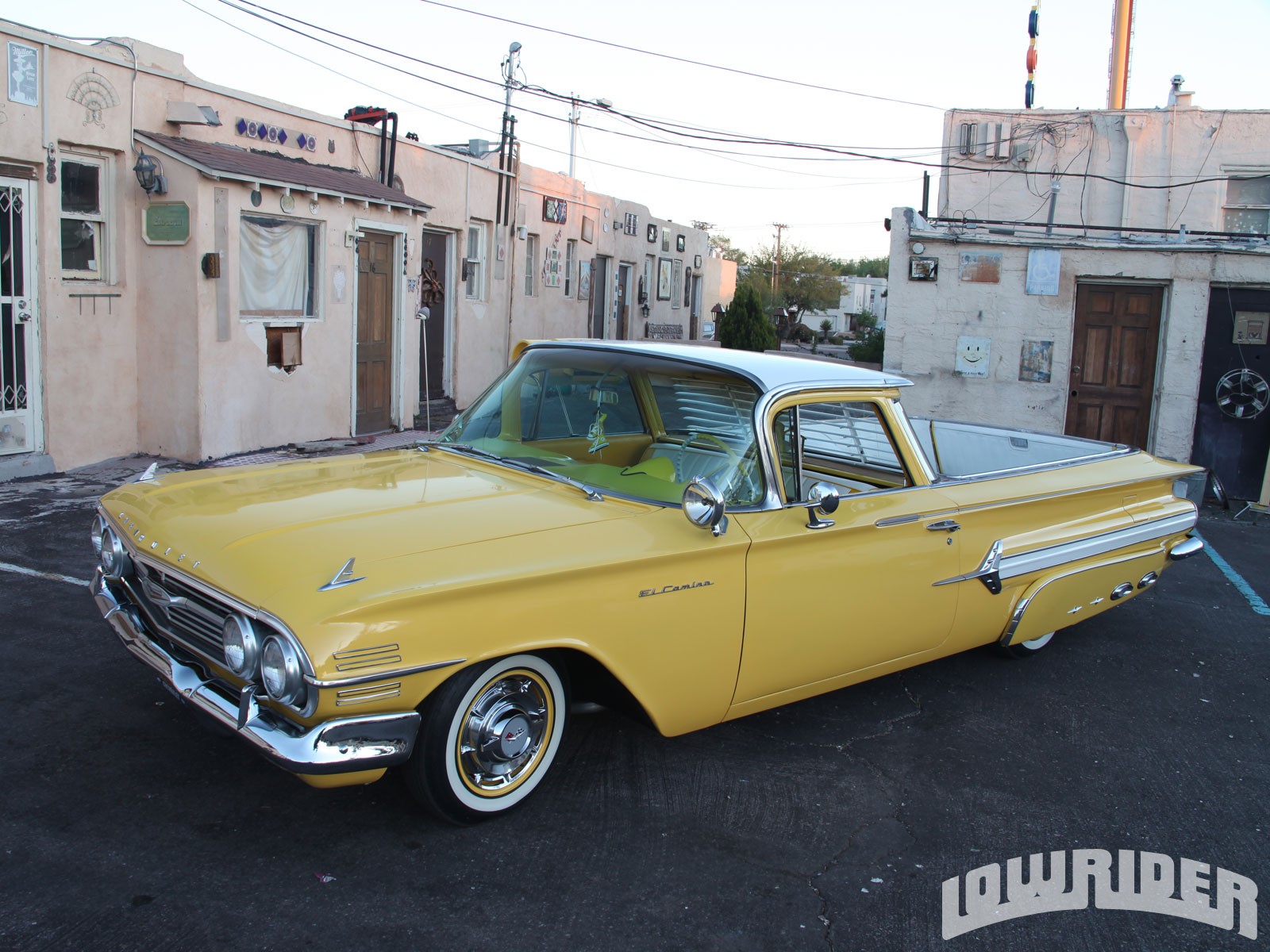 Believe it or not, this clean 1960 Chevrolet El Camino was once owned by Orlando “Orlie” Coca. Yes, the same person who started Orlie’s Hydraulics and Orlie’s Lowriding Magazine back in the day. The ride was actually sold to the president of the Duke’s car club over in Albuquerque, New Mexico, before being sold to another member, and then ultimately ending up in Albert Muñoz’ hands.

“In 1996, I purchased the car from my brother for $2,000. From time to time, the car was worked on and I was able to drive it for a while. The car then sat for some three years in my backyard,” reminisces Albert. “In that time, I had plenty of offers to buy it from me, and in 2002, my future wife-to-be, Carla Jean, said to me, ‘why don’t you fix that old El Camino? It would be cool to be able to take it out on Sundays for a cruise.’ The very next week it was shipped to my club member’s shop called, “My Mechanic,” Albert says with a smile. Finally, Albert’s El Co was going to be put through the muscle makeover it needed.

Shop owner Steve Jimenez tore into the motor for a total rebuild of the factory 283-cid, and when he was finished with the inside, he dressed it up with a bright yellow finish. The engine features Camelback heads, a mild camshaft, electronic ignition, updated power steering, and power brakes. The transmission is a Power glide, and the exhaust system is a Pro Flow.

Albert’s brother-in-law, Ralph Melendes of Laser Rock, added some fine bodywork along with the DuPont sunburst Yellow and White paint scheme. The car was reassembled with the help of his vecino, Ralph. Albert’s other vecino Henry Aragon of Henry J’s hooked up the three-inch pleated matching interior panels to the two-inch seat pleats. More Impala touches can be found inside the dash trimming, and the carpet treatment was finished in a Carmel color. Audio Express of Albuquerque, New Mexico installed the combination of Boston Acoustic separates and Kenwood electronics, which feature satellite radio at the touch of a button.

A set of 14-inch OG rims with their original wheel covers, and Coker 5.20 tires with 1-¾-inch White walls add the touch of class he was looking for on this vintage El Camino.

Other noteworthy items include 12-inch cruiser skirts with scuff plates, portholes, and Buick star emblems, a unity spotlight, venetian blinds, a tissue dispenser, bumper guards, door handle guards, and a Thermadore car cooler. Additionally, incorporating 1960 Impala moldings with the stock trim and ornamentation, Albert has altered the exterior of the El Camino, while still giving it a clear identity true to its roots.

“I’d like to give special thanks to my brother, Jerome Muñoz, for teaching me how to Lowride, and my wife Carla, for putting up with me.