Newsletter
Sign Up today for our FREE Newsletter and get the latest articles and news delivered right to your inbox.
Home » 1947 Chevrolet Fleetline – Bad Assets 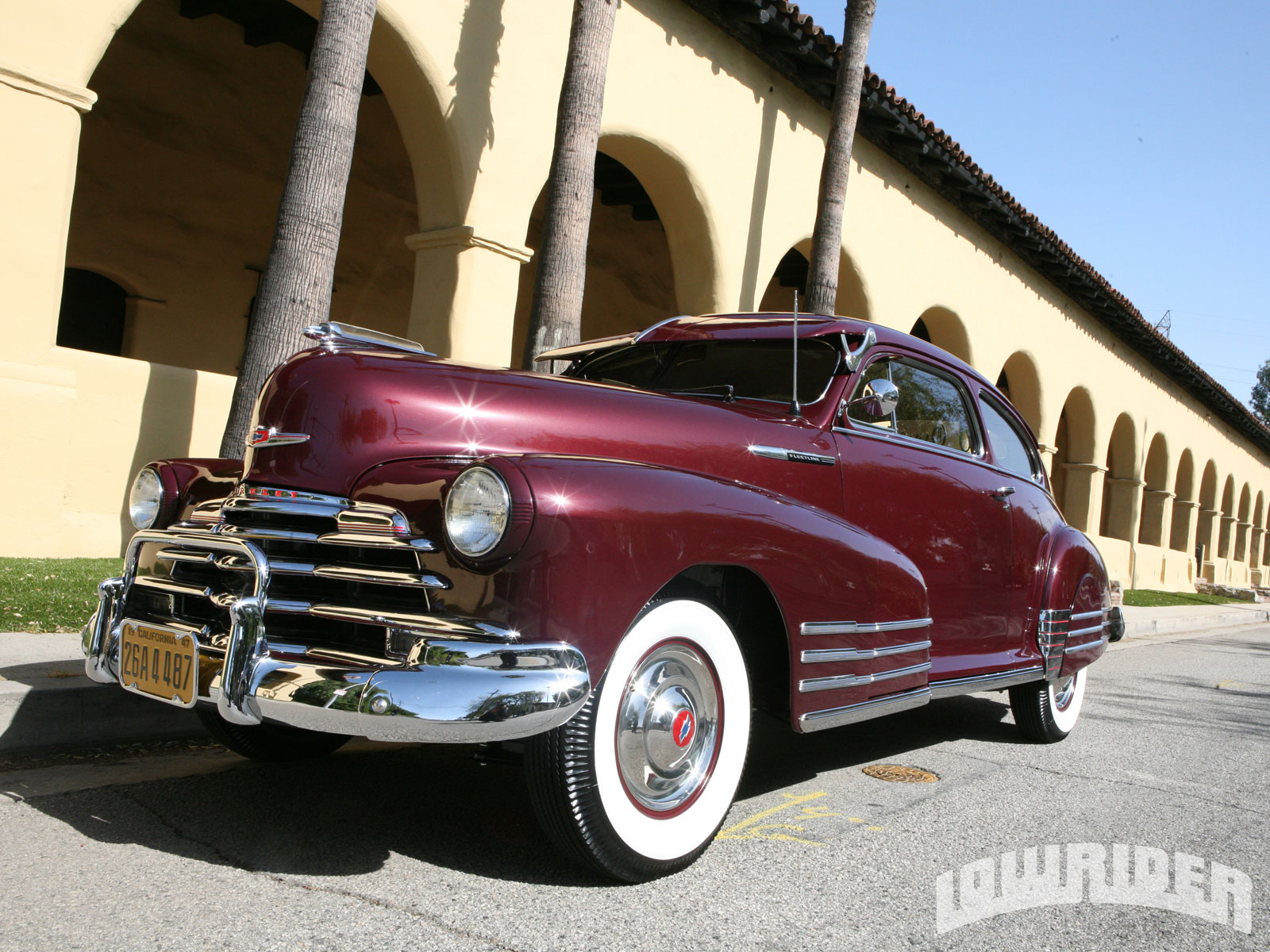 Lowriders become addicted to the low and slow culture in a variety of ways. Most usually become inducted into the lifestyle through family or friends. A childhood growing up with an uncle or brother giving them a first ride; a friend’s older sister or brother granting a first glimpse into the Boulevard, and so on. Every once in a while, a Lowrider finds their way into the culture through an unlikely method; Martin Acevedo is one such case. Currently a self-employed Construction Worker from Sylmar, CA., Martin actually got into the culture from a former form of employment! As a teenager, Martin got a job detailing cars through one of his friends. “One of my friends asked me if I wanted to go to work, so I did,” says Martin with a deep voice. Happy to have a job opportunity, Martin started detailing cars for a mobile detailing company. After gaining some experience, he got into color sanding and buffing cars. While he was always appreciative of the style of Lowriders, Martin’s passion for classic cars grew tenfold because of his mobile detailing job. After he elaborated on a few of his experiences, it was easy to see how he had gotten hooked. Fate allowed Martin to detail a lot of classic cars for car clubs, and some of those cars just happened to belong to Ricardo Alvarado, president of the Oldies Car Club. “I’ve known Ricardo since I was eighteen years old,” beams Martin. “One of the reasons I got into Bombs was because I used to detail all his cars.” With access to some of the finest Bombs in California, who wouldn’t become an avid enthusiast of the Lowrider lifestyle?”

The mobile detailing business Martin worked for had moved into a shop, which turned out to be a blessing in disguise, as not too long after the move, Martin started his own business. He decided to take what he had learned over the years and go into business for himself. “I started buying cars, fixing them up and slamming them,” he says with pride. Of course, sometimes in our culture, ambition exceeds financial means, and Martin’s ability to build his dream Bomb was slightly out of reach for him. In fact, it wasn’t until six years ago that Martin was finally able to purchase and restore his first Bomb, a ’49 Plymouth. During the build of the Plymouth, Martin would call on his old friend Ricardo for leads on finding Bomb parts. In no time, he had a few Bomb builds under his belt, and decided to look for the highly coveted Fleetline for his next project. It was on one of his parts runs that fortune struck Martin, as an old man told Martin that he had a Chevy Fleetline for sale. “He showed it to me and I liked it.” The car had no rust, and almost every part of the vehicle was there. “I didn’t have to go around looking for parts, I just had to strip it down, re-chrome, and restore everything,” Martin says, with a relieved tone. Martin left the man a deposit and picked up the Fleetline the following day.

Realizing the car was truly his for the making, given the shape it was in, Martin wasted no time in getting down to business. “I took it home and took it off the frame,” he says. Martin basically restored the whole car inside and out, one nut and bolt at a time. He went the extra mile with the car, powder coating and painting every inch of it, revealing this example of Bomb perfection.

Once completed, Martin took his ’47 Fleetline to the Lowrider Magazine Super Show in 2010, where he placed 2nd in his class. Martin would like to thank God Almighty, his family for putting up with him while he worked on his car day and night, and his friends and Oldies car club members for their constant advice and support.

Engine: Adrian from The Best Auto Service in Sylmar, CA., helped bring the 216 back to its original state.

Paint/Body: Victor from Ground Up in Sylmar handled all the bodywork before giving the Fleetline its Burgundy paintjob. Every aspect of the car that was available to be powder coated received treatment. Chemo at A&amp;C Chrome Plating in Pacoima, CA., handled all the chrome work on the Bomb.