Newsletter
Sign Up today for our FREE Newsletter and get the latest articles and news delivered right to your inbox.
Home » 1987 Chevrolet Monte Carlo – Hood Tattoos 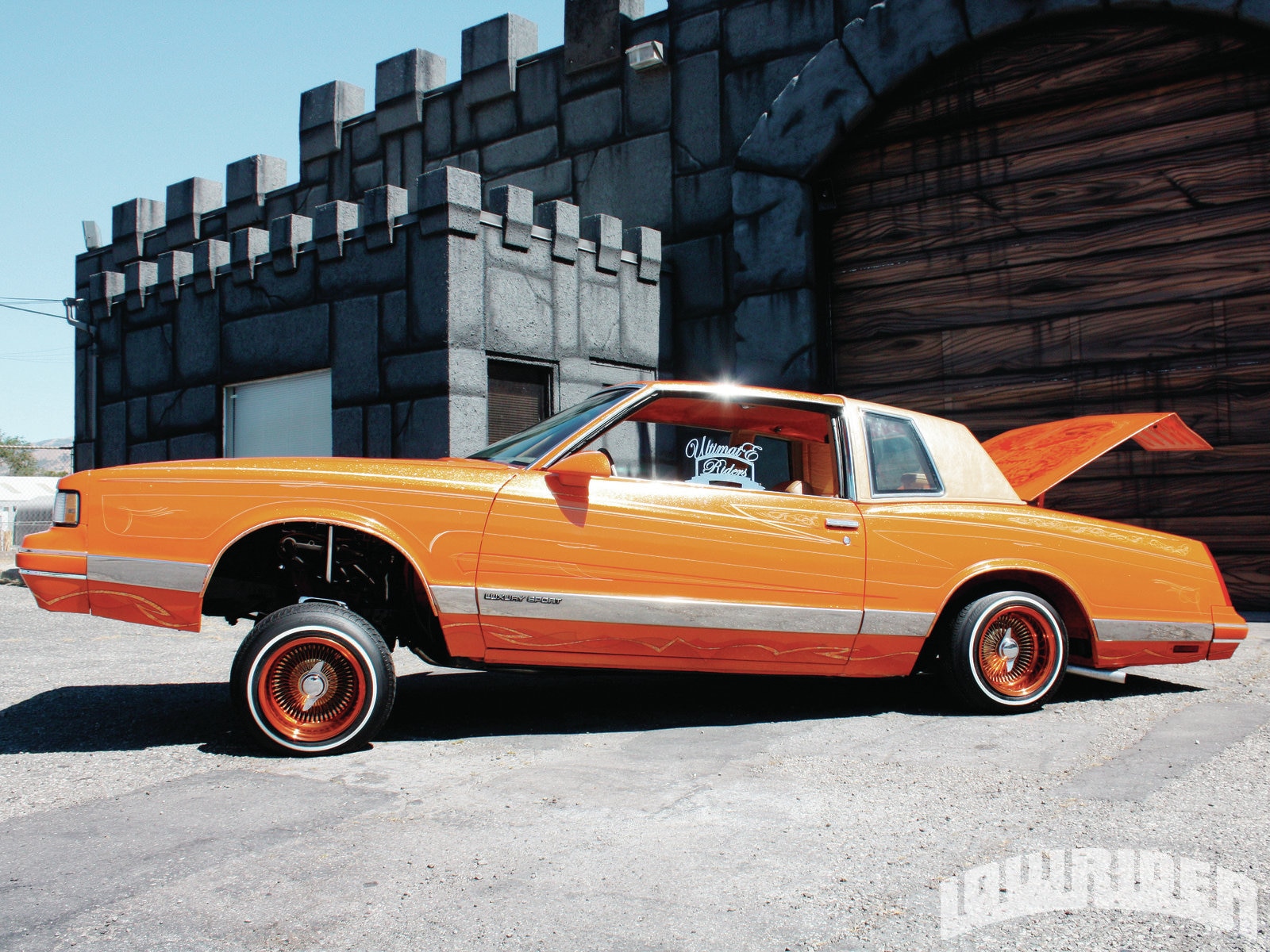 When Salt Lake City’s Albert Gallegos purchased his 87’ Monte Carlo, his intentions were simple’ “I just wanted something to cruise this year.” Seeking to hit the streets in a big way, Albert still looked to find a car that would fit his sense of style as well as his immediacy. Lowriding since the tender age of 13, Albert is definitely a Lowrider who knows what he wants. “I first started with Lowrider bikes,” he recalls. As a young teen, he began working his way up the building ladder, honing his skills on cars. Pouring his blood, sweat, and funds into personalizing his bikes and rides, Albert was well on his way to Lowrider supremacy.

“My father was my inspiration behind this car frenzy,” Albert states proudly. “He restored and built a lot of hot rods as well as muscle cars, So I guess you could say ‘the apple does not fall from the tree.” Indeed it doesn’t, and with a selective eye, Albert was originally on the hunt for a Cadillac. He hunted for a year straight, searching and observing diligently, but with no results. Like any true enthusiast, Albert is enamored with many different car models, so he shifted gears based on what he was finding. Finally, a car caught his eye; a 1987 luxury sport Monte Carlo. To his delight, he was instantly hooked and began to secure his purchasing funds for the Chevy. “It was a hectic trip,” he laments.

His journey was quite the excursion. He picked up the car in Fresno, CA., drove it to Norco to have it serviced by Ultimate Hydraulics, and then ventured back home to Salt Lake City. “It was a long and very exhausting trip, but so worth it,” he beams.

First involved in the build, Ultimate Hydraulics tore out the hydros, and gave the Monte an all-new plumbing set up with three pumps powered by six batteries. In the meantime, Jessie Hernandez of Hernandez Customs &amp; Upholstery in Fresno, CA., threw down some stitch work on the interior and upholstery. He used leather with suede inserts and orange tubing, with a complementary orange carpet to set it all off.

At the time of the build, Albert was designing the car to his specific desires, and a certain local music artist named Lump Sum caught his attention. “One of their songs just seemed to fit,” Albert explains. Inevitably, the name “Hood Tattoos” was born. He took the idea to Raymond Mata and further explained it, needing Mata to incorporate the Ultimate Riders plaque on his trunk. “From there, the artist ran with the idea and created the best mural I could have imagined,” he says. It was a perfect fit for his concept.

“When I finally received my completed piece of art and witnessed all the hard work, I decided to enter into the “Autorama” at South Town Exposition Center,” states Albert. The move proved to be a good idea, as he took home a “Best of Class” award with the Monte. He also did well at Victor’s Tires Show taking “Best Ride” honors and received a “Best Artwork” award at Mestizo Art Festival in 2010. Not too shabby for its first year in completion!

Before he could rest on his laurels, another problem arose. “The day before I was scheduled for a photo shoot, my transmission decided to go out on me. I had to work endlessly to get a new one up and running in just 24 hours,” Albert says with a sigh. Determined not to reschedule, the intense work began all night and lasted most of the morning as well, until it was all complete. “Talk about cutting it close,” he laughs. With the help of his close friend, A.J., Albert rolled fresh and clean onto the shoot with the new tranny intact. “Who knew just wanting something to cruise for the summer would have taken me on a journey of such labor and satisfaction?” Albert would like to thank; all my Ultimate family, A.J. Sandoval, Matt Smith, Tee and Vmax from Ultimate Hydro’s, and Nick Peck.

Muralist: Raymond Mata at Ultimate Hydraulics, Fresno, CA. Mural is Ultimate Plaque surrounded by girls and skulls as well as “LS” and a couple of clowns in the mix.