Newsletter
Sign Up today for our FREE Newsletter and get the latest articles and news delivered right to your inbox.
Home » 1982 Cadillac Le Cabriolet – Klique Edition 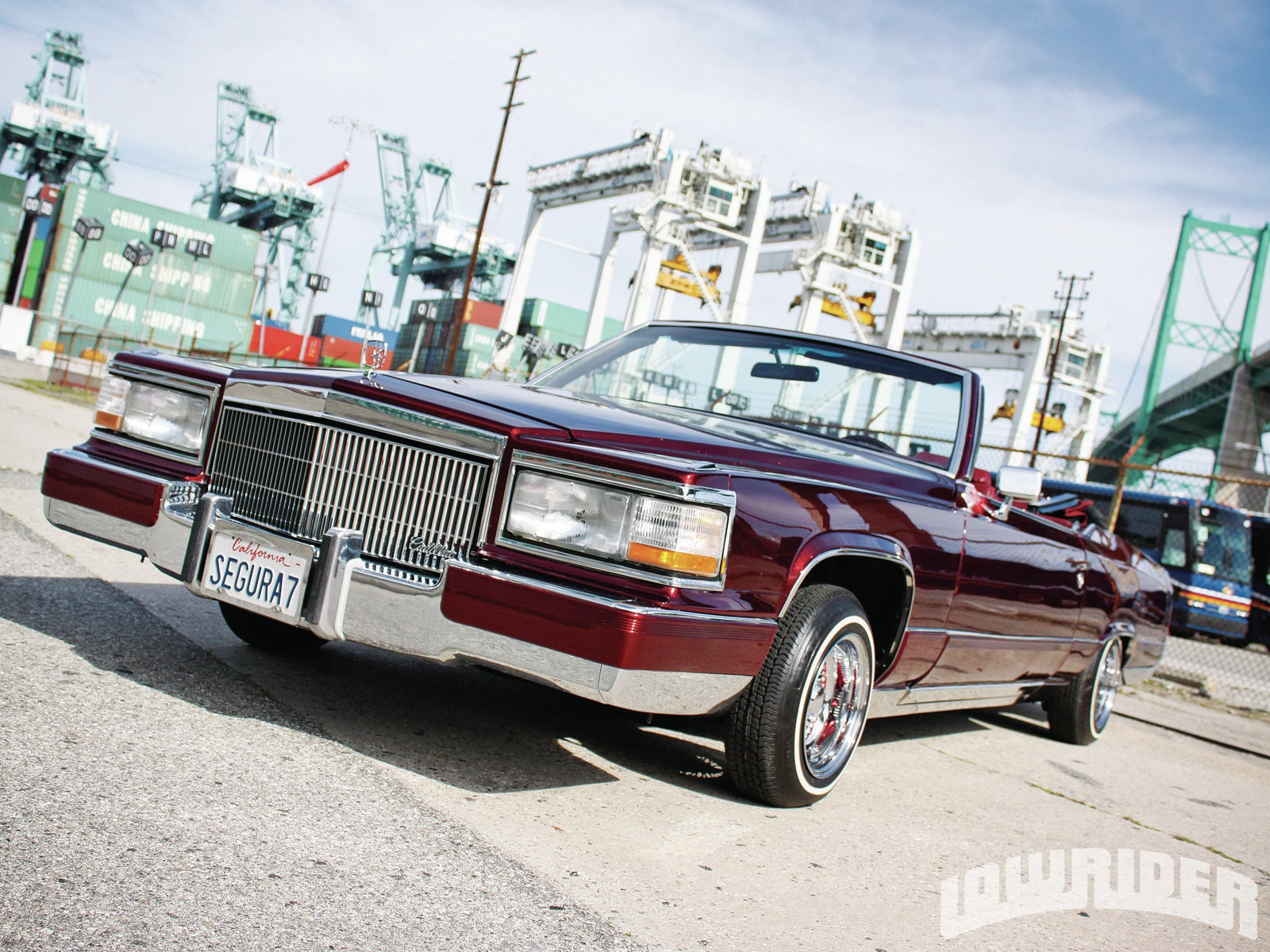 Longtime LRM readers may remember seeing Oscar Segura’s name more than a handful of times over the years. Oscar seems to be somewhat of a trendsetter and artist on wheels, building and owning some of the cleanest and most memorable Lowriders in Orange County, California, and beyond. New for the 2011 cruising season, Oscar unveils another ragtop for the streets; a rare Cadillac coupe convertible known as the “Klique Edition Le Cab.”

This Cadillac Le Cabriolet was one of the very few premium luxury convertible rides in it’s day. It is even harder to find a Le Cabriolet nowadays, and if a person does happen to find one, they’re usually in pretty rough condition. Oscar’s ride was no different than the average fixer-upper and it was definitely considered a project car. Rust issues throughout the Caddy’s body and undercarriage were just the tip of the iceberg. Many parts would have to be cleaned up, rebuilt or replaced. Oscar was able to use two donor cars he bought from Mike Lopez, of Cadillac Connect in Orange, California, to provide the parts he needed to help get his ride up to par within this four-year project.

Being in the well-known and well-connected Klique Car Club (Orange County Chapter) definitely helped get Oscar in touch with the right people to get the interior and exterior in like-new condition. A new convertible top, a new audio system, and a new set of rims and tires completed this ultimate luxury ragtop. Oscar says he’ll opt out of the common customization of hydraulic suspension because he’d like to keep his Caddy as close to a stock luxury as possible. The rims and tires stand to just define the Lowrider look that Oscar loves.

As if this Le Cab wasn’t enough for one man, Oscar had gone on to desire more, by buying himself a brand new 2009 Harley Davidson XL883 Iron motorcycle. Complimenting the Caddy perfectly, the Klique Edition Harley was also painted in a candy brandy wine color with large metallic flakes. Armando Gonzalez of Santa Ana customs built the bike to Oscar’s specifications, and the additions were then followed-up by George Moreno’s paintjob. The late Bob Iverson of Fountain Valley, California, finished off the two-wheeler with some elegant pinstriping.

Oscar gives big thanks to all those individuals who helped build his Klique Edition rides, including Hector Hernandez, Alex at Big Al’s, Big G, Yastuvo, Alex and Stranger of Orange County. Oscar says now that this ride is street-worthy; he dedicates it to his beloved brother, Diego Segura, the former member and founder of Klique’s Orange County chapter.

Body/Paint: Oscar kept his Caddy in its stock elegant form, opting to stay away from body modifications. He elected Johnny from Fine Car Auto Body in Santa Ana, California to prep the body for paint, and Tony sprayed the candy brandy wine color with large metallic flakes. For the extra mirror-like shine, Alex Placentia from Big Al’s in La Habra, California re-cleared the paintjob, and George Moreno of Santa Ana color sanded and buffed out the final finish.

Sound System: Jose “Yastuvo” Mendoza at J &amp; J Customs in Santa Ana took lead in the audio entertainment installation. A Kenwood head unit and two Kenwood amplifiers were hooked up to a pair of tweeters, a pair of mid-range speakers, and a pair of woofers to provide the best sounds while bumping the oldie jams.