Newsletter
Sign Up today for our FREE Newsletter and get the latest articles and news delivered right to your inbox.
Home » 1962 Chevrolet Impala SS – Magnificent ‘62 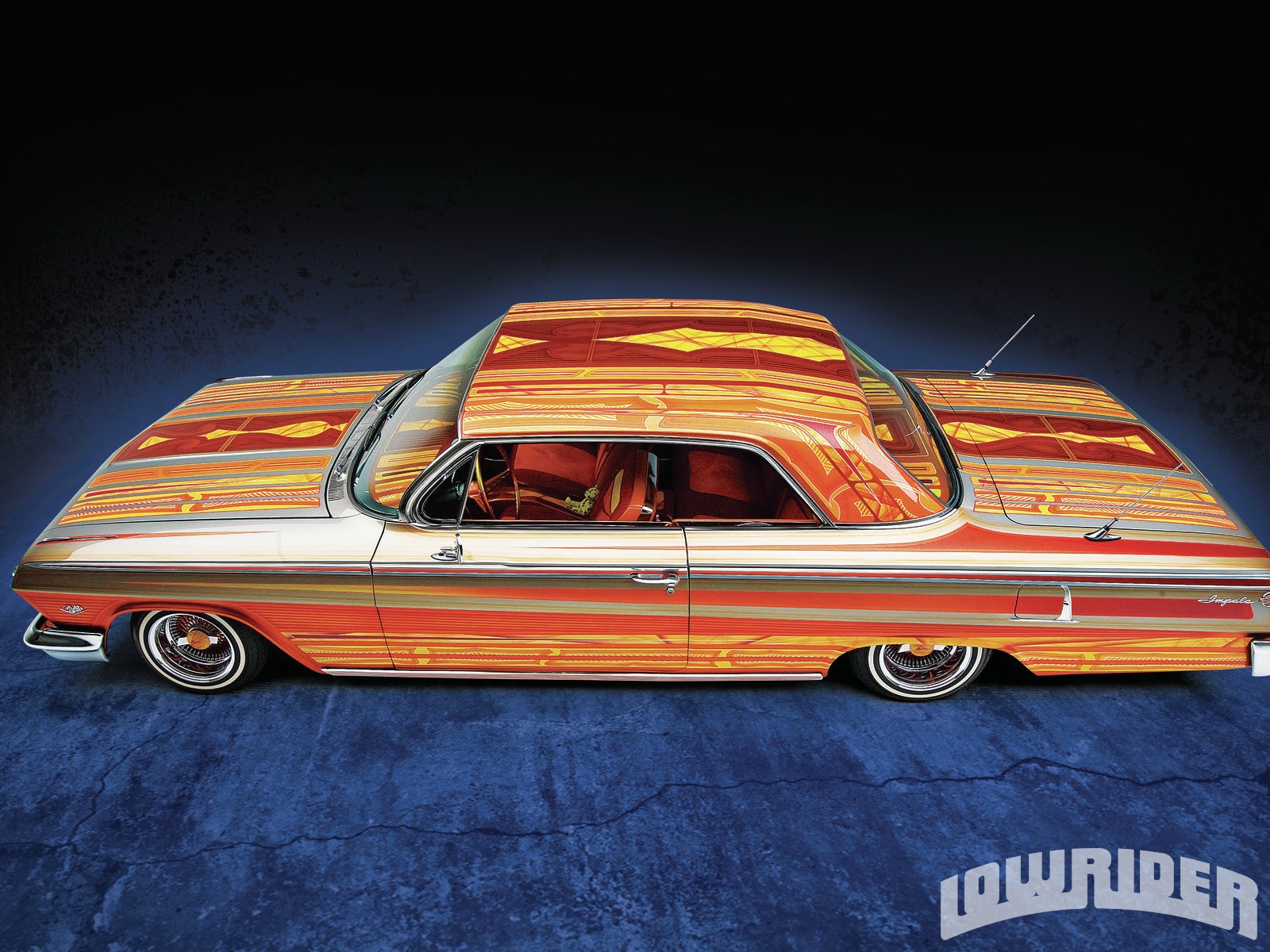 Adrian Escalante grew up in the neighborhood of Paradise Hills in San Diego, CA. While growing up, he preferred to hang out with his older brother, rather than to play with the kids his own age. Naturally, it was spending time with his older sibling that granted Adrian a passageway into the Lowrider culture. While on his block, he remembers seeing one of his brothers’ friends, El Chivo, cruising down the street in a black, ’85 Regal, blasting Santana from the G-Body’s speakers. Adrian remembers the exact words that came out of his mouth; “That’s a bad ass ride!” He was in shock, staring at the shiny black paint while the Lowrider slowly passed in front of him, scraping the ground. At that moment, his love for Lowriders began, and this love affair would surely grow over time. Even though his brother was five years older, Adrian never hesitated to hang out with his brother, and his brother’s friend, Shorty. “They were always up to something, so I enjoyed tagging along when they would go cruising Highland Avenue and talk to the girls,” Adrian says with a smile. During those cruising nights, Adrian laid eyes on a pink and purple, flaked-out mini truck―complete with graphics―which drew him even closer to the Lowrider game.

Soon enough, Adrian purchased his first car, an ’87 Monte Carlo, which he had painted black and upholstered with a light tan interior. He also juiced up the car with a two-pump setup with six batteries. After cruising his car for over ten years, he lost touch with one of his cousins who was deep into the Lowrider game. This also distanced Adrian from the culture, as his cousin was his riding partner. It was not until 2005, that he reconnected with him at a Goodtimes Car Club Show in Highland Park. Much time had passed, and he was a bit cautious in approaching him, as he couldn’t recognize him with a bald head. Eventually, he figured out that it was indeed his long lost cousin. After hanging out with him a few times, he joined the Goodtimes Car Club family in 2008. He joined Goodtimes C.C., because he liked the way the club was run and saw that every member was treated equally and like family.

After spending some time with the Goodtimes Family, it was time to build another Lowrider, so Adrian purchased a ’62 Impala from one of his friends and immediately started working on it. The Impala was running, but in poor condition, with missing nuts and bolts, and the engine was so flooded with oil that it blew the main seal while he was driving it home! He knew that he needed to rebuild the transmission and engine, so he delivered it to Tony Torres at Southlands Transmissions. Tony took on the task of ripping out the powerglide transmission to rebuild it. With a newly rebuilt transmission, Adrian had Tony replace the stock engine with a 350, and he was able to drive the car home a few weeks later with no problems.

The Impala sat for a while, until Adrian started to tinker with it. After taking all of the chrome parts and moldings to get polished and chromed, Adrian and his friend, Sal Manzanado, started the restoration by taking the body off the frame. The ’62 was completely straightened, blocked, and primered in Adrian’s back yard. The car has never been in a paint booth, so it was the careful planning and timing that Sal had to figure out while he laid down the champagne base coat on the Impala. After applying the base coat, Sal then started to add custom candy yellow, red, and orange, with a mixture of pearls and flake. He also added some graphics to the car. After the Impala was painted, it was time to redo the upholstery, so the interior was taken down south to Tijuana to Albert and Luis at Tapiceria Vasquez, where they custom-built a center console and reupholstered it with a multicolored mix of suede and ostrich skin to match the exterior. The car was then put together, and after a year of driving it and representing at car shows, Adrian knew something was missing.

After careful consideration, he decided to take the entire car apart once again, and this time, he prepared the frame and painted it as well. Adrian and Sal worked for two weeks straight, and they molded the hood, trunk, firewall, and dash. As if that was not enough, they decided to mold the headliner; a difficult task considering that they had to do everything upside down! They also hooked up the trunk of the car by building custom molded woofer and wheel housings too. At the close of the two-week build, Sal got back to painting custom graphics under the hood, which flow into the front dash and travel to the headliner, reverting into the back dash and then into the trunk and trunk lid.

The “Magnificent ‘62” was refinished in time for the LRM Vegas Super Show in 2010, where it got the attention of many car builders, even though it was built in Adrian’s back yard! While proud of his work, Adrian cannot expresses enough the fact, that if not for his wife Raquel, two daughters Amor and Gloria, his son Adrian, God, and especially Sal Manzanado and the Goodtimes Car Club Family, he would have never been able to build this amazing and “Magnificent ’62.”

Engine/Drivetrain: Powerglide with a custom built 350 with plenty of show and shine. Chrome flex hoses, hard lines, Edelbrock dress up kit and valve covers, with a polished carburetor and Intake manifold along with a custom painted air filter. The fan cover and wheel wells were also custom painted with graphics to match the exterior.

Body/Paint: Molded hood, trunk, headliner, firewall, and dash. The car was painted with Candys, flakes, and pearls, with graphics running throughout the entire car.

Interior: Custom-made center console painted to match the car. Dakota Digital Dash reupholstered with multicolor suede and ostrich skin. The paint graphics run through the car from the dash to the headliner, then down the rear package tray.

Setup: The airbag set up was already on the Impala when it was purchased. It was then taken off and replaced by Chalo Mercado at Street Fame in San Diego, CA. Four switches control the Impala’s movements.