Newsletter
Sign Up today for our FREE Newsletter and get the latest articles and news delivered right to your inbox.
Home » 1962 Chevrolet Impala Convertible – Perro ‘62 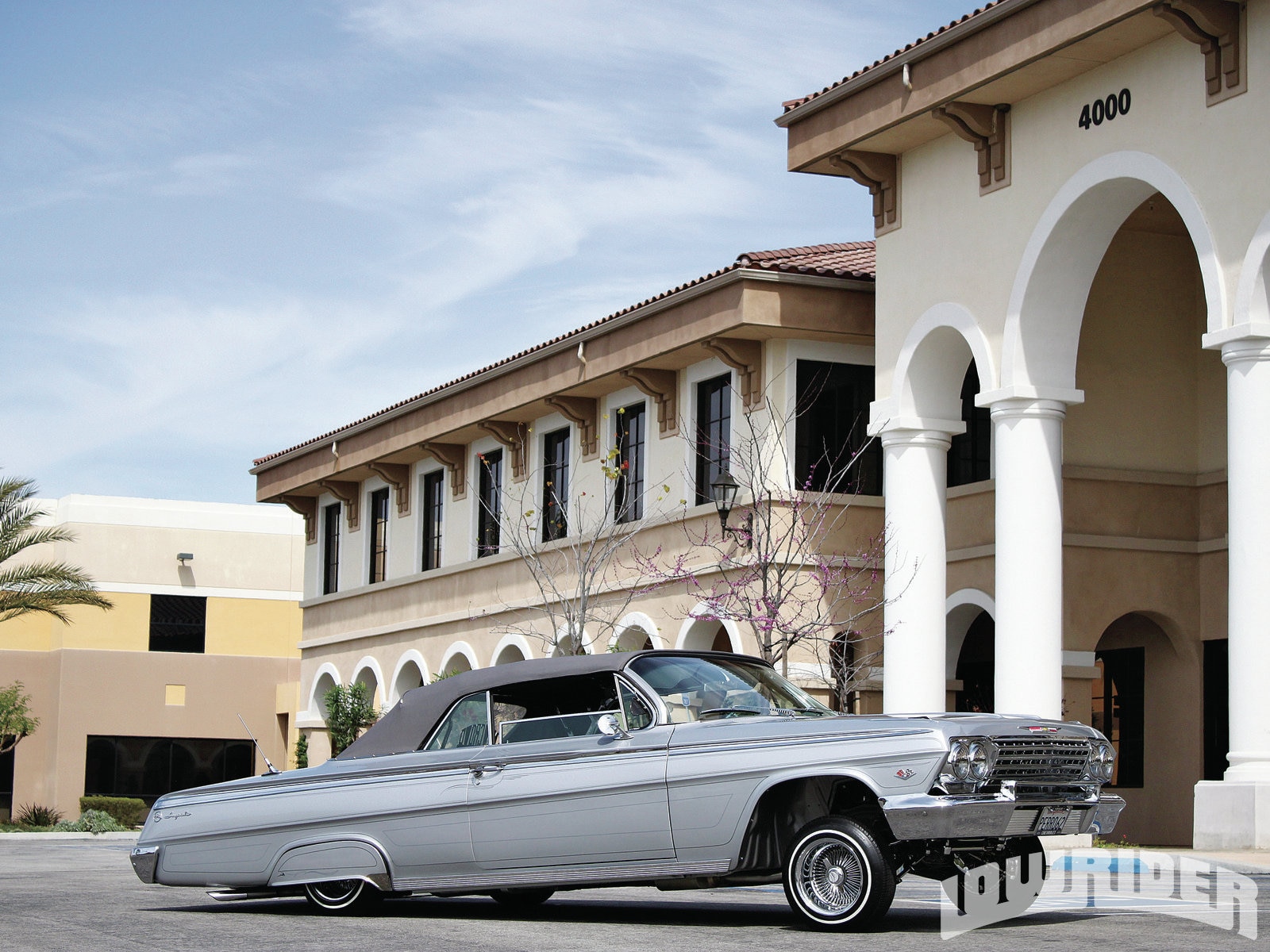 When Pepe Macedo of Santa Maria, California was younger, he was so crazy about Lowriders, he took on two jobs just to pay for the custom paint, hydraulics, rims and other accessories on his S-10 Blazer. Despite his work ethic, his parents stayed on him about pursuing a higher education and continuing on to college so that he could really get everything he would want in life. Deep down, Pepe knew his parents were right and he decided to take their advice and make the sacrifice by selling his ride and going on to college to study law. When he finally finished in the year 2000, he went on to become a probation officer, bought a house, started a family, and came across the ultimate project: a 1962 Impala convertible, which later became known as “Perro ’62.”

Longtime friend and fellow New Crowd Car Club member, Mario Martinez, sold the Impala project to Pepe. The car was completely disassembled and had a long way to go to be considered a street worthy Lowrider. Pepe put in his utmost patience into this project, taking his time with the build in order to make sure everything was done right. The project proved to be very difficult and Pepe’s drive for perfection was tested many times over. In repeated instances, parts were not polished or chrome-plated correctly, or a part was painted and left below 100 percent. Pepe always sent the parts back and had them redone, and if that wasn’t possible, he would trash the part and start over again. On top of that, the project was put on the back burner many times when priorities with his wife and kids came first.

About three years ago, the car was finally at a point where Pepe felt “Perro ‘62” was complete. He thanks everyone who helped with the project, especially his friends Clifford Cordero and Mario Martinez, and the shops Atlas Custom Sounds, and Joey’s Custom Tire & Wheels. Of course, he also gives a big thanks to his wife, Jenette, for all her loving support.

Engine: The 1976 Chevy 350-c.i.d. V8 features an Edelbrock intake and carburetor and was built up by Pepe’s father-in-law, John Doughty, and friend, Jose Meraz.

Body/Paint: Peter Cobarrubias of Santa Maria took on the body preparations and paintwork, ultimately spraying a silver sheen PPG finish. Nacho Zepeda, also of Santa Maria, painted the belly of the body. Mike Lamberson of Draggin’ Lines in Ontario, California added the final touches of his signature pinstripping, while other pinstripe accents were added by Tim Broberg at Fast Stripe in Santa Maria. Fonzy of Air Shot Tattoos in Los Angeles, California did all the murals. Buena Park Plating in Buena Park, California provided all chrome plating.

Interior: Bowtie Connection in Los Angeles fulfilled Pepe’s upholstery requests including wrapping the stock seat patterns in a grey color scheme. ’61 Impala inserts and the Chevy flag logos were embroidered into the interior, too. They rounded out the interior by doing the rag top and chrome rack.

Setup: Chris and Joey Duncan of Joey’s Custom Wheel &amp; Tire in Santa Maria installed an amazing hydraulic setup consisting of a whammy pump (with Marzochi gears and Adex dumps) and custom-bent hardlines. 8-inch cylinders run up front and 12-inch cylinders run in the back. Eight Platinum Die-Hard deep cycle batteries power the setup and four switches control it. Joey, Chris and Jeremy Cruz did all the chassis reinforcements on the X-frame.