Newsletter
Sign Up today for our FREE Newsletter and get the latest articles and news delivered right to your inbox.
Home » Round Brown – From Roswell: 1951 Chevrolet Deluxe Truck 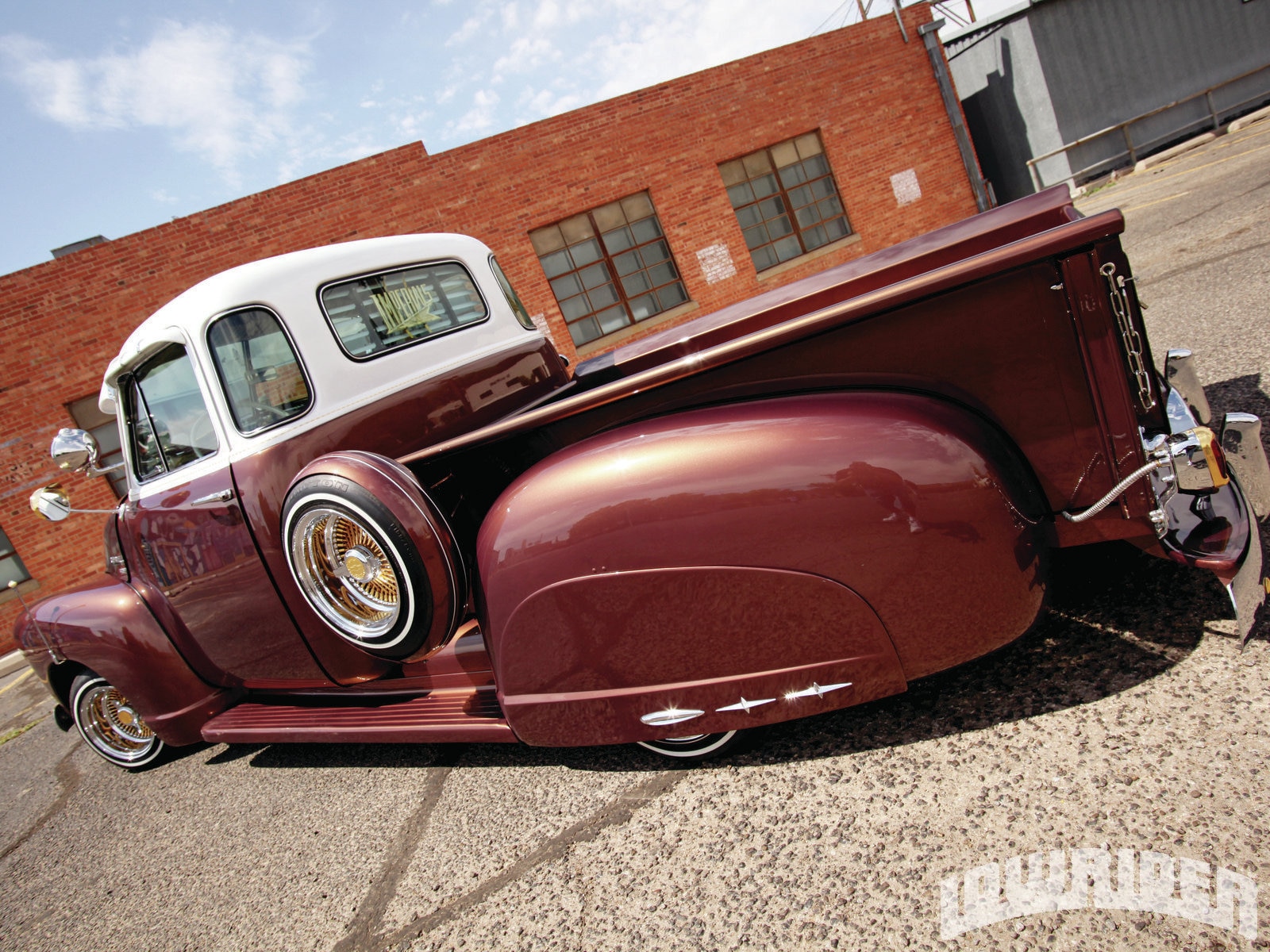 Midway between Albuquerque, NM., and Lubbock, TX., sits the small, yet infamous, town of Roswell, NM. In past decades, the town is best known for its debatable “government space experiments,” and has built a reputation as the “UFO capital of the world.” Despite the way Roswell is viewed, one local citizen, Orlando Vargas, wants to change the world’s focus from what’s hovering in this southwest community’s skies to what’s cruising on its streets ― its sleek Lowriders.

Growing up in this town, Orlando couldn’t wait for the next sighting; that is the next issue of LRM hitting the local neighborhood store. As a pre-teen, he would build his bikes like those in the Lowrider publication, and even at that age, he always had the passion for the Bomb features. In high school, young Vargas was cruising his first Low, a ’72 Impala. While the ride was nice, he was unsatisfied, as he still craved for the wide steel curves of his childhood passion; “Bombs”. In his senior year of high school, the thirst would be quenched, as Orlando found this 1951 Chevrolet truck. “I bought it for $300. Back then, that was a lot of money for a high school kid, so the owner let me have it in payments of $20.00 a week. I still have the handwritten receipts,” laughingly states this classic truck owner. For the next few years, the five-window Deluxe was a staple in the local cruising scene. However, in his mid-twenties, Mr. Vargas had to park his ride for a “minute,” as he had started a family. Needless to say, that “minute” became a decade. During those years, this family man never stopped looking through the LRM pages and envisioning his customizing ideas, which he kept to himself, yearning for yet another day as a builder.

Finally, in his mid- thirties, Orlando decided that “only as a hobby” (as he described the project to his wife), would he spend some time in getting the truck back to cruising condition once again. This hobby gradually became a five-year all-out build. “I would buy parts and send parts to be chromed, not realizing that when it was time to put it together, this was no longer just a cruiser.” This solo build was coming out so well, that it grabbed the attention of Cruz Rodriguez of the local chapter of Imperials Car Club. With a little persuasion, Orlando soon displayed the legendary club plaque on his newly completed, “Round Brown.” “Joining the Imperials was a great high point in the build,” Orlando says with pride.

Since its completion five years ago, this pearlescent brown beauty has placed throughout the tandem state show circuit, and pleased many boulevard onlooker as well. Look for the next sighting of this Roswell spacecraft at the Phoenix and Las Vegas LRM Super Shows in the near future. Orlando wants to thank his family; Miguel, Andres, Leticia, and his wife Sonia, for their patience and support. Paz, Tejas

Body/Paint: The owner shaved the firewall and repositioned the spare tire carrier to install a full rear fender. He refinished the upper tone with a Chroma Base White Diamond Pearl and the lower tone with a pearlescent Autumnwood Mist. Chrome with gold plating by El Paso Plating.