Newsletter
Sign Up today for our FREE Newsletter and get the latest articles and news delivered right to your inbox.
Home » 1964 Chevrolet Impala – Sinful Sin 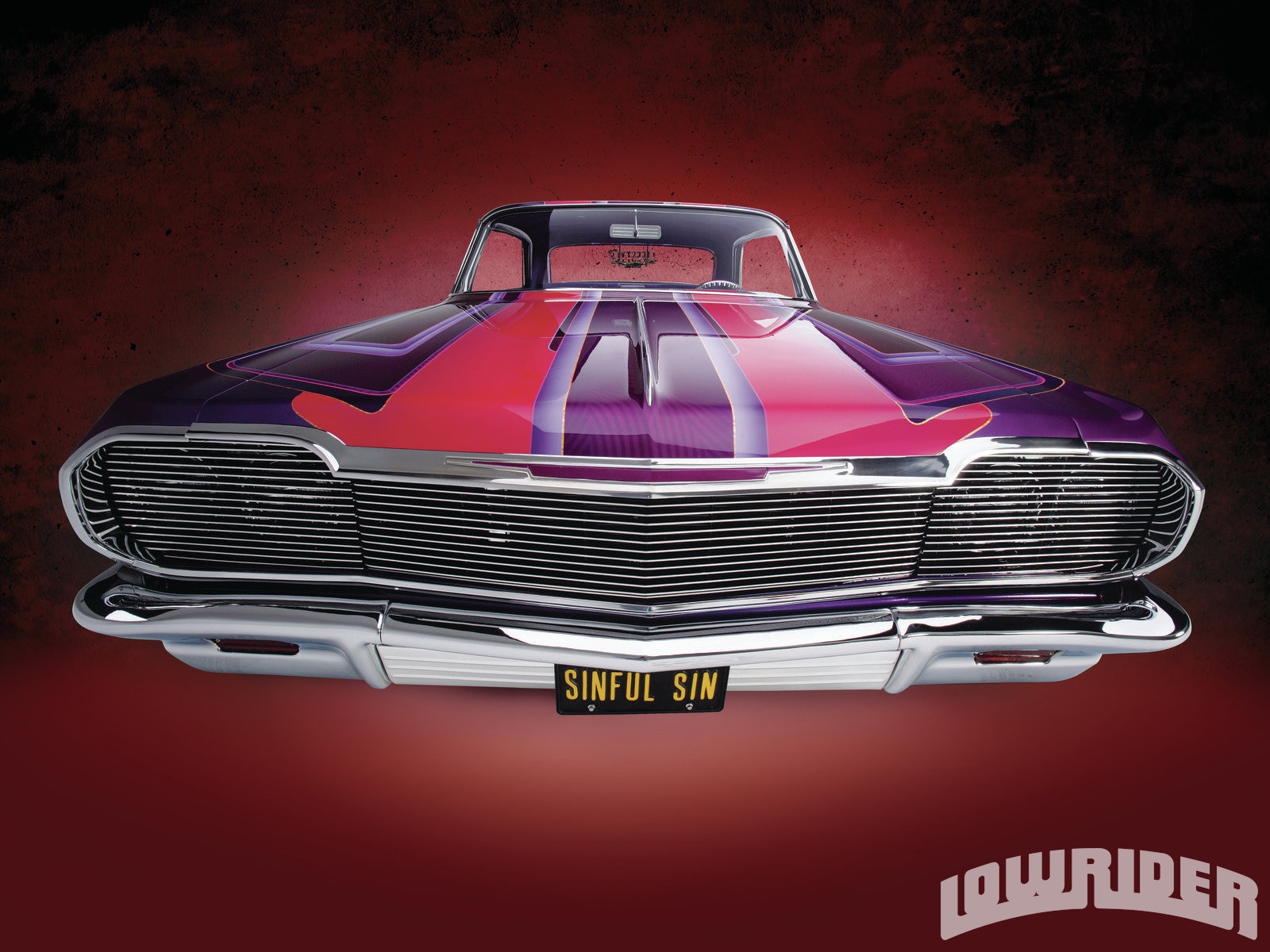 Luis Lemus of Baldwin Park, CA., has certainly had his goals in life. In the automotive realm, he always wanted to be part of a car club that demanded the most out of him; an objective he realized upon joining the veteran Lifestyle Car Club. This was no easy task, and proved to be very challenging to him as he struggled to balance the demands of the club’s requirements and his own personal responsibilities. His allegiance to the car club and his loyalty to his own family proved to be vital components to the success of this build you see before you today; a powerful and beautiful 1964 Chevy Impala.

The paintjob on a Lowrider gives it the individuality it needs to stand out from the rest and create its own identity. Naturally, Luis’ paint decision was one that he did not take lightly, and he put all his faith in Danny D. of Baldwin Park, who laid out a unique paint job that flowed throughout the car. The graphics ran through the dash, package tray, and even the door jams. The paint job went a step further by dripping through the wheel wells and onto the frame, where it turned into collaboration between Walt Prey and Danny D. At the end of the day, this paint job had been impressive enough to win an award at the Pomona Grand National Roadster Show for “Best Use of Paint.”

Luis, who is a self-taught mechanic, was able to take his 1987 small block engine and send it to the chrome shop, where the whole block was taken apart, polished and dipped in a show-chrome finish. Once it was time to assemble the engine, it was hooked up with all the goodies; from the Billet Specialties serpentine kit to the Edelbrock chrome intake carb combination. In order to keep the engine from turning blue, it was cooled through a BeCool radiator and allowed to breathe using a Flowmaster exhaust kit. Several tricks in the engine compartment included custom stainless steel tubing, done by Wild Child Customs, Undercover Innovations panels that covered the core, and the custom EMS Billet hinges that tied the modern engine compartment together.

The frame was completely molded by Luis and his House of Pain shop, which took credit for assembling the custom painted chassis. The frame featured a chrome undercarriage that stopped with the power of the SSBC master cylinder and booster combination. The gas tank was relocated, as it was removed from under the car and replaced with the custom CCE hydraulic whammy style set up. The trunk compartment was molded up with panels that hid the four batteries which powered the hydraulic system. The panels also hid the gas fuel cell that feeds the chromed-out engine.

The exterior of the car also boasted several unique tricks, from the custom badges to the phantom billet grill from AIM Industries. The billet grill gave the car a unique look, and was yet another reason that this Impala stood out from the rest. Luis wishes to thank his girlfriend Cindy and the crew of Lifestyle Car Club members who pulled together at crunch time to make sure that the car was finished in time for the Vegas Super Show last October. Those assisting members specifically included Frank, Gilbert, Saul, Louie CB, Johnny, Luis’ son Junior, Carlos and the rest of the guys that were there during those long nights. n

Interior: Purple leather custom interior with a painted dash to accent the interior.