Newsletter
Sign Up today for our FREE Newsletter and get the latest articles and news delivered right to your inbox.
Home » 1990 Lincoln Town Car – Bumps And Dumps 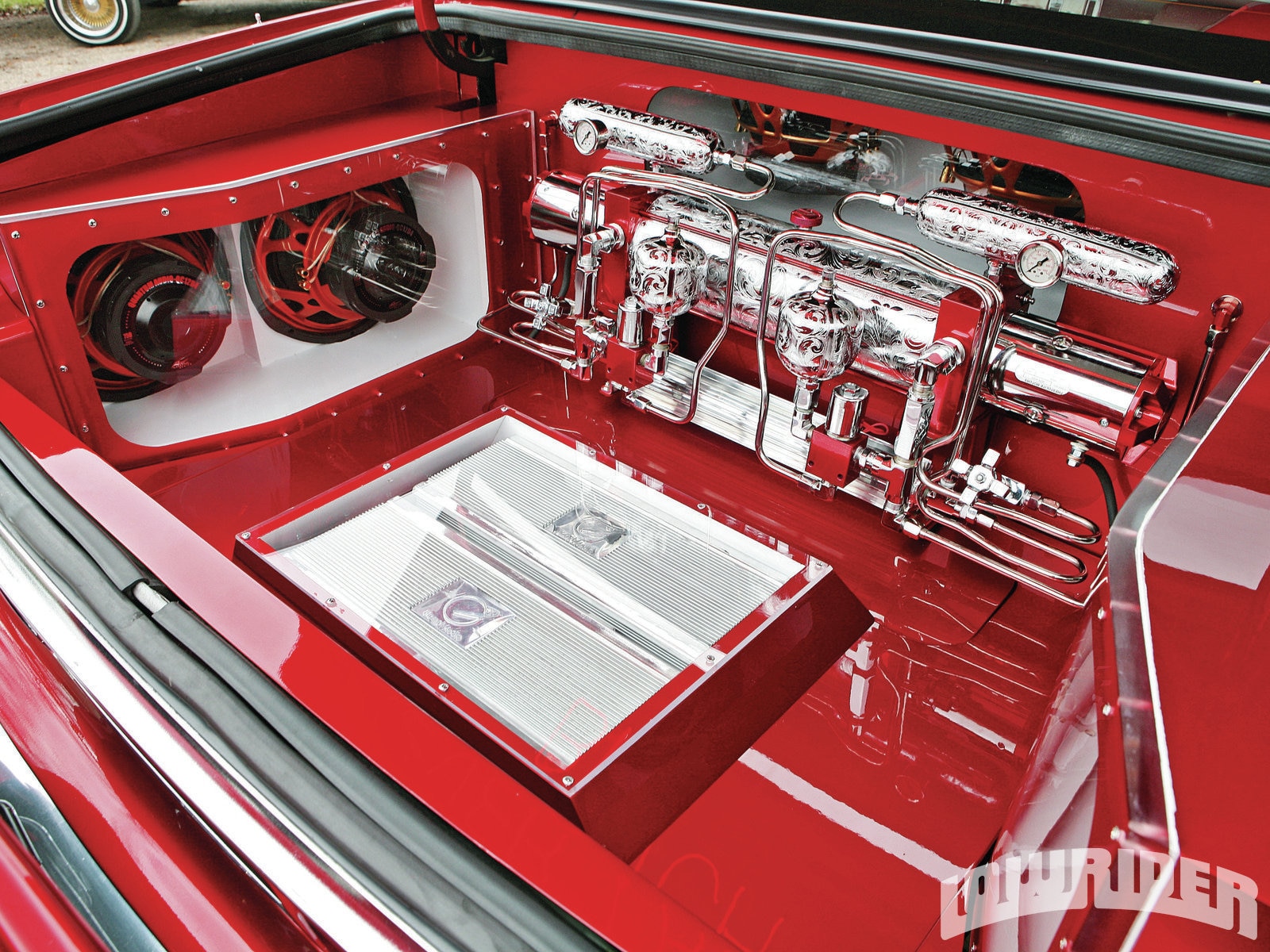 In this month’s Bumps and Dumps, we take a look at the trunk of Houston, TX., resident Omar Rodriguez from Latin Fantasy Car Club. Omar is a Technician at Mitsubishi, and is also a big shoe collector. His passion for Lowriders began some years ago, when he set his sights on building a clean car to cruise around in Houston . Inspired by the big bodies that he saw riding around town, Omar purchased a 1990 Lincoln, Town Car. Now it was time to put his vision to work and Omar got started soon after making his purchase.

After having the car painted Candy Red and having his upholstery and engine redone, he wanted to get a one-of-a-kind hydraulic setup. After doing his research, he took his Lincoln to Shorty’s Hydraulics, where he sat down with Shorty and John to discuss some ideas for the setup. Omar let John create the one-of-a-kind Shorty’s Hydraulic three pump whammy Setup. The setup also includes 20 feet of custom bend hard lines, four dumps, nine solenoids, and Shorty’s heavy hitters blocks, with eight-inch cylinders in the front and ten-inch in the rear, all powered by four Optima marine batteries. After the setup was assembled, it was shipped off to get engraved by Daniel Castaneda from Dallas, TX. While the setup was in Dallas, Shorty and his crew started working on the sound system by building custom woofers and amp boxes, ensuring that everything in the trunk was nicely housed. After the trunk

it was sent off to be custom painted to match the exterior. The sound system setup includes a JVC head unit, Planet Audio amps, six 12-inch Quantum Audio woofers, Pioneer 6x9s, and five 5- inch screens. After the entire setup and sound system was put together, the few weeks of construction proved to be worth it. With a little design, some elbow grease, and around $6,000, Omar now has one of the cleanest Trunks in Texas, thanks to the team at Shorty’s Hydraulics in Houston, TX.

Rides 1985 Cadillac Fleetwood Brougham – How You Like Me Now?

Wife, mother, homemaker… CAR builder? While those words rarely go together, for Josefina Cornejo, they are a way of life.