Newsletter
Sign Up today for our FREE Newsletter and get the latest articles and news delivered right to your inbox.
Home » 1971 Chevy Monte Carlo – Berry Low Merlot 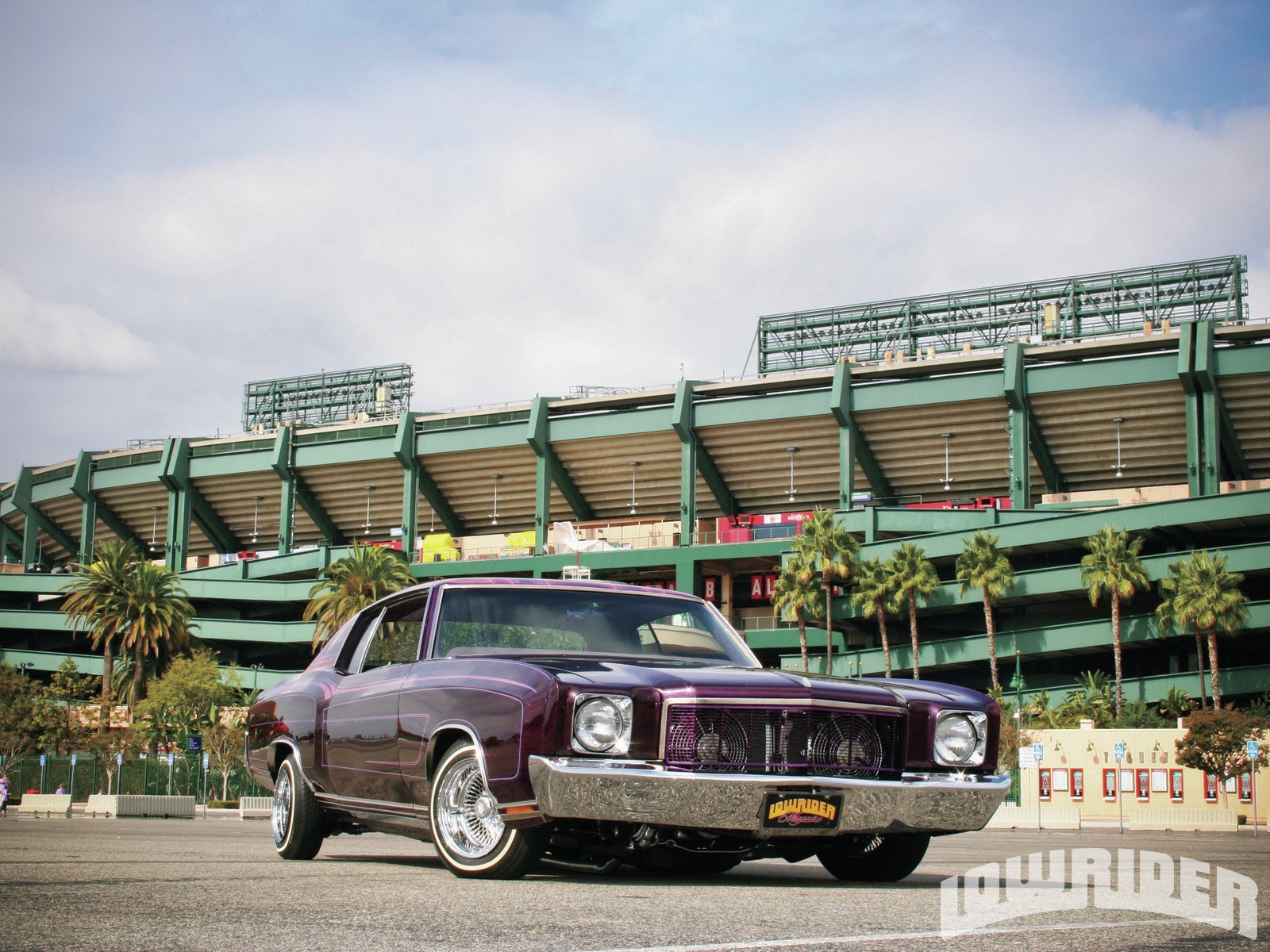 Jose Carranza of Mesa, Arizona, has been Lowriding for quite some time. He credits his brother, Ardy, for introducing him to this lifestyle back in the early 90s. In fact, Ardy even introduced Jose to the Uniques Car Club in 1993, a club in which he is a still a proud member of to this day. Although Jose has had his share of nice rides, it was this ’71 Chevy Monte Carlo, known as the Berry Low Merlot, that really had people’s heads turning!

In 2001, Jose bought the car from his cousin, Tony. Not wasting any time, Jose had the ride painted and reupholstered the interior in the following year. Unfortunately, in 2003, things had to be put on hold when Jose’s labor union went on strike, leaving him as one of 2,500 employees out of work. Jose, looking to still save money and provide for his dependants, decided to move his family out to Arizona. Since his previous income was tied up in buying a new house and providing day-to-day necessities, the Monte had to be put on hold indefinitely. For the next three years, the car sat, waiting for the rest of its upgrades.

New to Arizona, and 400 miles away from his contacts in the custom car scene, Jose had to get creative in fixing up his ride, if he was going to do it at all. Thanks to the Internet and websites like YouTube, Jose was able to learn how to do many customizations on his own. Jose built his own pump rack, installed his hydraulic pump behind the radiator, and even did his own “hardlining” of the hydraulics to the cylinders. Jose also installed the entertainment setup, adding all of the audio and video components.

Many Lowriders may take their car from shop to shop to customize their ride, but Jose is proud to have done a lot of the work all by himself. He thanks his family, especially his 10-year-old son, Devin, for their physical help and mental and emotional support throughout the buildup of this mean Monte Carlo. He also thanks the club’s president, Nesario, and friends like Louis, Tom, and Joe. Last, but definitely not least, Jose sends a big thanks up above to his brother Ardy, may he rest in peace. The Monte Carlo is not finished yet, Jose says, citing his plans to add more graphics and patterns, as well as a lot more chrome for the undercarriage.

Engine: Jose took things into his own hands (with the occasional help from his son) to buildup and installed the 86 Chevy 305-c.i.d. V-8 engine. Under the hood is a plethora of chrome, painted or polished parts and accessories. A 350 transmission provides smooth shifting.

Body/Paint: Tony of Tony’s Customs in Santa Ana, California, took on the bodywork and paintjob. First, the body was prepped and the door handles, mirrors, and emblems were shaved. The inner sides of the trunk and hood were molded and smoothed out. Tony sprayed a candy purple with multi-colored patterns on the body’s exterior and the frame. The famous Mike Lamberson did what he does best, adding the finishing touches of pinstripping.

Interior: John Kennedy of Bowtie Classics in San Pedro, California, took care of the interior needs. Acura front seats and a custom split rear seat were wrapped in tweed and vinyl. A custom-made center console and custom designs in the door panels and headliner add to the car’s uniqueness.

Sound System: Jose installed a Kenwood Excelon head unit along with a chrome Audiobahn amplifier. Four chrome tweeters, four 6×9-inch mid-range speakers, 5-inch screens on the seats, and a 7-inch monitor in the center console round out the entertainment system.

Setup: Jose decided to go with an old-school style, personally installing a whammy hydraulic pump in the front of the engine bay and a set of 8-inch cylinders at all four corners. Two batteries power the up and down movement, controlled by two switches.