Newsletter
Sign Up today for our FREE Newsletter and get the latest articles and news delivered right to your inbox.
Home » 1951 Chevrolet Truck – Aztlan 51 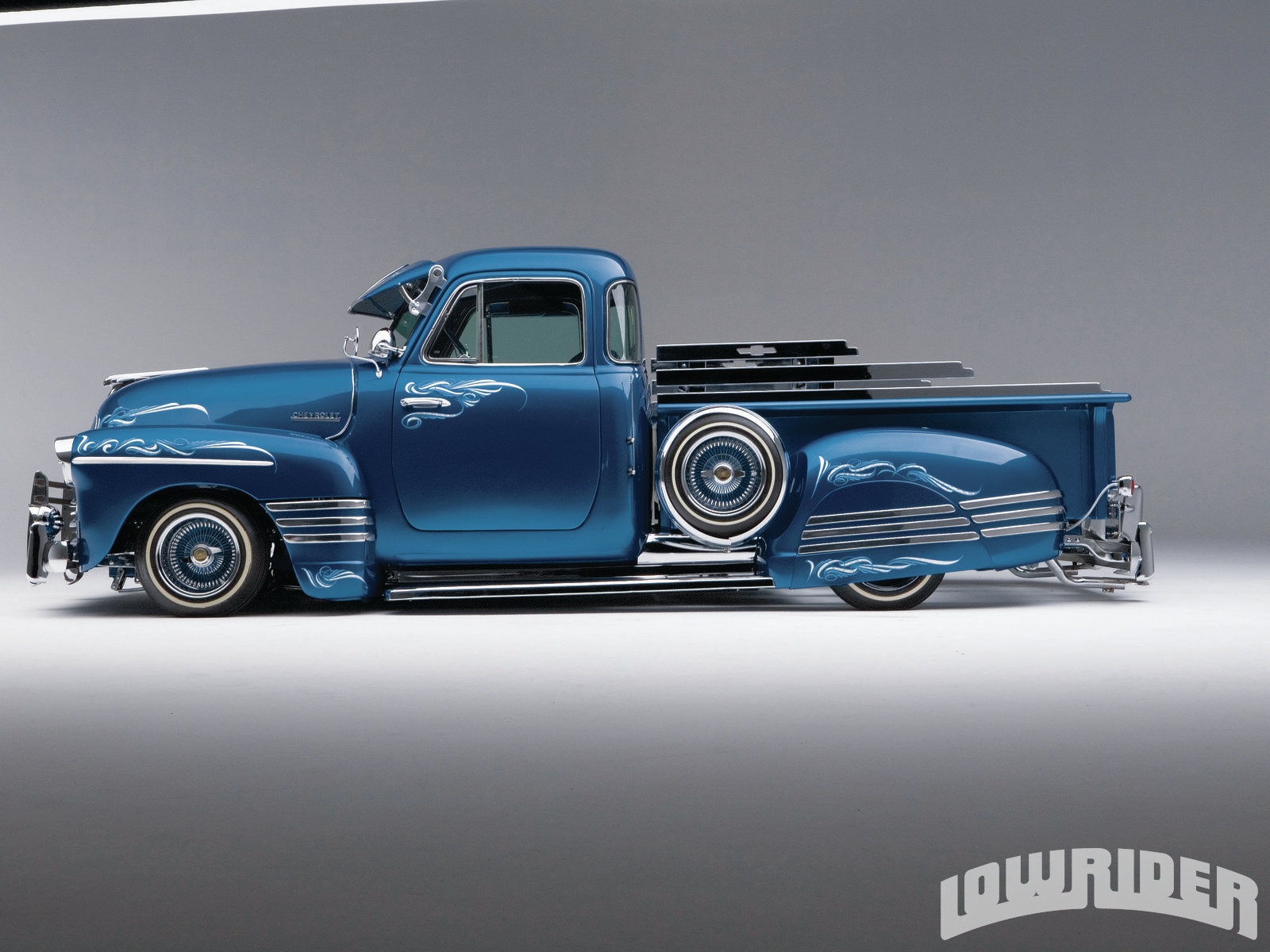 Guicho Valenciano was born into a humble working-class lifestyle in Mexicali, Mexico. His mom was a homemaker while his father worked tirelessly, delivering 5-gallon jugs of water on a makeshift car frame that was pulled by a horse. At the age of 14, when Guicho was old enough to pick up the 5-gallon jugs of water, he began working alongside his dad. When Guicho was not working with his pops, he would spend his free time doing what he loved best; drawing. Guicho did not know that his creative side would eventually play an important part in his adult life. Even at a young age, he maximized this hobby, peddling his drawing abilities to his schoolmates by trading his artwork for tortas, chips, or candy. At the age of 16, Guicho began tattooing some of his friends during his free time while he was working with his dad in the fields across the border in Calexico, California. Guicho’s passion for Lowriding developed after he moved to the city of Compton, California, where he worked as a construction worker. Money was tight as it was hard to get a good paying job, so Guicho decided to move back to Mexicali with his fianc, where they got married a short time after.

Guicho purchased his 51 Chevy truck in 1983 with some help from his father-in-law. The truck was purchased for $3,700 pesos, equivalent to $320 U.S. dollars. After purchasing the truck, he still remembers laughing with his wife because the truck would smoke so much while he drove it in the streets of Mexicali. The truck was originally a flatbed which had been purchased to start Guicho’s new career as a welder. Unfortunately, his welding career was cut short after he fell into hard times, and he decided to get back to what he loved doing full time; tattoos. Guicho’s passion for art was the reason he was able to get back on his feet, and it also served as the financial means for him to go all out on his project truck.

After saving a bunch of cash, the first thing that Guicho did was purchase a bed for the truck so he could customize it. The truck was driven to Venturas Shop in Mexicali, where they started by tilting the front end, adding suicide doors and customizing the tailgate. The tailgate was welded shut and the Bow Tie Logo was cut into it, before it was finished off and molded into a smooth finish. The truck’s engine and interior were then removed, while the body was delivered to El Poli at El Poli’s Candy Shop in Mexicali. El Poli started by sandblasting the entire body to see what needed to be fixed or replaced before it was primered and painted.

Once the exterior was in good hands, Guicho took it upon himself to replace the original engine with a 90 350 Caprice engine that was rebuilt in Guicho’s back yard. He dressed up the engine with a four barrel chrome Holley carburetor, chrome headers, and Bow Tie gasket covers with a chrome dress up kit. The engine also has a chrome water pump, alternator, and chrome pulleys.

Next on the list was to prep the bed for the hydraulic set up. The body and frame were reassembled, so the guys at Catrine’s Hydraulics in Mexicali could start putting the setup together. They started by cutting the bottom part of the bed, in order to help them go all out on the custom bend tubing and floating pump rack. The setup includes over 40 feet of tubing, four Red’s pumps, four dumps, and four blocks, all powered by six Interstate batteries.

After the guys had the setup done, all of the elements of the truck were taken back to El Poli, where they modified the frame so they could mount the engine. During this process, Guicho reinforced the frame to withstand the abuse of the hydraulic setup. After that, he decided on a paint scheme and told El Poli to paint the truck candy blue. When the truck was painted, the engine and setup were put back together. With the truck almost finished, Guicho towed the nearly complete truck to Ontario, California, so master pinstripper Mike Lamberson could add the final touches with his expert work. The truck was then taken back to Mexicali, so they could clear it to a glass finish.

In 2007, the truck was finally finished and Guicho started taking it out to different car shows to compete with the big boys. The truck wound up taking plenty of First Place trophies and has been competing ever since. Guicho gives credit to his wife, Olivia, his kids Omar, Leslie, Yissel, and Edgar, as well as his Aztlan Car Club brothers for being supportive and lending a helping hand because without them, the truck would never have made it to the level it’s at now.

Engine/ Drivetrain: Guicho replaced the stock engine with a custom-built ’90 Caprice engine that he rebuilt in his backyard.

Body and Paint: The Candy Blue paint was done by El Poli, while Mike Lamberson did the pinstriping. An Aztec-themed mural adorns the truck bed, courtesy of El Mois from Mexicali.

Interior: El Tizoc took his own idea and custom built the interior with custom swivel seats and center console. The Aztec pyramid theme can be seen all over the interior, which is color coordinated with Blue and Grey upholstery.

Setup: The Red’s hydraulic setup was done by Catrines Hydraulics. The setup has four Red’s Pumps; over 30 feet of custom bend tubing, and is powered by six Interstate Batteries.