Newsletter
Sign Up today for our FREE Newsletter and get the latest articles and news delivered right to your inbox.
Home » 1946 Chevrolet Aero Sedan Fleetline – Canyon City Cruiser 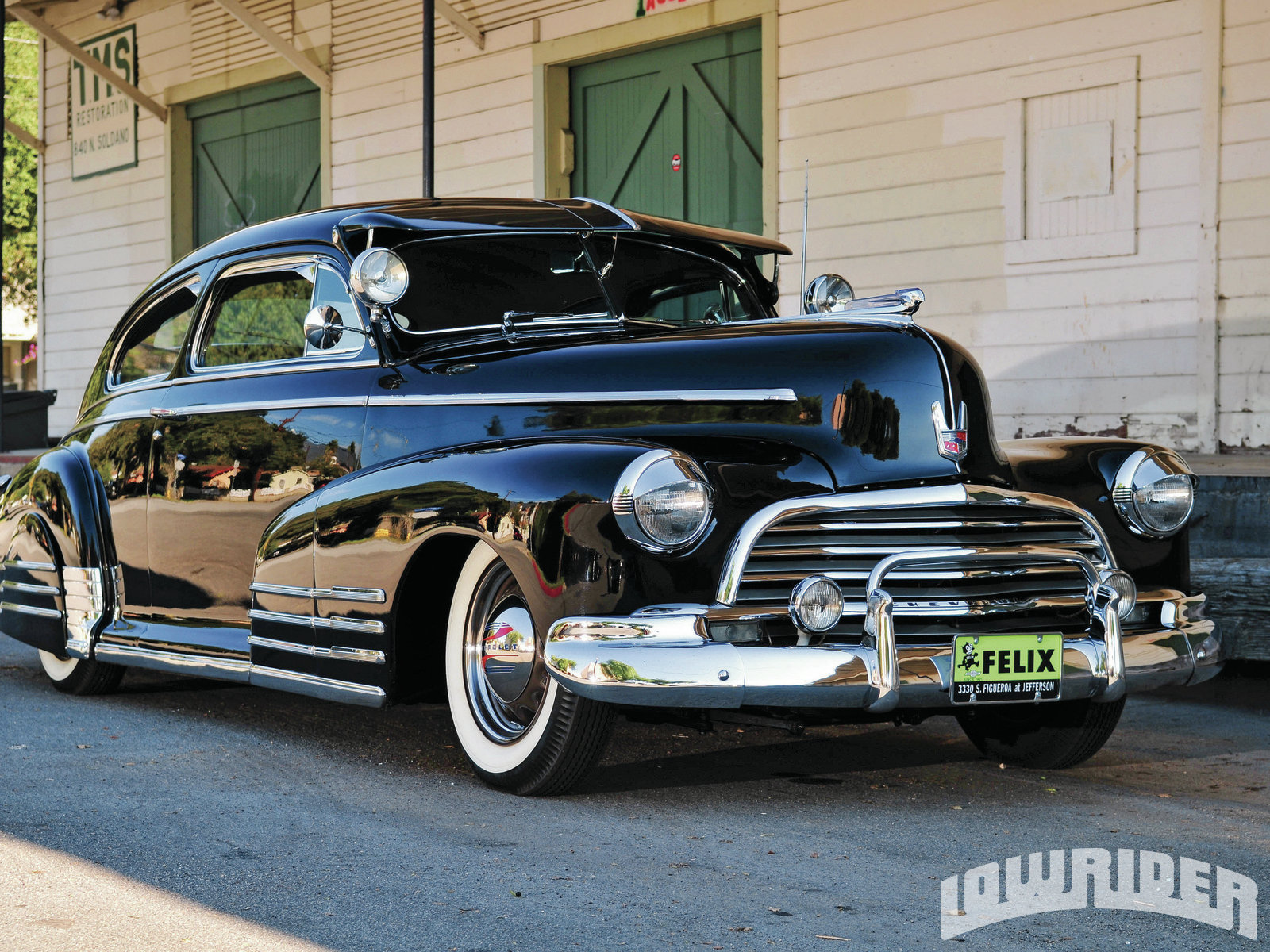 As a teenager, Paul Hertz worked during the summer at his father’s commercial trucking business. On occasion, some of the employees would work on their cars after business hours in the repair shop. Many of the cars were older Chevys that Paul took an immediate liking to. They were like the cars that Paul’s grandfather and father had been driving for the majority of his life, but they were a bit different; they were Lowriders. Paul was no stranger to custom cars. His dad had a souped up 57 Chevy and two 40 Ford Coupes in high school, so custom older American cars were nothing new to him, although seeing them in a Lowrider style was a new twist for the young enthusiast.

By the time Paul had reached high school, he was completely engulfed in the punk rock and skateboarding scenes. He was playing guitar in local garage bands with his friends and hitting the Badlands skate spots. Some of Paul’s friends restored 60s cars with their fathers and at that point, cars became more than just methods of transportation for him. He was drawn to the classic style, the simplicity, and how different they wereand you were if you were driving an older ride. You set yourself apart from the conformity of the masses, much like being part of the punk and skateboarding cultures.

Paul started to notice that the car cultures had their own underground and sub-cultures. He could see that it was another form of being creative and expressing your own style through the building and then the cruising of the car. It all made sense to him at that point, and it felt natural that everything he was into (punk rock, skateboarding, custom cars) was crossing over with each other.

Fast-forward twenty-plus years later, and everything in Paul’s life is coming together for him to be able to buy his own classic car. Family and work life had reached a certain level of stability, so Paul knew it was time to go shopping for his ride. After narrowing down his choices, Paul focused on finding an Impala or Chevy Bomb.

Paul found an original 60 Chevy Impala hardtop in Lubbock, Texas. Paul and his dad drove to Texas, picked up the car, and brought it home. The car had a short-lived stay, as after attending car shows and visiting the Pomona Swap Meet, Paul decided he wanted a convertible Impala. He sold the hardtop and started to build a 59 Impala convertible.

With the convertible in the shop getting a frame-off restoration, Paul continued to check out car shows when time permitted. His interest in the Bomb subculture began to heighten. Paul had also purchased a 51 five window Chevy Bomb truck, and his girlfriend Julie had just bought her own Chevy Bomb. In the fall of 2008, Paul and his dad were at the Pomona Swap Meet browsing through the cars for sale. One car in particular stood out, a clean 46 two-door Aero Sedan Fleetline. The 46 is one of the rarest years of Fleetline models due to the low production run and the first year of vehicle production for Chevrolet after World War II.

What made the car stand out even more was the jet black, wet-looking paint, lowered stance, and the fact that it had a whole lot of rare and original factory accessories. It was perfect and, more importantly, it was for sale! The crowd around the car began jotting down the contact information and taking photos of the black beauty. Later that night, Paul was looking at the photos wondering what it would be like to own such a beautiful Bomb. He started to pick up the phone to call the seller, but figured it was already sold.

A few weeks later, Paul was at a local car show in Azusa, California and guess what, so was the 46! Paul introduced himself to the owner and builder of the car, a gentleman by the name Tutu. Paul would soon learn that Tutu is one of the most respected OG Bomb builders in Southern California. After talking with Tutu about the car, Paul found that it was a full frame-off restoration. By the end of the conversation, Tutu gave Paul a price for the Fleetline. He went home that day and started to figure out how he could afford the purchase.

Within days, Paul made an appointment with Tutu to view the car at his garage. Although Tutu did not have a deposit taken on the car, Tutu told Paul he had another interested buyer for the Fleetline that wanted to freeway test it before buying it, and this was to happen within the next couple of days.

Tutu went over the details of the restoration with Paul, and explained that he had done the body and paint work on the Fleetline. He had Mike Perez take care of the interior and install a Hampton Coach Kit, while Sharab, in the San Fernando Valley, took care of the woodgrain restoration. Carter’s, in La Puente, California rebuilt the stock 216 engine and three-speed transmission. The exhaust is a split manifold with glass packs that expel the exhaust fumes in the familiar Chevy Bomb pipe rap.

Tutu also took care of the frame work and lowered the Fleetline just a bit to enhance the look of the 46. He finished off the chassis work with a set of 16-inch Artilleries, pinstriped by Danny D and mounted to Firestone wide white walls.

After hearing about all the restoration work Tutu had done to the Bomb, Paul was sold. The next morning Paul was at Tutu’s with a deposit, and the deal was complete a few days later. Paul now had another classic Chevrolet to call his own.

Since bringing the Fleetline home, Paul has attended local cruise nights and car shows in the San Gabriel Valley and brought home quite a few trophies. He just participated in the 2010 Azusa Gold Days Parade. As you can imagine, everywhere he goes the car attracts a lot of attention, and its very well deserved. Tutu clearly made the right decision in selling the rare Fleetline to Paul, as he is someone who appreciates the rarity and craftsmanship. We know once the 59 Impala is done it will be just as eye catching as this Canyon City Cruiser.

Interior: Mike Perez covered the interior in stock materials and a Hampton Coach Kit. Sharab out of the San Fernando Valley did the Woodgrain.

Suspension: Tutu lowered the Fleetline just enough to fill the gaps between the fenders and tires.