Newsletter
Sign Up today for our FREE Newsletter and get the latest articles and news delivered right to your inbox.
Home » 1984 Cadillac Fleetwood Brougham – Aqua Marine 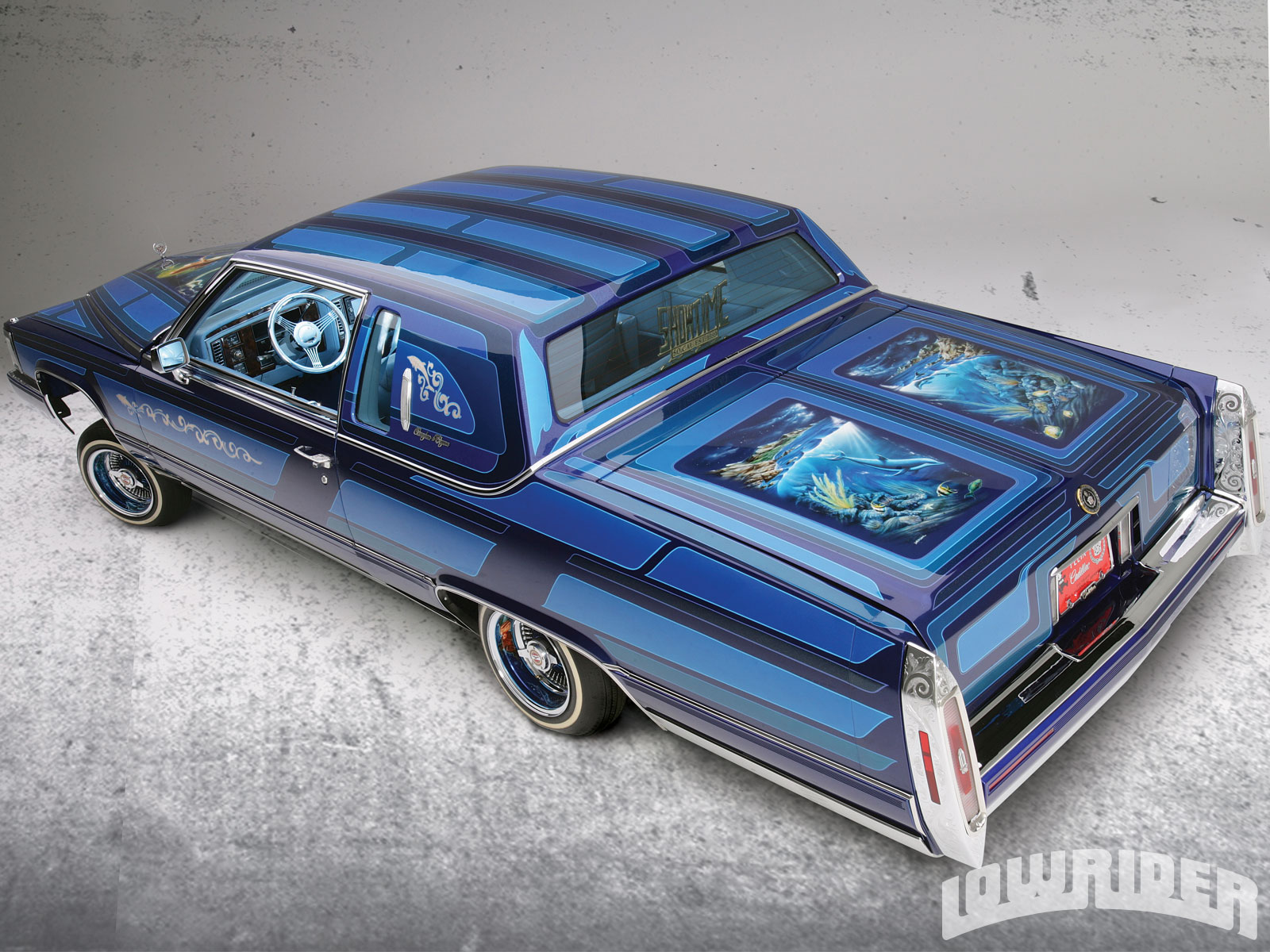 Alex Davalos of Lake Elsinore, California, is no stranger to the Lowrider scene. Through his work with his car club, Showtime, he has seen and done many great things in his Lowriding career. He flourished during the Japanese Lowrider boom in Southern California, making his mark and stabilizing his income in the process. A born Lowrider, Alex told us that he bought this Brougham when the overseas Cadillac market was at its peak; and somehow, this one survived the mass exodus. It ended up being a blessing in disguise, as Alex stored the car away, thus giving it a chance to become the immaculate Lowrider you see before you today.

Since the car was stored for even longer than the two years it took to put it together, the car was in excellent condition when Alex started on it. He was able to jump back into the project, and first on the agenda was to perform a euro conversion, which turned the ’84 luxury car into a ’90s two-door luxury cruiser. The paint job was a focal point, as the graphics and airbrushing Alex added to the car complemented the graphics that were already in place on the molded Brougham roof. The paint job was a collaborative effort between three artists: Genaro Gobian of Orange Coast in La Habra, who sprayed the body first; Dave Whistle of California Design of Norco, who added the pin stripping; and Jose “Dire” Mercado of Long Beach, who took an airbrushing influence from Alex’s family’s favorite Disney movie, “Aqua Marine.”

This Caddy’s classic 4100 was pulled out and replaced with a ’89 Camaro engine, which has an Edelbrock cam and carburetor sitting atop a Professional Products chrome intake. The candy painted engine also featured a chrome-plated serpentine system and classic Offenhauser fin valve covers, with a matching air cleaner. The rest of the engine compartment received a dose of chrome and candy cobalt blue, which matched the exterior of the car.

The hydraulics were taken care of by Alex’s club buddy, Rick Rock of Low Life Hydraulics, who worked his hydraulic knowledge, style, and design into the build to create a show-worthy setup. The three-pump setup allowed the car to lock up, in order to expose the under carriage’s deluxe chrome, paint, and murals. Rick also took credit for the tubing, which was tied into the hydraulic setup. The interior of the car was not too far behind, as the complete interior was re-stitched in blue synthetic leather.

After a two-year build, the Caddy was looking fresh off the assembly line and ready for its debut at our San Bernardino Lowrider show. The car featured original 5.20’s mounted on some G-Boys wire wheels. The full on display separated Alex from the competition, as this land boat was ready to sail; fully earning its nickname, “Aqua Marine.”