Newsletter
Sign Up today for our FREE Newsletter and get the latest articles and news delivered right to your inbox.
Home » 1962 Chevrolet Impala – Nemesis 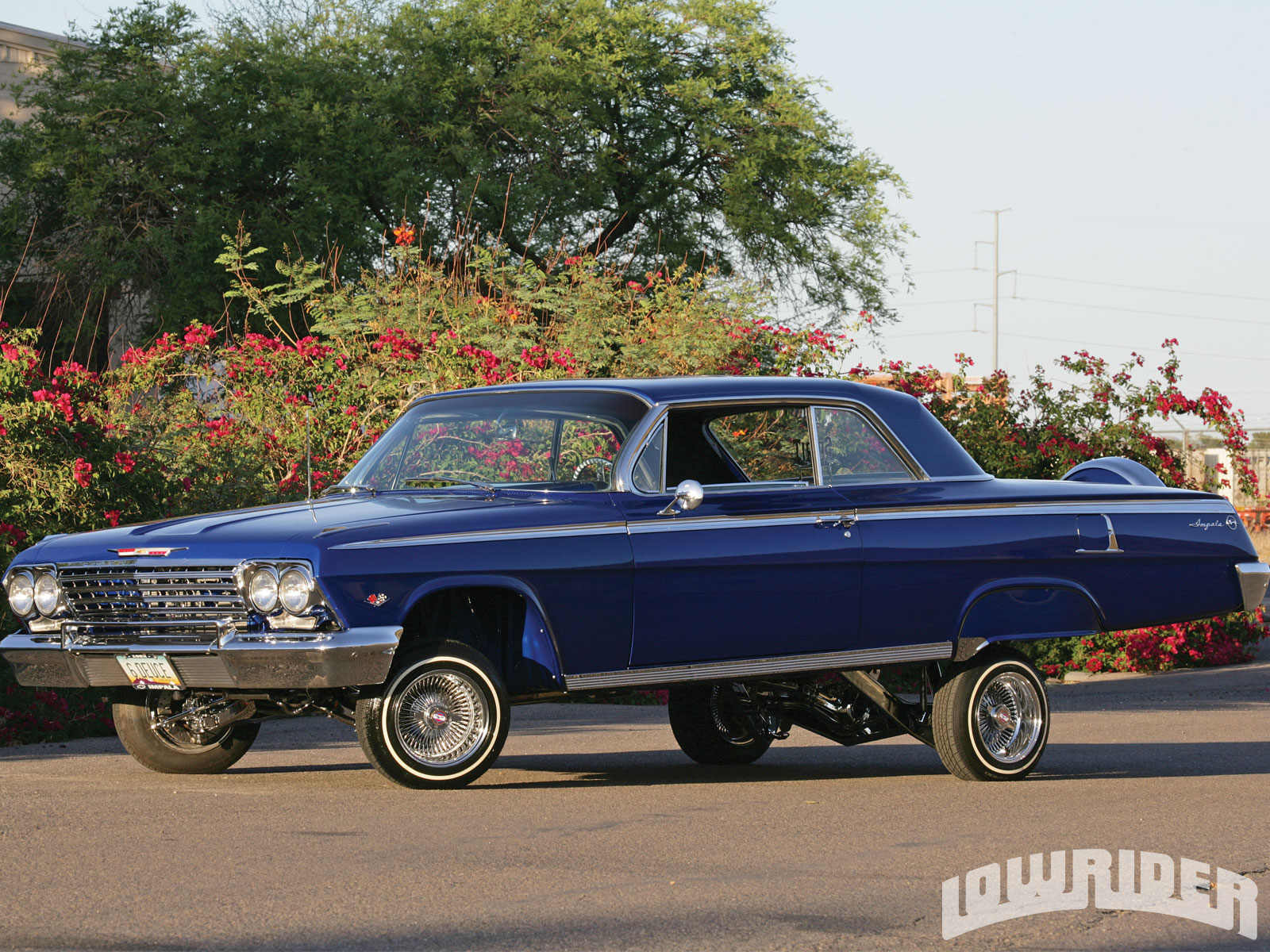 Born and raised in Phoenix, AZ., Rudy Casas was a lock to someday make his mark within the Lowrider culture. While Phoenix is now a hotbed of Lowrider activity, the neighborhood Rudy grew up in did not have a lot of Lowriders. Nevertheless, Rudy had always been in love with automobiles, and when the time came for this budding auto enthusiast to enter his high school years, the scene opened up, and he was instantly thrust into the Lowrider culture. During that time, he became good friends with Frank Castillo, a member of the Spirit Car Club. Rudy began attending Lowrider functions and cruising in his ’84 El Camino SS, which he kept in stock condition. His new friend Frank convinced him that it was time to step up and turn the “El Co” into a Lowrider. Rudy started by adding a reverse hydraulic set up, which was hidden in the undercarriage of the car. On one of his many cruise nights, he met Luis Miranda, another member of Spirit who also owned and operated a body and paint shop. Luis offered to paint Rudy’s car and he happily agreed. After receiving some minor body work, the El Camino was painted black and given ghost flames to achieve a new appearance. Since Rudy was hanging around the Spirit Car Club already, he made his membership into the club official in 1987, attending more and more shows and cruise nights with the club in the local scene.

This era marked a great time within Rudy’s life, as he spent many days and nights cruising the Central Avenue scene without a care in the world. This was the golden era of the Phoenix scene, at least until the area was burdened with the new anti-cruising laws which were passed, leaving behind “no cruising” signs in many former hot spots around the city. After a few more years, the El Camino was taken apart to be restored as a full custom show car, however, the car got lost in the shuffle of Rudy’s busy life. Rudy got into racing motorcycles and shifted his focus from four to two wheeled action. While he enjoyed this new hobby, he remained a dedicated member of Spirit Car Club and always stayed in touch with his members.

A true Lowrider can never stay away for long, and Rudy reentered the Lowriding game in 2005. His first mission was to find a new car that he could fix up. He remembered that his friend had a ’62 Impala which had been sitting idle in his back yard for about ten years. Rudy decided to check out the ’62, and he offered his friend one thousand dollars for it. His friend agreed and Rudy was the proud new owner of a 1962 Impala, which desperately needed some attention. The car was just a shell of its former self, sitting on a pile of different colored, primered body parts, with no interior or engine. Although it was in such rough condition, Rudy saw the potential in the Deuce, so he went full force in rebuilding the classic Chevy.

The car needed to be completely restored in order to be at the level Rudy desired. He started by delivering the car to his high school friend, Luis Miranda, at Miranda’s Customs in Phoenix, AZ. Luis was excited to lend a helping hand for Rudy’s project, so he began working on the car right away. They started by reworking the body, so that it could be properly straightened out and ready for paint. Before taking the body off the frame, they installed a 42-inch moon roof, to give it a more custom look.

The X-Frame was then sent to Rudy’s old buddy Frank Castillo, who reinforced it and took the suspension apart to prep the car for paint and chrome. The rear suspension was also reinforced, including the wish bone and an A-arm extension. When the rebuild work was finished at Miranda’s and Metro Plating, the body and frame were reassembled, and Frank started to work on the hydraulic system. Frank and Rudy had talked many times and formulated a plan on how the set up should be built. After a few days of brainstorming, they decided on a four-pump setup. The setup includes a floating rack with chrome pumps and chrome Adex dumps. They also added over 35 feet of custom bend and chrome tubing. The entire setup is powered by eight hidden batteries and is controlled by eight switches.

The car’s motor was replaced with a crate 383 Stroker motor and a 700R transmission. The accessories of the motor include a full Serpentine belt system, Aircraft tubes, Borla headers, a chrome alternator, a new carburetor, a water pump and valve covers.

Finally, Chaz Glen from Street Works finished the interior. He manufactured a custom painted center console, and added bucket seats, before rewiring the entire car for power windows. Chaz reupholstered the car with Black leather, giving it a Hotrod look, and accented the top of the seats with metal Impala emblems. The entire sound system is hidden and out of sight in order to give the car a cleaner look, with the exception of the amps, which are neatly placed inside the trunk of the ’62. Don from Sound Werks of Scottsdale, AZ., took care of the sound system installation.

After a few years of construction, the car was finished right before the LRM Phoenix show in 2010. The Impala took home multiple awards and cash money. Now Rudy is currently working on a ’59 Impala, which is being built with the help of some of his fellow C.C. members. Rudy would like to give special thanks to Frank Castillo, Luis Miranda, Chaz Glen, and all his Spirit car club brothers’ for helping him out with his clean ’62 Impala, “Nemesis.”