Newsletter
Sign Up today for our FREE Newsletter and get the latest articles and news delivered right to your inbox.
Home » 1984 Cadillac Coupe DeVille – Us & Them 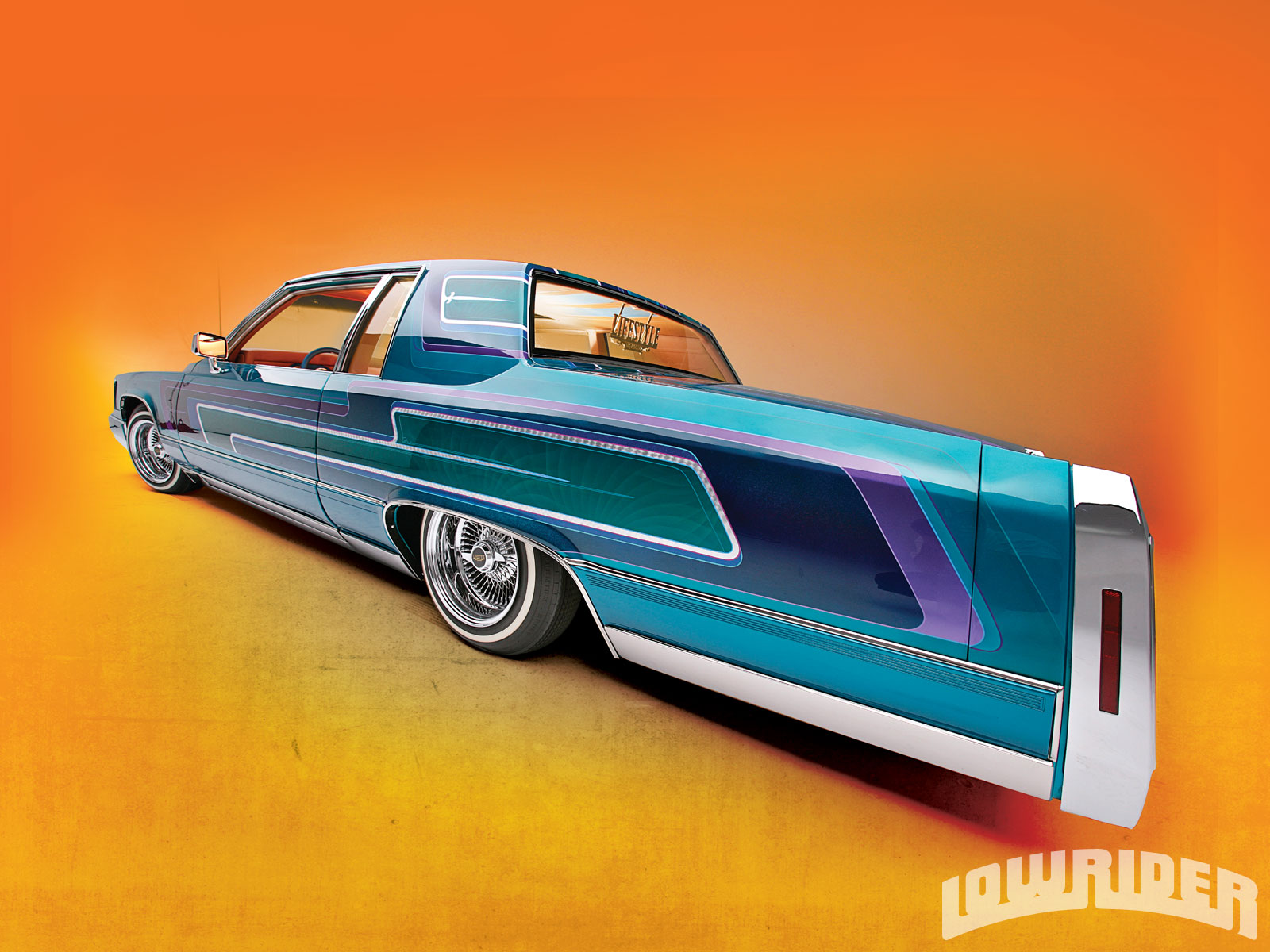 Sometimes the seeds of young Lowriders are sewn within their own family’s garden, and such was the case of Sean Hodges of Whittier, CA. Having grown up with an uncle who was a member of New Life Car Club, Sean is no stranger to the Lowrider scene. By the time Sean was old enough to drive he picked up a mini truck, and soon after, joined a Lowrider mini truck club that helped him learn the structure and the basic rules of the car club scene. Once he was ready, he stepped up his commitments and joined Lifestyle. After learning the Lifestyle way, Sean built a ’66 impala SS, but eventually had to sell it due to a divorce. After taking a break, Sean is definitely back at it with his 1984 Cadillac named “Us & Them.”

“I know the level of commitment it takes to build a car for Lifestyle CC,” Sean explains. “After a couple of years off and a new marriage, I bought a house and a couple of daily drivers, but there was one thing missing in the garage; my Low-Low. I sat down with my wife one day after a Super Bowl party that I attended with the club, and I told her that I wanted to build another car,” he says. “I had accomplished most of my short term goals in life, but there’s a hole in my heart without a plaque in my rear view mirror. I explained to her the level of commitment the club demands from their members, and also the time and money that it will take to build a car for the club. She paused for a minute and said, ‘if that’s what you really want to do I’m behind you 100%.’ So, with the green light from the wife and some money put away, I was ready to start hunting for my next Lowrider,” Sean says emphatically.

Again, the family background that Sean experienced would sway his building desires. “There were a couple of cars I have always wanted to build, but I knew that once I picked one, there was no turning back,” he says. “I could always remember back in the days driving around East Los Angeles in my grandfather’s old 1964 Cadillac.” “I remember the good times I had in it,” Sean says wistfully. “Then I stumbled on to this Cadillac and the rest is history. I purchased the car and made sure that it ran well, especially because I didn’t want to deal with the California smog laws. Once it passed with flying colors, I invested into the project,” he says.

Sean went back to the friends that had helped him in the past, and he began work on the project. Sean hooked up with WildChild Customs, who pointed him in the right direction. The car was taken to Sunroof Performers, where their expert crew blew out a hole in the roof and installed a 42-inch glass moonroof. The car was then taken to Luis of House of Pain customs, who shaved the door handles and molded up the trunk. Once the metal work was done, the Euro conversion was done by Joaquin Duarte, who worked on the car for about a month, taking the car down to the metal and building up the body work, ultimately swapping out the front fenders and header panel. The car then sat for a few months to make sure that the body work didn’t come back up. The car was then given a final block by Candy Connection of Chatsworth, who left the car ready for paint.

With a show date as a deadline, Sean’s car was dropped off to Danny D, who laid out the teals and mixed several colors. Danny started off by jamming the car to make sure that Sean was going to be happy with the overall color of the car. Once Sean agreed on the color, Danny went to work spraying the panels that he envisioned while he had the car on his infamous death row. A week from starting the work, Sean’s car was painted and stripped to what you see today. We can’t imagine what goes on in the mind of an artist like Danny D, but at least he did let us in on Sean’s paint job.

With the paint being a major focus point on the car the interior was going to be important, but not in a way so as to be more dominate than the exterior of the car. Sean trusted car club brother Tattoo Tony, who hooked him up with Armando’s Custom Interiors of Hemet. Armando’s dropped in a neutral peanut butter tone interior, which featured blue/turquoise metallic inserts. They also built a center console and dropped in bucket seats that were accented with the leather wrapped floor. The headliner also received a touch of leather, as the design was spread through out the interior. The interior was accented with chrome and Clayton Machine Work accessories.

By this point the build was in the home stretch for Sean, who took the car to Richard of Evergreen Hydraulics, to set up the car for the hydraulics. Sean then ordered a custom setup from Black Magic, which was installed by his club brothers John Hererra and Albert Gonzales. With it being crunch time before the show, Sean’s house looked like a GM assembly plant, as everybody that was able to help or support came by to assist. Ziggy helped with wiring the NOS head lights and trim, and Frank and Gil Melendez built the custom clips to hang the side Euro trim and rocker moldings, which were polished and plated by Victor of Best Polishing and Chrome of Pomona.

With Coker tires and Dayton Wire Wheels in hand, and several barbecues hosted by the Barbecue Mafia, the long journey to completing this build was finally finished, as this car made the Super Show. People had told Sean that it couldn’t be done, and that actually helped to drive him towards the perfect name for his car; “Us & Them.” Sean said, “There is “Us & Them.” US/the ones who will sacrifice and do what it takes to fly a Lifestyle plaque, and THEM/everyone else who cant handle the pressure of building a car like this.'” We couldn’t agree more.

Body/Paint: Danny D painted the car in a House of Kolor Candy teal, and it was pinstriped and silver leafed.

Tury Mota has always had a soft spot for Cadillacs. So when he got the itch to start a new project he sold his ’84 Caddy to free up some funds. Scouring the web he ran across what he was looking for, something a little more OG

By the time most young men slide into the driver’s seat for the first time, they’ve already ave a dream car in mind, but for Rick Ruiz, his dream car literally pulled up in front of him

Wife, mother, homemaker… CAR builder? While those words rarely go together, for Josefina Cornejo, they are a way of life.

The 2019 Hot Wheels Legend Tour comes to Dallas in search of the next ride finalist that will be competing to be immortalized as a 1/64 die cast replica.