Newsletter
Sign Up today for our FREE Newsletter and get the latest articles and news delivered right to your inbox.
Home » 1964 Chevrolet Impala Convertible – White Trash ’64 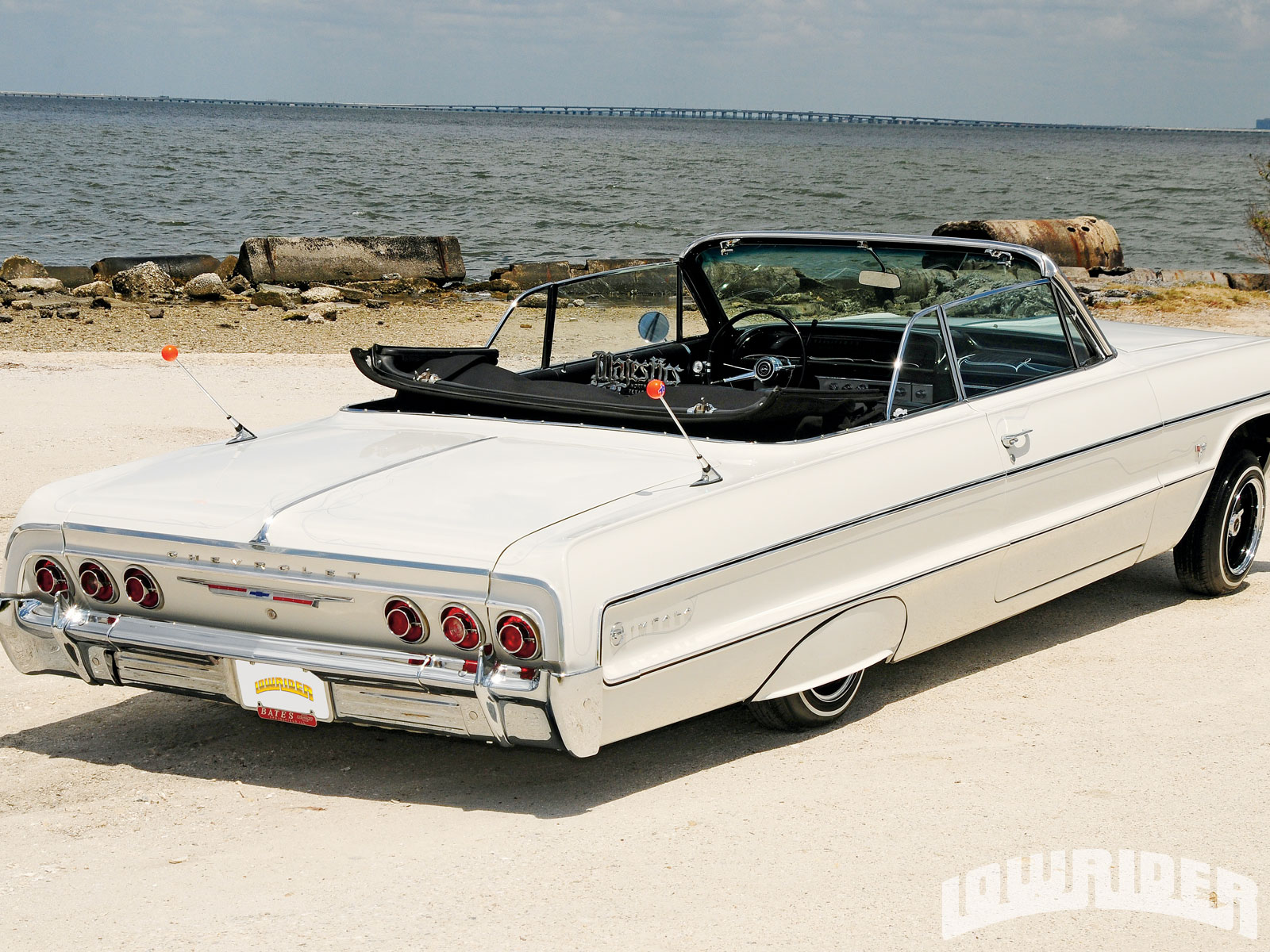 You can teach an old dog new tricks! Thirty-eight year-old Tony “Skim” Wysinger was a well known enthusiast in the Volkswagen world. For the past fifteen years, his passion has been building and designing these custom German rides, even landing on major VW publications showing his skill and creativity. A resident of Krum, Texas, Skim learned about Loaswrider vehicles from his friends. He purchased a big body Cadillac as a daily driver and eventually added wire wheels and unleashed a whole new flare of creativity.

Skim’s friend, Seth Lacey from South Florida, turned him on to a 1964 Chevrolet Impala convertible that was sitting in a shop. The car was basically a shell owned by master customizer David Hess from David’s Impala in Lawndale, North Carolina. Skim called to inquire about the Chevy, and ended up purchasing the car sight unseen. Through the next few months, parts were sent back and forth to North Carolina for David to install. The seats were ordered and installed along with the new convertible top. David painted the Impala with single-stage Dupont pure white to keep the subtle street look. A factory motor was added to get the Chevy on the road. Within three short months, the Impala was ready for Skim to pick up.

On the way back to Texas, Skim made a detour and met up with Alan & Derrick, members from the Kansas City chapter of Majestics Car Club. They brought the Impala to their shop, Street Riders Hydraulics in Kansas City, Missouri, where Fabian & Tino fitted the Impala for the suspension modification. A Black Magic setup was installed, utilizing two-pumps and two-dumps. A two-switch panel was mounted on the dashboard. Now things were coming along, and some final touches were necessary. Skim enlisted Frank Palmer in Mansfield, Texas to handle the pinstripe work. Dove gray was used to highlight the intricate lines of the Impala. Pulido Plating in Dallas, Texas chrome plated the bumpers, grille, brackets, window frames and all the latches.

This was a project that came together using the help of many others and the dedication of Skim. The Impala adds to the reputation that Majestics C.C. have built throughout the years of putting in work on quality builds. “I want to thank everyone who helped me, David Hess, Brian Thompson, Seth Lacey, the Majestics crew from North Texas, Tino and Fabian Camacho and the Majestics Kansas City Chapter, Chris Fleck and John Dodson, Bert at The Chevy Shop in California, Dirty, Jessie, and J,” Skim tells us. Their combined help ensured that “White Trash ’64” will be a fixture for a long time.

Engine: The V8 283-c.i.d.was rebuilt and a turbo 350 transmission was added. The motor work was completed by David Hess in North Carolina. The factory exhaust and carburetor was replaced by Brian Thompson.

Setup: Fabian & Tino Camacho brought the Chevy to Street Riders Hydraulics where they installed a complete Black Magic setup including two Black Magic pumps and two Italian dumps. The front is lifted with six-inch Black Magic cylinders and the rear uses ten-inch cylinders. Six batteries allow plenty of power by way of the two-switch panel on the dashboard.