Newsletter
Sign Up today for our FREE Newsletter and get the latest articles and news delivered right to your inbox.
Home » 1952 Chevrolet Truck – El Sereno 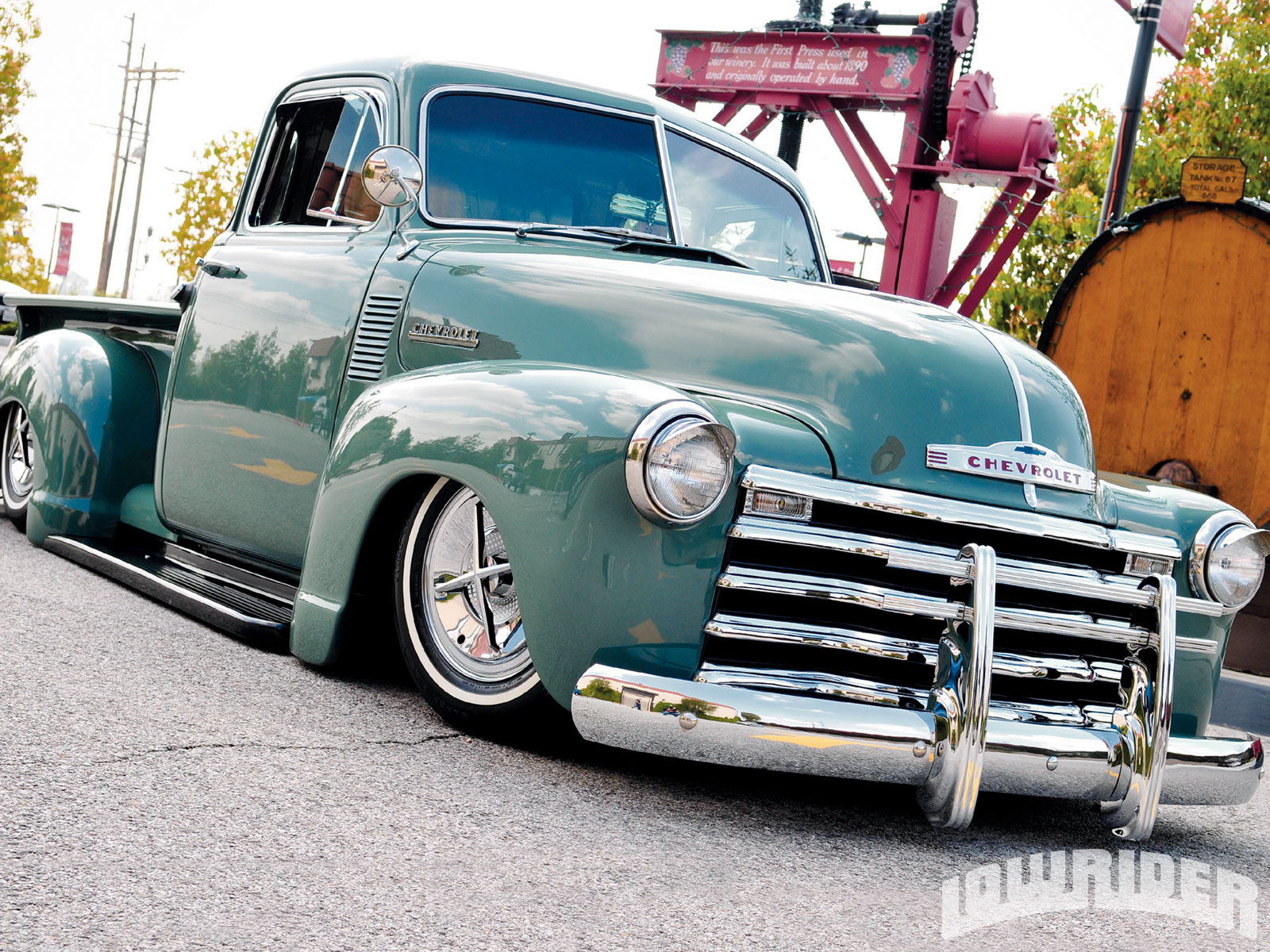 Chevrolet has produced quite a few iconic vehicles during their existence. The Corvette, Impala, and Camaro are some of the more legendary vehicles created by Chevrolet. Chevrolet also created a line of classic trucks starting with the first production model in 1918, the Suburban, the Silverado, and the El Camino. In the Bomb culture, Chevrolet trucks produced in the 1930’s, 1940’s, and 1950’s are sought after for their classic styling, ease of restoration, and their ability to lay low with the help of suspension modifications.

El Sereno, California’s Tony “Chinky” Bustamante chose a 1952 Chevy Truck for his latest build, specifically for the reasons stated above. Chinky is no stranger to Lowriding or car building. He has owned a number of cars over the years, and like many of us, he was exposed to Lowriding by his older brother and father. His father owned Chuy’s Body Shop, so he was around cars starting at a very young age. Sometimes on Saturdays, Chinky’s dad would take him to the shop and show him different things about the cars he had in the shop at the time. Chinky’s dad would also share stories of his own custom cars with Chinky. The cars he used had rumble seats, front fender mounts and lacquer paint jobs. A lot of nice cars came and went through Chuy’s, but it’s safe to say that the Lowriders were the ones that peaked Chinky’s interest.

When he was a youngster, Chinky’s older brother had a 1961 Ford Thunderbird that was lowered and sat on Astro Supremes. It also had a donut steering wheel, 8-track tape player and a color bar. His older brother’s friends also had fixed up cars, and they would all hang out at his house, so he got a firsthand look at the cars he one day hoped to call his own. Eventually, his brother went to serve in the Army and left the T-Bird in the driveway. After about a year or so, Chinky’s dad let him take it to school, and eventually gave him the car.

This as they say, is where it all began. The Thunderbird would eventually be traded for a 1954 Chevy. Chinky and his friends would hang out before and after school and cruise Whittier Boulevard on the weekends. Over the years, Chinky has bought, sold, and traded a number of rides. Right now he has the truck, a ’54 Chevy, and a Harley Davidson Softail.

Chinky is employed by the California Department of Transportation (CALTRANS) in the Los Angeles area. One day at work, his co-worker Mike Ramirez showed him some photos of a truck that was for sale by another co-worker named Glen Millinger. He went and talked to Glen about the truck. It was on hold for someone, but Glen told Chinky he would be next in line if the sale fell through. Just as luck would have it, the deal never happened, so Chinky got his shot at it. The following Saturday, Chinky talked his mom into going with him for a ride. She didn’t know where they were going and asked him, but he would not tell her. Eventually Chinky gave in and told her he was going to buy a truck. She was not happy, especially since he already had a yard full of cars. Once they arrived, the deal was made and he returned that Monday and picked the truck up and took it home.

Once the truck was home, it was time to get it in running condition. The engine had been rebuilt recently, but the water pump needed to be replace and the wrong fan was installed. One call to Joe Epstein and Chinky had the parts he needed. Finally, a new radiator was installed after a visit to the Truck Shop. Chinky was now rolling around in a stock 1952 truck, but it still wasn’t at the level he wanted it to be.

He tore the truck down and had all the panels straightened and primered. The panels were painted and the truck was put back together with all new hardware. All the chrome was redone, and headers and pipes were installed to give the truck the signature Chevy Bomb exhaust note. The interior was freshened up by Perez Upholstery in Pasadena California. Chinky decided to keep the look of the interior as original as possible, so he worked with Perez Upholstery to find the right materials to compliment the Taupe painted truck interior. He added a Clarion deck and 4 speakers to play his favorite Oldies whenever he is out cruising with his friends.

While Chinky was putting the truck back together, his mom fell ill, so the truck was put on the back burner. Things got worse, and unfortunately his mother passed away in 2007. Eventually, he finished the truck in 2008 and drove it around for a while before deciding to air bag the truck.

There was only one place to take the truck to get it to lay frame and ride like a luxury car. Ponce “The Bag Man” was contracted to perform the suspension upgrades. He first updated the front end with a TCI rack & pinion, disk brakes, CPP Master Cylinder, and all new brake lines. The rear end was notched and fitted with a TCI four link, connected to a 12 bolt rear end open driveline and topped it off with a Muncie 4 speed. Two Viair 480 compressors, one 5 gallon tank and two switches completed the suspension upgrades. The ’52 is rolling on Cross Bar Hub Caps and 15″ Radial tires. Now as you can see from the accompanying photos the truck lays frame and looks great while doing it.

The initial investment of $3000 and two years of build time, TLC, and some additional funds have finally paid off in the form of a well thought out and perfectly assembled truck. Unfortunately in 2009, Chinky’s father also fell ill and passed away. He would like to dedicate this feature to his parents. Good work, Chinky!