Newsletter
Sign Up today for our FREE Newsletter and get the latest articles and news delivered right to your inbox.
Home » 1974 Chevrolet Impala – Blue Cheese 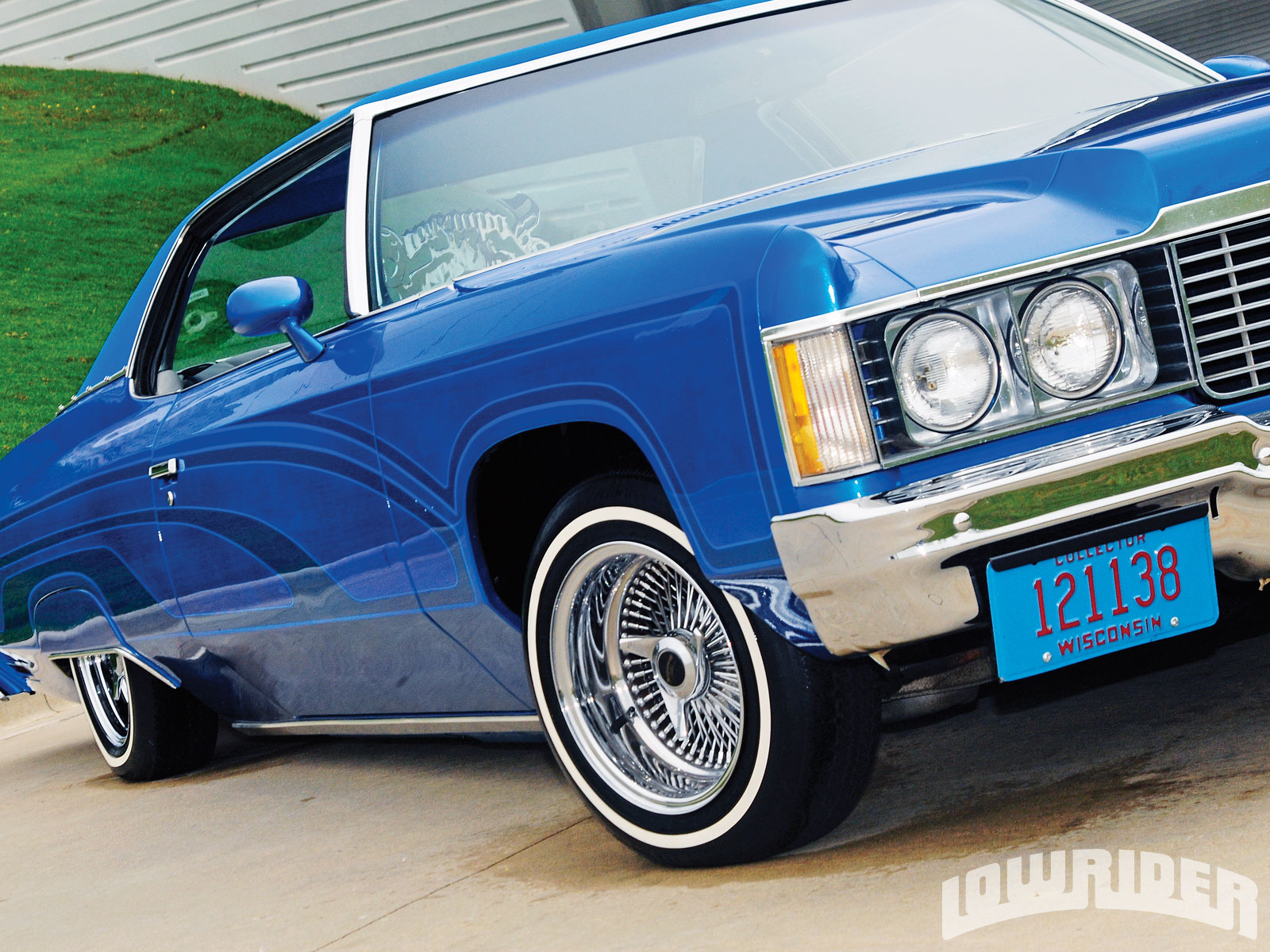 Once known exclusively as a brewing and manufacturing powerhouse, Milwaukee, Wisconsin has taken steps in recent years to reshape its cultures and lifestyles. For thirty-year-old Mario Reyes of Milwaukee, his first taste of the custom car culture began in 1995, when his cousin, Yancie, brought him to an annual Lowrider car show called Mexican Fiesta. It didn’t take long before the respect and loyalty displayed by the local car clubs sparked his own interest in creating a show-stopping ride, worthy enough to be on the pages of Lowrider.

Mario would often browse Internet sites looking for the perfect automotive canvas for his creativity. His search ended when he found a 1974 Chevy Impala in St. Paul, Minnesota. The five-hour trip was well worth it, as once he got the Chevy home, he saw what kind of masterpiece he had purchased. He brought the raw Chevy to Reyes Customs in Milwaukee, Wisconsin to lay the Kandy down, and the shop also laid graphics throughout the entire body. A custom blue top was installed to follow the new paint scheme as well. His friend, Memo, from Chicago, Illinois gave him a hand with the suspension by adding a four-pump, four-dump CCE Fatboy Edition hydraulic setup which was capable of lifting the heavy frame and perfect for achieving the ideal cruising height.

Having trusted Reyes Customs for the exterior paint, it was only right that the respectable shop be given the opportunity to handle the large interior as well. The stock seats were removed and replaced by Honda seats in the front and Cadillac seats in the rear, and both sets were wrapped in a blue suede and leather mix. A custom dashboard was molded and wrapped in leather, as were the custom door panels with embossed Impala logos. A floating center console was built down the center of the cabin and also wrapped in leather.

In order to bulk up the motor to better handle the busy streets of Wisconsin, Mario brought the Impala to his friend Rogelio Zermeno of Milwaukee. Rogelio added a new carburetor, a complete exhaust system and added chrome dressings for show. Polo Macias gave Mario a hand with the bumps, carefully installing speakers throughout the cabin, allowing for maximum-quality sound. The final step in the build came in the form of adding a set of 100-spoke 14-inch Dayton wire wheels.

Now, as a proud member and Vice President of Somos Uno Old School Lowrider C.C. Milwaukee Chapter, Mario often reflects back to how he became involved in the Lowrider culture and intends to bring his children up the same way. “When Mario puts his mind to something, you better believe he won’t stop until he has achieved it,” his wife Veronica tells us, adding “I will be beside him through every step of the way.” Because cheese is considered one of the best products produced in Wisconsin, it was only right that Mario should name this immaculate Chevy “Blue Cheese.”

Engine/Drive Train: The stock motor was overhauled and reworked by Rogelio Zermeno, who added a 2 barrel carburetor, glass pack exhaust straight pipes and chrome dressing throughout.

Body/Paint: Mauricio from Reyes Customs in Milwaukee, Wisconsin stripped the Chevy down and coated it with House of Kolor silver, blue and gold basecoat. Custom graphics were laid down by Bardo throughout the body and House of Kolor Oriental Blue was used to coat the exterior with silver mini-flake.

Interior: The entire cabin was gutted and Cadillac seats were added to the rear with Honda seats inserted in the front. The dashboard was custom molded along with a floating center console. Gray leather coats the entire interior with blue suede inserts in the seats. Impala logos were embossed in the door panels and back deck. A billet Impala steering wheel was installed. The work was completed by Gerardo Reyes of Reyes Customs in Milwaukee.

Sound System: With the help of Polo Macias, Mario added an Alpine CDA-7893 head unit with JL Audio mid range speakers carefully inserted throughout the cabin including the floating console. The subwoofers and amplifiers were hidden behind the back seat so they aren’t visible and can allow more room for his kids.