Newsletter
Sign Up today for our FREE Newsletter and get the latest articles and news delivered right to your inbox.
Home » 1965 Chevrolet Impala Convertible 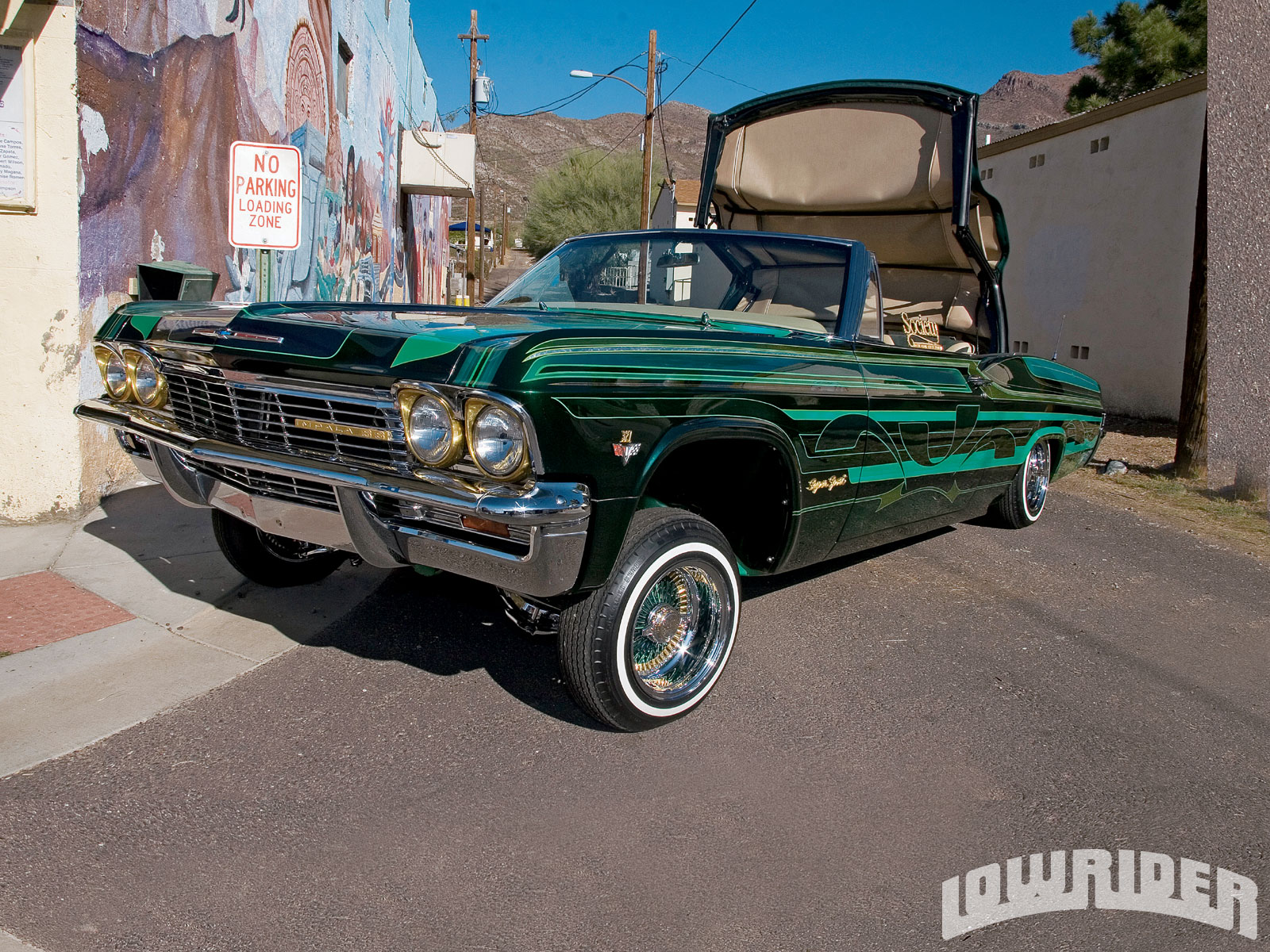 We all have our roots. They shape who we are, from personality traits, beliefs, and even hair, eye, and skin color. Many of you who have been reading Lowrider Magazine month after month for these past 33 years have Lowrider roots tied to Bombs, Impalas, and anything on wheels that sleeps on pavement. Joe Mirelez’s roots run that deep as well, as he hails from the small town of Superior, Arizona, which is known and recognized for its Lowrider culture. From mining to motion pictures, this town’s colorful past includes a Main Street shared by Carnales Car Club’s Manuel Moreno, Mario Jimenez, Clint Eastwood, and Jennifer Lopez, just to name a few. The first two names are Superior Lowriders who carved legendary marks in this town; the last two names are Hollywood Actors that made movies on the same Main Street. All four have made this town legendary in their own way. Though Joe was born in Mesa, he spent his childhood in Superior with his grand parents on Sunset Street, where he was immersed in the Lowrider scene. Watching his Tio, Ricky, and Compadre, the first site of chrome and paint on a sixty Impala hugging the pavement was all he needed for his instincts to kick in as a car builder.

His first car, a sixty-seven Impala was a daily driver that he and his best friend, Ralph Seballos, both shared interest in. They both drove sixty-sevens, and for those of you who remember your first Lowrider, these were exciting times for these guys.

After purchasing a handful of Impalas, about twenty-four of them to be exact, he finally found his dream machine in the form of a sixty-five Impala Convertible. The car was just a frame and shell, but to Joe, it was a clean canvas which needed his attention. Joe, now owning a fair share of Body by Fishers, knew that a complete frame-off was needed and the attention of a top mechanic was necessary to achieve his ideal build. He went to his dad’s friend Bob (Bimbo) Hernandez to get the project underway. Joe and Bimbo spent many hours, not only making the six-five mechanically sound with a new drive train, but adding chrome, candy and powder-coat throughout for what was to become one of Arizona’s jewels of the desert. Ideal Plating of Tucson provided the triple-plated chrome, and when it came to the body work and paint, it took the talents of two shops to satisfy Joe’s vision of his arte on wheels. It was Luis (Chileen) Montoya who finished the car to Joe’s standards, and made the friendly competition green with envy, just like Joe’s candy patterns. The patterns and graphics were then highlighted with an expert stripe job by Bugs Auto Works. Like a thrill ride you love, once you get hooked, you keep going back for more, so Joe decided that the chrome undercarriage and engine compartment needed more attention. Painter Ray “Bones” Salazar candied the engine block, extending candy graphics and patterns on the car’s belly while Mickey’s Pinstriping and Lettering finished off the new designs with his precise striping. All things considered, the selective Joe knew that it would take a collaboration of Lowrider master craftsmen to satisfy his sweet tooth. After all the gallons of candy and clear were finally done, the only appropriate name Joe could bestow on the car was “Candy Man Sixty-Five.”

When it was time for the interior to take shape, Joe took no chances. He was guided to Lowrider Veterano John (Bully) Rios. Bully’s workmanship and reputation is well respected, as his Lowrider roots go back to Pride Car Club, Mesa’s first Lowrider car club, and the fact that he also operated Phoenix’s Otto’s Hydraulics back in the 70’s. Bully’s Custom Upholstery transformed the convertible into a custom that meant business. Thirty five years of experience sure makes a difference, even if you are using the same sewing machine! With Joe’s direct input, the custom seats, panels, and dash design made the Impala worthy of and achievement that Joe could be proud of.

During Joe’s debut of “Candy Man Sixty-five,” he became very active in the Lowrider community. Finding a common interest with Society Car Club, he was a natural fit. Many of its members have ties between Superior and Mesa. It’s true that there’s no place like home, and Joe found that with this Arizona-based Car Club, as they never forgot where they came from. His decision to join was even easier because he grew up seeing the Society cars of yesteryear, like Anthony Lugo’s “Playboy ’64,” and Mickey Horton’s ’54 “Color of Money” Bomb. He wants to continue the tradition of building memorable cars flying the Society Plaque. Joe would also like to thank all of the positive people who helped make his creation possible. Though many times he became frustrated with the negativity associated with lessons learned from nightmare shop stories, he kept the faith and followed the positive influences in his life. Don’t think this is the last time you will see one of Joe Mirelez’s creations, remember, Lowriding is in this guy’s roots; ask him how his sixty-four Impala, his forty-eight Fleetline, or his chopper Lowrider Motorcycle are doing these days…