Newsletter
Sign Up today for our FREE Newsletter and get the latest articles and news delivered right to your inbox.
Home » 1962 Chevrolet Impala Convertible – Fortune Teller 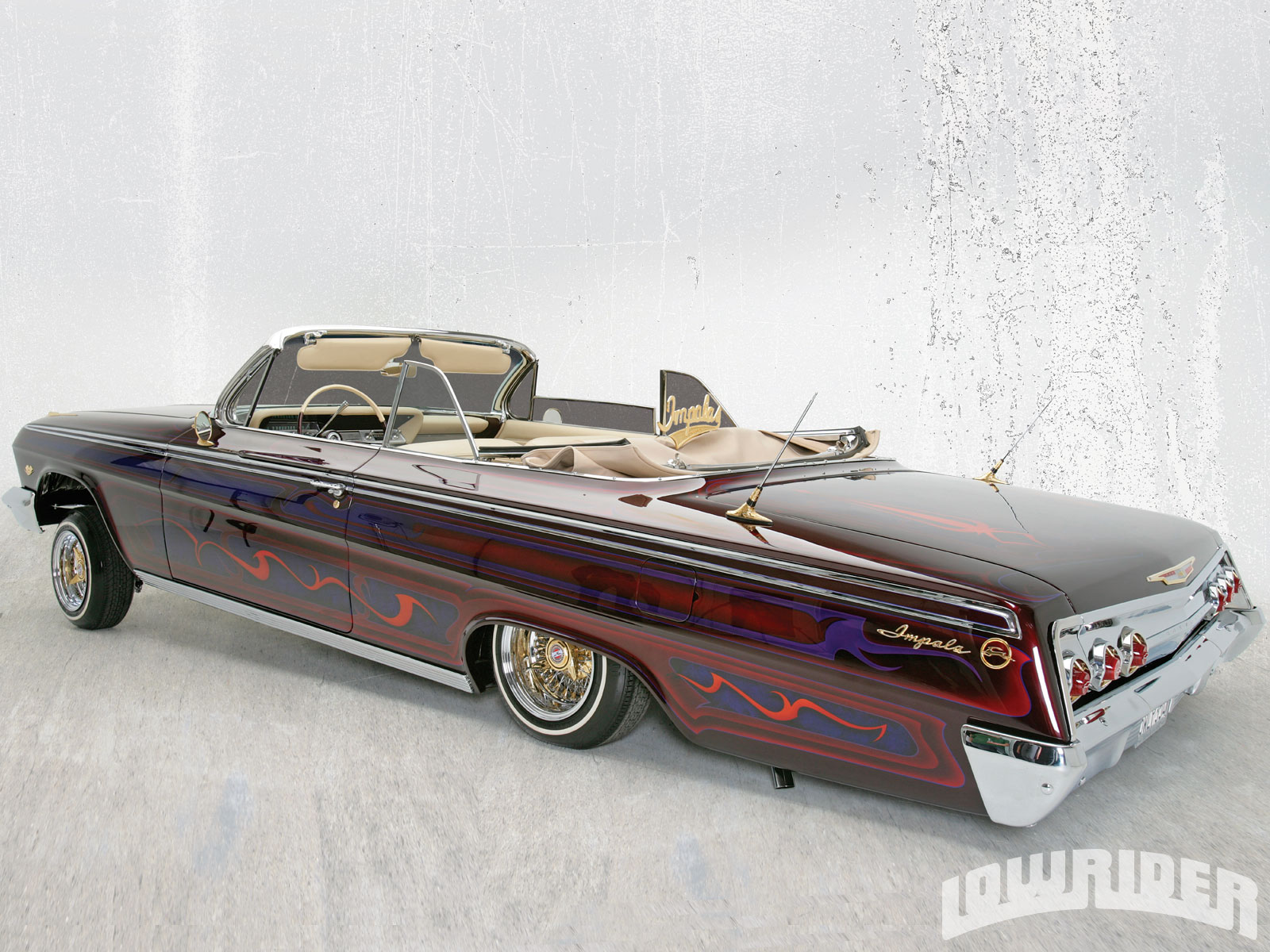 Victor Charles has always been involved in Lowriding, having taken interest in the culture from an early age. The current general contractor’s family was always into Lowriding, so naturally, Victor was immersed in all aspects of his family’s automotive lifestyle. Because of this long history with cars, Victor has seen his fair share of makes and models, and has ultimately fallen in love with the storied Chevrolet Impala. Victor has always especially liked the ’62 Impala, due to the fact that they were built a little bit shorter than the ’63 and ’64 models. He also liked the fact that there didn’t seem to be as many of these classic machines out on the road, so he decided that he would someday build one of his own.

In 2007, Victor joined the Stockton chapter of Impalas Car Club with his own brown ’62 Impala hardtop. One day when Victor and the Impalas rolled up together to a car show in Chico, he realized that he had the only hardtop in the group. “That’s when I decided to get me a convertible,” says Vic. Instantly, his search for a ’62 drop top began, and he was pointed in the right direction by fellow club member Ralph Garcia, who knew that there was one for sale in the Stockton area. The owner of the ’62 had kept the car in storage for a while, as he was unable to sell it due to the fact that buyers could never seem to meet his asking price. Vic also made him an offer below that asking price, but this time, the owner agreed upon it. “When the time actually came to make the transaction, the guy would never come through,” says Vic, remembering the frustration. That’s when one of Vic’s friends told him, “If you really want it, offer him his asking price and see if he comes through or not. That way, you’ll know if he’s wasting your time.” Reluctantly, Vic did just that and the deal was sealed. He knew that offering the full asking praice was the right thing to do, and as a car man himself, he understood why the owner was being so hesitant. “It was a sentimental thing for the guy. He had the car for so long that he didn’t want to get rid of it.”

A frame off restoration had already taken place on the ’62 convertible. “When the guy pulled it out of storage, the car was flawless,” says Vic with astonishment. “I didn’t really have to do anything to it.” The car had a yellow paint job with pearl on it, wheels, and a nice stereo. Still, Victor had other ideas for this already immaculate Impala. “Everyone has their own flavor, and the way the car was done wasn’t my style,” says Vic.

Vic drove his classic around for two weeks before he stripped it down to the bone and began cutting it. “I already had plans for it before I got it,” says Vic with a smile. Within six months, Victor had the car completely redone and looking like a whole new Lowrider. “I mostly did it to advertise the restoration shop I owned at the time.” Some of you avid readers out there might remember the first version of the car as “Hidden Treasure” from the August 2009 issue.

One day, Vic got a small scratch on the front fender of his show car while pulling it out of an enclosed trailer, and nobody wanted to attempt to color match the car, so he decided to pattern it out. He also added all of the new engraving that you can see on the car, and got a new set of Zeniths as well.

When asked what the hardest part of the build was, Vic confidently responded, “nothing in the build was very hard, it was more time consuming. You get anxious to get one thing done to get to the next, but you can’t rush a job like this.” Victor’s future plans for the car include adding murals under the hood and trunk, so that he can finally say that he’s finished with it.

This pristine ’62 Rag gets plenty of street time, and you can constantly find Victor rolling it to local shows and BBQs; he even cruised the Vegas strip last year after the Super Show. Vic wants to thank Raul Valenzuela, Vinny Burnes of Vinny’s Customs and Graphics, and Impalas Car Club for backing him up and always being there for him. “A special thanks to my wife Regina, and my kids for putting up with me when I did my car twice back to back like that,” he says. Don’t worry Vic, I’m sure they understand, like we all do, that a true Lowrider’s work is never done.

Set Up: A four pump set up with two pumps Sinisters in the trunk and two mounted on the firewall by Victor Charles and Raul Valenzuela.