Newsletter
Sign Up today for our FREE Newsletter and get the latest articles and news delivered right to your inbox.
Home » 1954 Chevrolet Delray Coupe 210 – El Pachucotone 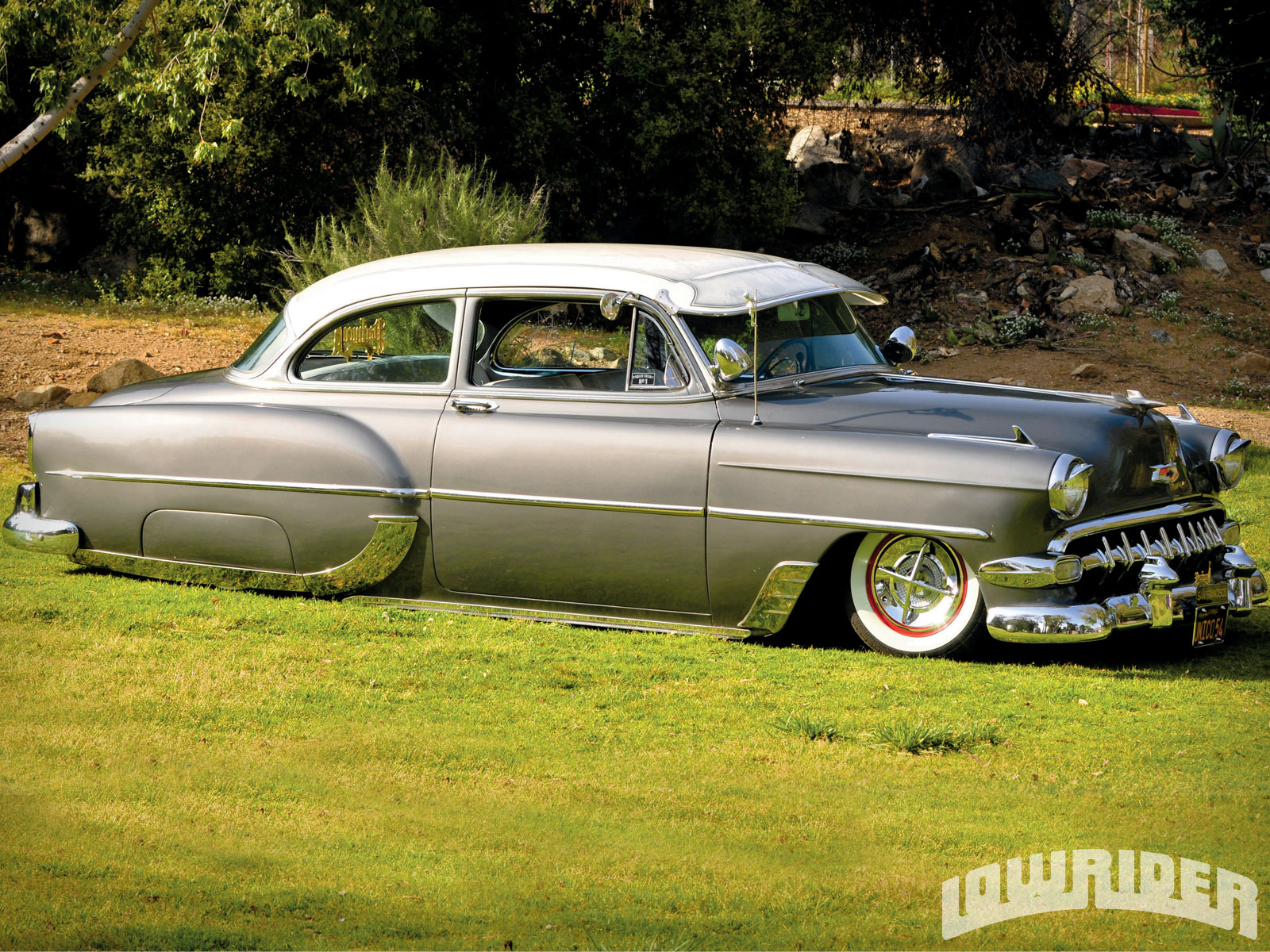 San Francisco’s Mission District, also known as “The Mission,” is one of the oldest neighborhoods in the city. The neighborhood has been in existence since the early 1800’s, and has been home to a strong counterculture in arts and politics, dating back to the civil rights movement. The Mission is also famous for its murals located on buildings, walls, and in alleys that were initiated during the Chicano Mural Art Movement. Carlos Santana is a product of this neighborhood. He graduated from Mission High School and as you know, went on to become a world famous musician. The district was also a hotbed for Lowriding in the 1970’s. Simply put, Mission Street was the place to see and be seen.

Tony Ibarra attended high school in “The Mission” when he first encountered Lowriding. As Tony put it, “it was mandatory to have a Lowrider on 5.20’s”; at least if you planned on cruising Mission Street. His revelation came when his brother returned home from Los Angeles with a ’69 Grand Prix, which was dropped with no springs. Just seeing that car made Tony hooked on Lowriding. By the time he was a junior in high school, he was cruising to school and Mission Street in a ’64 Impala.

The Impala had a Cherry Red paintjob, original black interior, and a chrome dash and steering tilt column. Naturally, he was rolling on disc brakes, Tru Spokes, and 5.20’s. Tony and the Impala were regulars on Mission Street. When his first son was born, his financial situation basically came down to three choices; rent, diapers, or partying. Tony took the responsible route and got rid of the car to provide for his family. Tony owned the Impala from 1978 to around 1982, but unlike many drivers featured in this magazine, Tony did not go out and buy another car to build. Why you ask?

Tony had been getting into trouble off and on for a few years, and as a result of the aforementioned trouble, he did a stint in the prison system in the State of California. Finally, when his youngest daughter was born, he decided to get his life straight and stay out of trouble. He kept partying until 6 years after her birth, when a life-or-death situation forced him to stop partying all together.

In 2007, while attending a car show one weekend, Tony saw a flyer on a taco truck advertising a 1954 Chevy for sale. Tony called the number on the flyer and found out that the car was still available. He went to see the car and discovered that the car had been in storage, and was drivable. Tony drove it home after handing the seller the 8 grand he was asking for it. This was his first Bomb, and also his first time starting a project, as his previous Impala was pretty much finished when he bought it.

Overall the ’54 was in good condition, but it needed a minor overhaul. The car had hydraulics on it when Tony bought it, but he replaced them with a Nair bag suspension from TP Customs. The engine was refreshed with a new radiator, water pump, new fuel system components, and finally, detailed engine wiring. Tony’s fellow Pachuco brother Jamie Ramirez did all of the engine and wiring out of his garage. Jeremy at Sanderson Headers installed Fenton headers and cherry bombs to help get the loud rapping sound that every bomb should have.

The paint on the car was decent, so Tony had it detailed. The roof was reworked by Tyler from TP Customs, who added a silver lace and pattern job over a white pearl. Once the exterior was up to par, Tony moved onto the interior. The carpet was replaced along with the headliner, kick panels, and rear deck lid. One of the local stereo shops installed a new system for the ’54. Tony did not want anything too crazy, so he just had the shop install something that would play his Oldies over the loud rapping exhaust. The final touch to the interior upgrades was the Pachuco Car Club plaque.

Tony connected with Pachuco Car Club after seeing them at car shows and befriending them. He has been a member for two years and feels fortunate to be a part of the brotherhood that is the Pachuco Car Club. Tony had made numerous trips to Southern California in the ’54, and he wants everyone to know that the Pachuco Car Club drive their cars! Tony is not finished with his ’54 yet, however. Eventually, he would like to repaint it and go with a new look, but for now, he wants to cruise. Those repainting plans are going to be put on hold until he finds the time to stop cruising long enough to start the rebuild. Tony is an example of someone who turned their life around, and found something positive, like Lowriding, to help guide them on the right path in life.