Newsletter
Sign Up today for our FREE Newsletter and get the latest articles and news delivered right to your inbox.
Home » 1981 Cadillac Fleetwood Brougham – Vitamin C 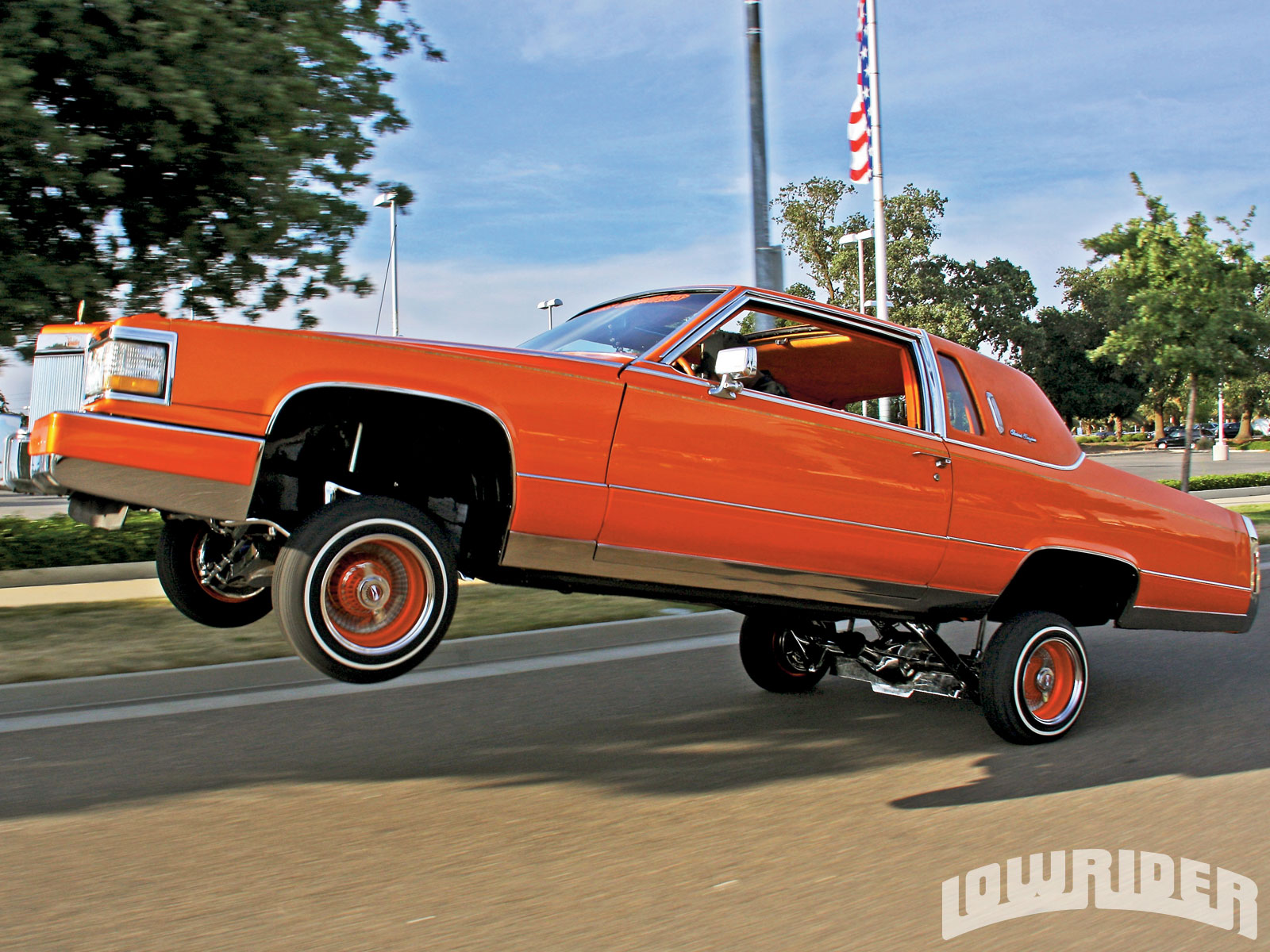 As a kid sitting in his grandparents’ front yard, Daryl Harris remembers the first time he saw his older friends, Daniel and Rigo, nosing up their G bodies on the street. “From that point on, it had me” says Daryl with a laugh. At that time, most of his friends were into sports, but Daryl was into cars. “That’s around the time when I started buying Lowrider Magazine,” remembers Daryl. As a youngster that didn’t have a car, Daryl would write down every single piece, part, wheel, and set up that he ever wanted in a notebook – a notebook that he still has to this day. He even wrote down prices and contact numbers. This dedication and attention to detail would shape his Lowriding career forever.

“As I got older, the homie Rigo sat me down in his car and showed me how switches worked,” Daryl recalls. Rigo even took him on his first ride, and three-wheeled it, thrilling a young Daryl. “My goals in life changed at that moment,” he remembers with a smile. As a youngster, Daryl had seen his share of amazing rides in both the pages of Lowrider Magazine, and at the car shows he attended. One thing that he noticed was that he didn’t see too many of these show cars out on the streets riding, and even less of them out hitting switches or three-wheeling. “It really captivated me when I saw people [actually] getting out and rolling their cars,” he says. Daryl believed that things were built and designed to be used, and this mentality runs deep within his family for a reason.

Daryl’s mother served in the Army for twenty years, and his grandfather served in the Air Force for nearly forty years. Couple that with the fact that nearly all of his uncles and aunties also served in the military, so it’s safe to say that Daryl comes from a deep military background. This gave him a sense of dedication as well as a great perspective on accepting people for who they are, not what they look like. Daryl grew up without seeing segregation, having friends from different cultures that had varied interests also played a big part in his life.

His family always knew that he would end up in the military but like most teenagers, Daryl hit a rebellious stage and was not interested in pursuing that future. Deep down, he knew that one day he would still follow that path, but at this age, all that was on his mind was for him to begin his Lowrider career. Purchasing his first Lowrider, a 1984 Cutlass Supreme at age sixteen, he spent every free minute cleaning it and polishing it. Working and saving up, he was able to get his first set of knockoffs and before long; he got his first set up. Right after high school, he started working three jobs, in order to finance his car build. With the income from these three jobs, he had enough money to build his car, but he didn’t have enough time to work on it. One day his grandfather Leonard Smith sat Daryl down and told him “You can have three jobs forever, but you have to really look at what you want from life.” This wisdom sank in, and this was the moment when Daryl knew he had to make a change in his life, so he joined the military.

Daryl started off as a heating and air ventilation technician in the military, and that experience, along with his added carpentry skills, gave him the knowledge to do his own welding and wiring. Having the time, money, and experience from his military job, Daryl finally began his project. Having that good foundation also gave him the chance to get out there and get some “seat time,” so he could really ride. Like most new riders out there, Daryl learned from trial and error. “You get out there and you get switch happy, you break stuff and you learn from that.”

As he began building cars, he really keyed in on building a car that was show quality, but could take the abuse of every day street riding as well. Always wanting a certain set of cars, he explains the time he first saw a Euro Cadillac “I remember when I saw my first Euro Cadillac, I didn’t even know what it was, but I knew I wanted one.” After some research, he figured out that you couldn’t just buy one at a car lot, you had to build one. “I’ve worked real hard to have what I have, and I’m proud of that,” he explains “You don’t have to do dirt to have nice things in life, you just get out there and work hard in order to play hard.” Not only did Daryl build himself a Euro Cadillac that he can show and hit the street with, but he also built himself one that can grace the pages of Lowrider Magazine. Good job Daryl!

Daryl Harris would like to thank God, because without him nothing is possible. He would also like to thank Kita Lealao, who was a big inspiration for bringing down the racial wall during a time in life when people were content to stay segregated, Miguel Garibay, Max Alvarado, Lil Rick, Dwight, Eric, Jason, White Mike, Rob, Vic; his Individual brothers, also get kudos for helping to keep his mind motivated, focused, and ready to ride. He would also like to thank his wife Marian, who has been there for him, and supported him 110%. “She never tried to stop my hobby, she was always pushing forward with it and I can’t thank her enough for it.” Daryl adds, “I also wanted to dedicate this to my grandmother.”

Body/Paint:
Always wanting a Euro Caddy, Daryl upgraded his ’81 Cadillac Fleetwood front clip to an updated 90’s front clip, while also adding the fiberglass front, back and side panels for that clean look that only a two door euro Cadillac can get. The House of Kolor “Sunset Pearl” was sprayed by Ben out of San Jose. The Delgado brothers took care of the pinstripping and gold leafing.

Interior:
The upgraded ’90’s dash was fiberglassed and painted to match the car. All the interior moldings were painted orange to complement the Cadillac pillow style interior. An ACC carpet and Nardi steering wheel was added to finish off the interior.

Sound System:
With the help of his fellow Individual club members, Daryl installed a Pioneer head unit, speakers and amps.

Tires:
13×7 Zeniths that were powder-coated Sunset Pearl to match the luxury ride.