Newsletter
Sign Up today for our FREE Newsletter and get the latest articles and news delivered right to your inbox.
Home » 1937 Chevrolet Righthand Drive – Original Gangster 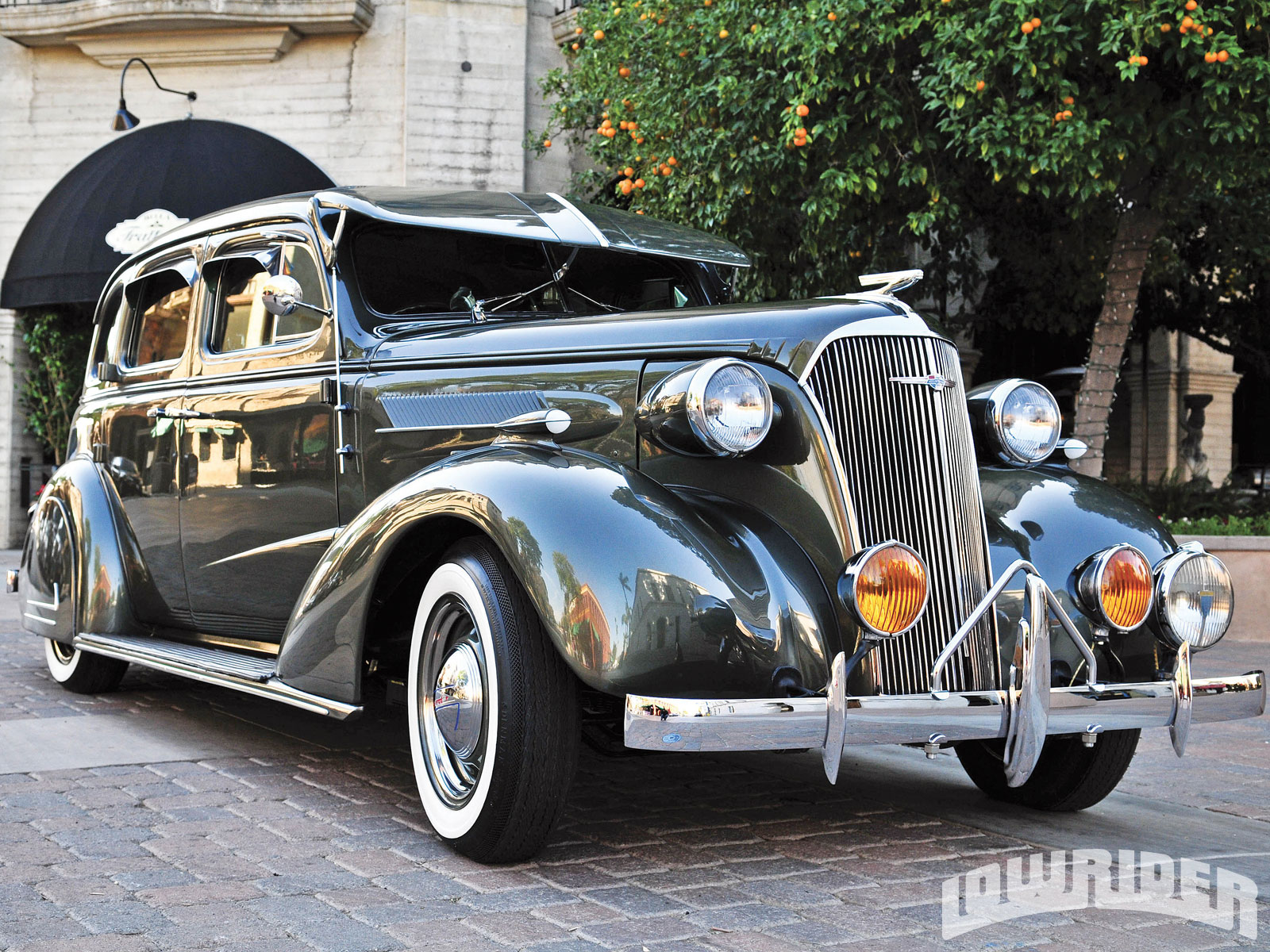 Time and time again, we ask our featured vehicle owners how they got into lowriding. Many credit their father, brother, uncle, or a friend for their introduction to lowriding. Ron Kuan can credit his mother for his introduction. Yes, you read right, his mother.

Back in 1974, Ron’s mother bought a brand- new Chevy Monte Carlo from the world famous Felix Chevrolet in Los Angeles, California. She promptly added some Cragars and 5.20 tires to the Monte, and Ron was hooked from that point on! Just like that, another lowrider was spawned. Ron and his mother would be driving, and she would constantly quiz Ron on the types of cars that they were passing; he would have to yell out the year and make of the car. During those formative years, his love for the Chevrolet would develop.

In the summer of 1983, Ron’s mother took him to the Rodium Swapmeet in Gardena, California and bought him a Schwinn bike frame, spokes, whitewall tires, and the rest of the parts he needed to build his first lowrider bicycle. He worked all summer on the bike, and the following year, he was riding the bike at his grandmother’s house in Compton, California, when it was stolen from him. His mother wanted to replace it, but Ron felt obligated to replace it himself. After all, he figured it was taken from him, why should she have to replace it? For the next two summers, he worked in downtown Los Angeles loading and unloading trucks. He saved all the money he earned, and at the age of 15 1/2, he purchased a 1965 Chevy Impala SS. From that point on, Ron has kept a Chevy or two in his garage. Ron has owned more than twenty-five Chevys since the ’65 SS!

Growing up in Lynwood, California, Ron would see Classic Memories Car Club members in his neighborhood. Matter of fact, he grew up around the corner from the club’s original members Conrad, Gerardo, and Luis. The club inspired him to graduate from Impalas to Bombs, so in 1997, he joined the club and never looked back. The camaraderie within the club and the family vibe it provided were also huge draws for Ron. He has 13 years in the club, and is looking forward to many more years with his club’s brethren.

In 2003, Classic Memories Club President Conrad “Mr. Bomba” Garcia brought over five righthand drive Chevrolets from New Zealand. Ron got first pick at the rides and picked this 1937 Chevy. He had his eyes on a super-clean, turn-key 1939 Chevy, but it was not in his budget, so the ’37 went home with him. Needing to secure some more money, he put it away until it was time to do a proper restoration.

Over the next five years Ron built, bought, and sold a 1957 hardtop Chevy Bel Air, a 1964 Chevy Impala SS convertible, a 1942 German Helmet Fleetline, and a 1960 Impala. After each sale, Ron paid off some bills, took his family on vacation, and put some money away for the ’37’s restoration.

In the summer of 2008, Ron decided to go ahead and start the restoration. He called on his fellow club members to help him with the “Original Gangster Project.” The car and frame was dismantled, so only a shell was left. All of the chrome and stainless steel were sent out to get redone. All of the suspension parts, as well as the frame were sent to be powder- coated.

Ron had the body sent to Imperial Body, where Capi and Cuco worked their magic, bringing the body back to life. Capi and Cuco had assisted in the builds of former Lowrider Magazine title holders like “Blvd Bomb,” “My 38,” and “Greenade,” so Ron knew it was in good hands. Once the frame and suspension were returned, Ron called Gerardo “G” Yanez, owner of “Blvd Bomb” to re-assemble the frame and suspension. Ron then took the body over to “G’s” and had G and Maniac put the car back together, to get it back to its original state. Mark the “Glass Man” was tasked to replace all the glass, rubber, and felts. Pun then installed the in-car entertainment, and then East Los Angeles’ Atlantic Muffler added the straight pipe setup for the raspy exhaust note we all know and love.

Vic, of Victor’s WoodGrain in Anaheim, California, took care of the woodgrain restoration. He was the obvious choice, since he has worked on numerous high caliber cars. Once the sounds and woodgrain were complete, Ron had Mando’s Upholstery in San Pedro, California, cover the interior with a beige mohair fabric. He then added just about every accessory available for the Chevy, including an OG super ray passing light, OG 1937 foglights, front and rear bumper guards, and a Sherrill compass, just to name a few. The last, but not the final thing, Ron’s modification on the Chevy was to have Joe Epstein lower it. After a year and a half, the car was ready to hit the streets. The car has not been to any shows yet, but we are sure that once it does, it will collect more than its fair share of awards.

Now that this project is done, Ron does have another project build he has already started on. This one is sure to be another magazine feature-worthy project. His children will also be getting started on their own projects. As with any build, Ron has a few people he would like to thank. Ron would like to thank his family, his fellow club members, and especially “G”, Vanilla, Maniac, Capi, Cuco, Vic, and Mr. Bomba for all of their expertise and assistance on the Chevy. Ron also let us know that we should expect a lot from Classic Memories in 2010. We cannot wait to see what new rides hit the streets with a Classic Memories plaque in the rear window!