Newsletter
Sign Up today for our FREE Newsletter and get the latest articles and news delivered right to your inbox.
Home » 1984 Cadillac Coupe Deville – Eyes Without A Face 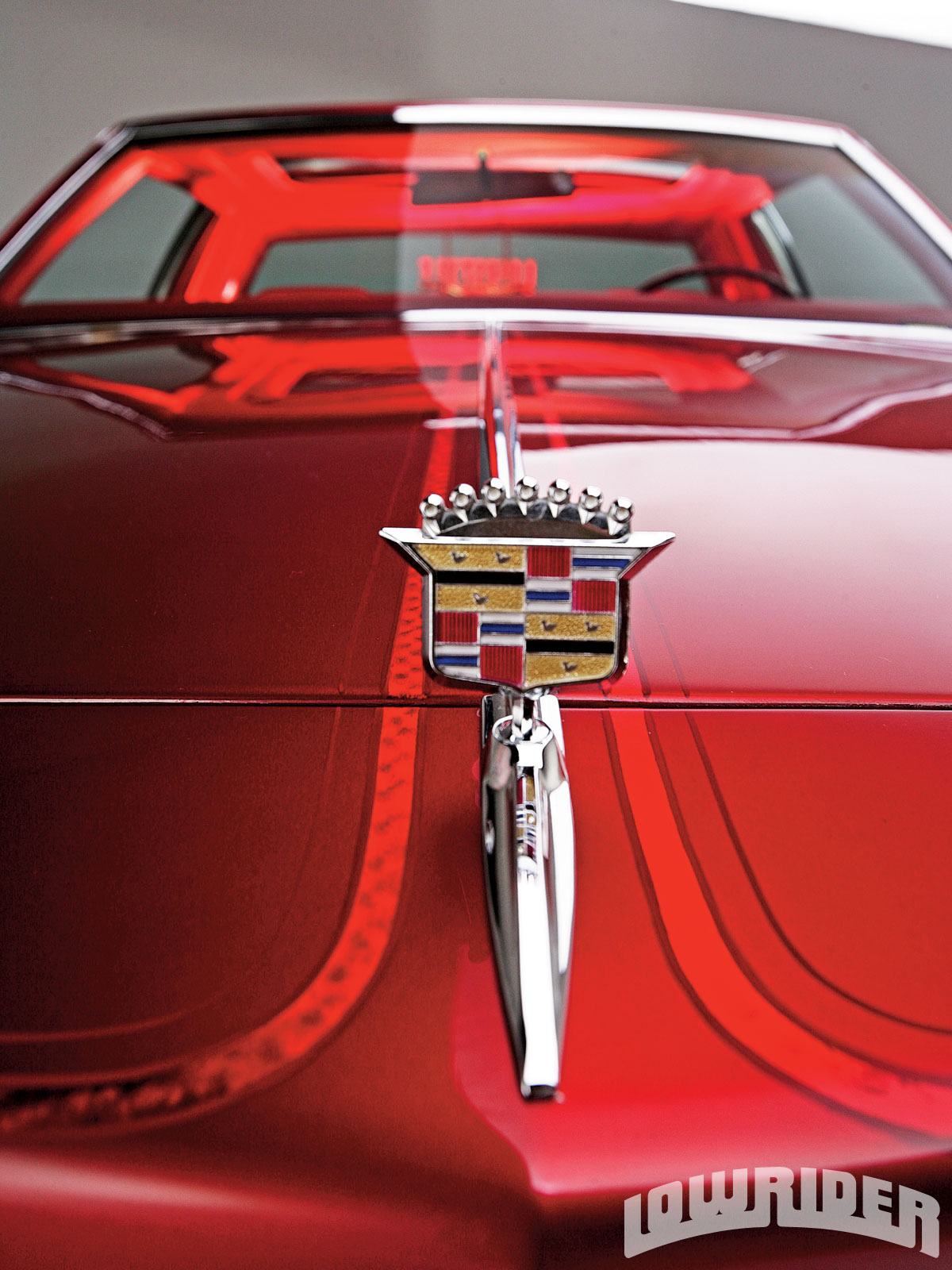 Every Lowrider community has that one man that seems to have owned cars forever, and holds the neighborhood standard for cruising and developing the perfect lowrider. Rick Ortega was that chosen figure within his home community of Atwater Village, CA. All the youngsters in the neighborhood would gaze in awe at Rick’s machines, especially when he would hit the switches, making his machines dance with the perfect boulevard two-step. Rick, who now lives in the city of Covina, California, has owned a few cars in his lifetime, including his signature car “Aladdin.” This ’64 Impala set the bar for detail and craftsmanship on the scene back in the mid 90’s, making Rick a household name within the community.

While Rick enjoyed his local celebrity, his life had changed, and that change would ultimately bring him new responsibilities and priorities. After getting married to his wife Mona, Rick reevaluated his life, and realized it was time to build a future for his wife and three daughters. He realized that the first step towards achieving this future would have to come from making a huge sacrifice; it was time for Rick to sell his prized possession, the “Aladdin.” Though it hurt Rick to part with his baby, he knew the right thing to do was to sell it, and figured that he would instead buy a more feasible car to drive. One day after visiting his mom in Atwater, he found this clean ’84 Cadillac Coupe DeVille for sale, and, after a little negotiating, the car was on its way home with Rick in the driver’s seat.

Always eager to build his cars with a unique style and willing to take risks, Rick wanted to make this Caddy stand out from the build techniques that were common among Cadillac enthusiasts. At the time, most 80’s Cadillac owners felt it necessary to update their toys with a Euro clip. Rick remembered how these American beauties were when they were brand new, and decided against the Euro clip, opting instead to build the Cadillac in a style more true to its own era. This build meant a lot of work, and started with Rick meticulously going through the entire engine to ensure that the car would be truly reliable transportation. Rick had a method to his madness, as he was planning to drive this car daily, hoping to show it off at every possible opportunity.

The car was given an initial tune up, and was then taken to Richie Valles of Unique Twist in Burbank, CA, who took the Caddy down to the metal. This car was in cherry condition, so the body work needed was minimal at best. Modifications given to the Caddy at this time included shaving the emblems and door handles, as well as adding a 44-inch moon roof to the car. The Caddy was then sprayed in a House of Kolor lacquer Brandy Wine, and the three-stage paint job was executed immaculately, leaving the Coupe DeVille looking like a completely different car upon completion.

Once Rick took the car home, he had a minor setback that would end up becoming a blessing in disguise, and a blessing that would accidentally help him take the car to the next level. While Rick was working on the car, a cabinet door in the garage swung open a little bit too far, putting a small chip in the once-pristine paint. Frustrated, the situation left Rick no choice but to take the Cadillac to the extreme. The straight candy would have to receive a new facelift before it even got a chance to see any action on the streets.

After the accident, the car found itself back at Unique Twist, where it was given a few extra additions that really dressed up the exterior. Some of the upgrades included pinstripping by Rick Grindle, who expertly laid out the subtle red striping designs to complement the body-lines. Joe Montana then painted murals throughout the car using pearls and candies, leaving the car covered with ghost murals of genies and girls. These scenes were done as a tribute to Rick’s old “Aladdin” car. Montana’s painting technique is amazing in the sense that these pearl and candy murals can only be seen in certain angles. The exterior paint finish was complete, leaving the Caddy looking even more amazing than before, but in order to finish off the car, Rick clearly had his work cut out for him.

Now that the exterior of the Coupe DeVille looked the way it did, Rick realized that the whole under side of the car would have to be painted and chromed out in order to match the amazing paintjobs the car had just received. After carefully making sure that there would be nothing else in his garage that could damage the car, Rick and friend Douglas Rodriguez removed the frame and engine from the vehicle. He began the upgrades by molding the frame, using a new welder that he had received as a gift from his loving wife Mona.

Rick spent the better part of the next few weeks reinforcing and molding the frame, so that it could withstand the stress from the hydraulic upgrades that would come later in the build. After completing the reinforcement, Rick sent out the frame to Precision Powder Coating in Santa Ana, where their expert staff powder coated the frame in a candy Brandy Wine finish, used to match the exterior of the car. Now that the frame was at the powder coater and out of his way, Rick moved onto the belly of the car, and sprayed it to match the exterior of the car. All of the molded suspension and exterior trim was taken to Jesse and Jose of Universal Plating in Irwindale, since these were Rick’s go-to-guys for chroming. The staff at Universal had previously chromed his “Aladdin” car, so they were ready to deliver the quality shine that Rick was looking for.

With the outside of the car and its frame painted and chromed, Rick began the task of detailing the stock 4.4 liter engine. This 4100 engine was candy painted to match the rest of the Caddy, and fully detailed with chrome and paint. There were other additions made to the engine compartment, but the one that stood out the most was the cut fan shroud that was brilliantly sectioned off to allow the detail of the engine to be seen through the plexi-glass. The hoses that could not be hard-lined were polished, chromed and also painted to match. The stock R-74 was also torn down and rebuilt byRubens Transmissions in San Gabriel, CA. Once the transmission was complete, Rick got it back and painted and detailed it to match the rest of the build.

Henry of Henry’s Customs gave the Coupe DeVille a full leather interior with modern seats that he had taken out of a newer 2007 Cadillac. The seats were then stitched in two different tones of leather, and accented with lizard skin inserts. Henry worked around the molded and painted dash to give the car a balance between a modern and a classic look. The trunk was also upholstered, and features a booming JBL Audio sound system that was installed around the 2 Aluminum Red’s pumps. The pumps were assembled by Luis Lemus of House of Pain in Baldwin Park, CA. Luis dressed the pumps with a whammy pump, 4 Adel dumps plumbed and hard-lined, and powered the entire setup with four 31-series batteries.

This four-year project moved along faster than the timeline suggests, and Rick was happy to finally get the car home. Once there, he set the Caddy up to be show ready, giving Bugs of Arizona the green light to add some extra stripping to the undercarriage and the trunk. Additional pinstripping was performed by Julz of Killer Koncepts, who finished up the remaining loose ends on the build, and thus, “Eyes Without a Face” was born.

Thanks to a little patience, Rick’s latest creation is finished and sitting pretty, making this ’84 Cadillac Coupe DeVille well worth the wait. You can currently catch Rick hitting the Boulevard in this one-of-a-kind ’80s beauty that meshes the perfect balance of class and style, and is sure to influence another generation of builders.

Eyes Without a Face

Engine: Stock 4.4 liter engine, candy painted to match and fully detailed with chrome and other tricks

Body/Paint: House of Kolor Candy Brandy wine, pinstripped and muraled with pearl and candy murals that can only be seen in certain lighting

Rides 1985 Cadillac Fleetwood Brougham – How You Like Me Now?

By the time most young men slide into the driver’s seat for the first time, they’ve already ave a dream car in mind, but for Rick Ruiz, his dream car literally pulled up in front of him