Newsletter
Sign Up today for our FREE Newsletter and get the latest articles and news delivered right to your inbox.
Home » 1971 Chevrolet Monte Carlo – Extra Change 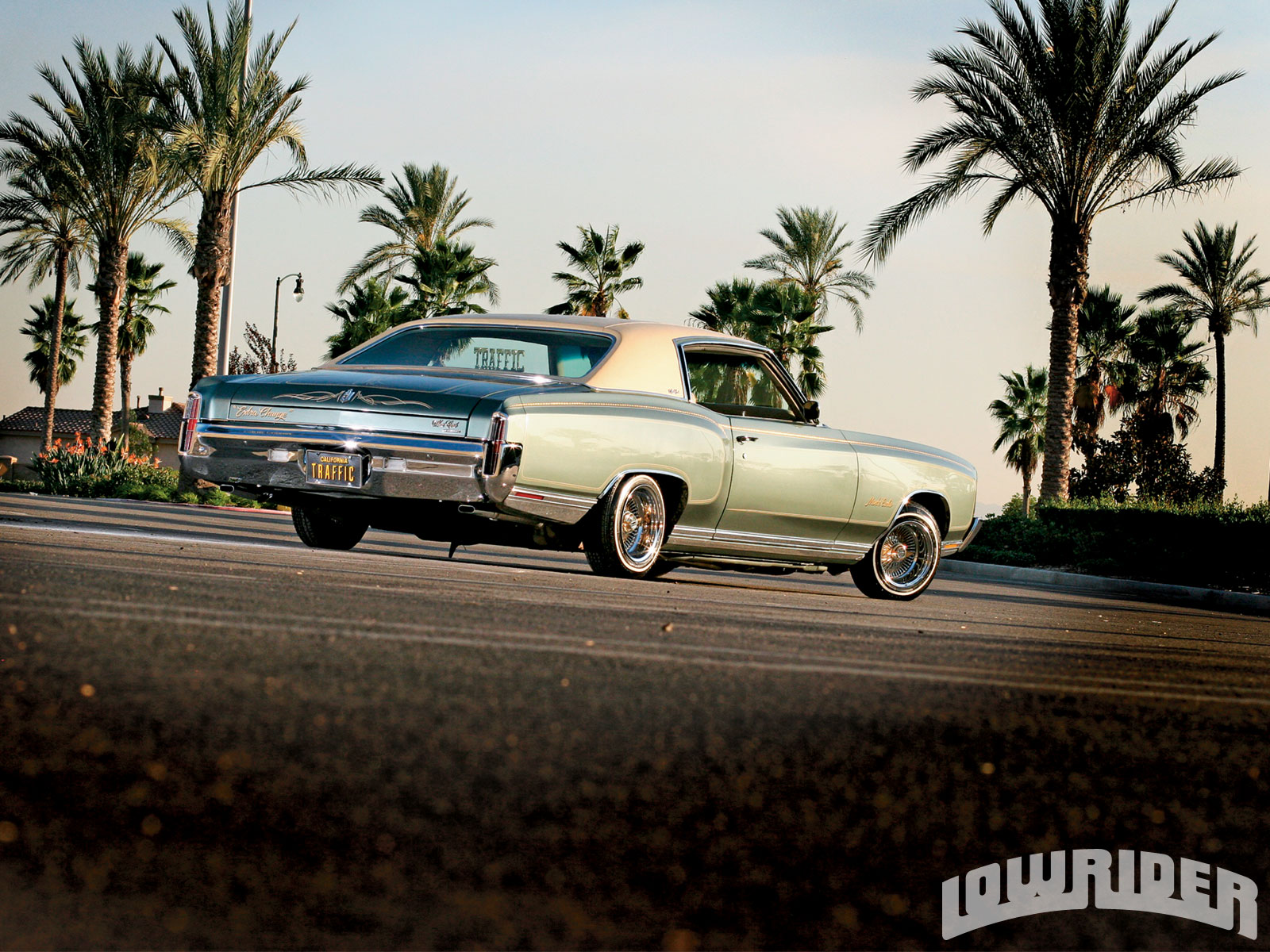 When young people learn to work hard and do the best they can in life, often times rewards for their hard work are soon to follow. In the case of 17-year old car enthusiast Mark Alcala Jr., that reward came in the form of his very own fully customized Lowrider car. By keeping his grades up and being an all around good kid, Mark was awarded a tricked-out, 1971 Monte Carlo, built especially for him by his generous father. Mark Alcala Sr. decided to use his experiences with his brother, Emilio Alcala, and his close friend Jeff Rogers, in their early days as the original members of the Traffic Car Club as the inspiration for what would become the best present a 17-year old Lowrider enthusiast could ever receive. The elder Alcala Sr. remembered what it was like in 1974, as he and his fellow car club members cruised Hollywood and Whittier Boulevards, and wanted to give his own son a taste of what that experience was like. Using Emilio’s 1970 Baby Blue Impala, and Jeff’s moss green ’71 Monte Carlo as his templates, he decided to make his son, Mark Jr. a custom car that featured the best aspects of these now classic rides.

The project started after Mark Jr.’s father finally found a Monte Carlo worthy of a rebuild. After a couple years of searching, Mark Sr. found the ’71 he was looking for last year, and purchased it for a cool $1,500. After the money was traded for the pink slip, Mark Sr. took the car home so that he and his brother, Steven Alcala, could begin working on the ultimate cruiser. After the two brothers finished the preliminary work on the Monte, the car was delivered to Dream Works, to let their expert staff straighten the body of the car, ultimately prepping it for paintwork. Mark Sr. chose to keep the Alcala Lowrider tradition alive by expertly painting the car the same deep moss green that once graced his friend’s Monte Carlo back in 1974. After the car was sprayed it was taken to Ruben Meda at Meda’s Upholstery, where he tore out the original interior and reupholstered it with tan leather and suede. A vinyl top was also added to match the paintjob, and the trunk was also dressed up to match the interior. Renowned hydraulic man, Richard over at Evergreens in Hesperia, CA, set the trunk up with a custom two-pump set up that includes hard lines and a floating pump with a battery rack. Mike Lamberson put the finishing touches on this long hood ride by pinstripping and gold leafing the car’s bodylines, engine and trunk lid.

After finalizing the work on the Monte Carlo, there was only one thing left to do; Mark Sr. needed to name the custom beauty. Realizing how fortunate he was to have such a great son to bestow this car upon, and taking into consideration the additional work he did to customize the car, Mark Sr. baptized the car with the name “Extra Change.” The car was then taken to Vegas, where it took home numerous awards. “Extra Change” has also been featured on the television show “Living The Low Life,” and has been recognized as a premier Lowrider many times over with cash and prizes. It’s safe to say that the Alcala tradition is alive and well, thanks to a proudly beaming Mark Jr. sitting behind the wheel of this truly amazing 1971 Monte Carlo. To further this tradition of family excellence, it should be noted that Mark Jr.’s mother, sister and brother are also about to finish building their own custom Lowriders and will soon be able to hit the show circuit in full Alcala force. Congratulations to this amazing Lowrider family, we’ll be sure to keep an eye open for what’s next to hit the streets from this talented family’s Alta Loma garage.