Newsletter
Sign Up today for our FREE Newsletter and get the latest articles and news delivered right to your inbox.
Home » Red-Hot Ragtop – 1959 Chevrolet Impala 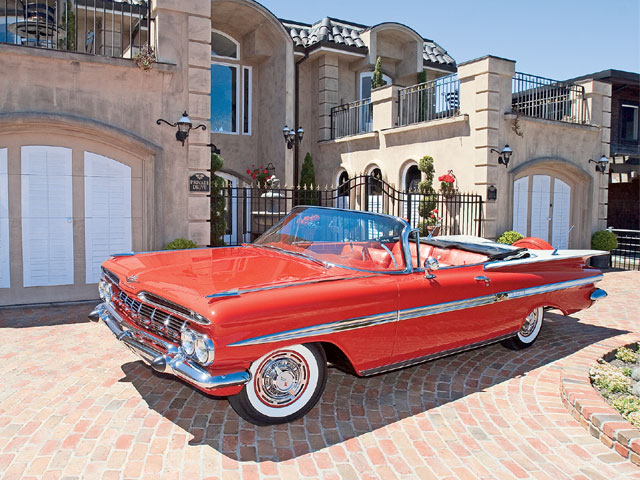 Not your typical Oldies Car Club bomb, Vincent Leon’s ’59 Chevy Impala is just vintage enough to fall into the Oldies fold. But then, this ’59 is so fine that any car club would welcome its inclusion into their ranks. Now a resident of Richmond, California, Vincent’s had several other convertible and hardtop Impalas since the mid-1980s when he began cruising with a couple of Los Angeles, California-based car clubs. But that was before he moved up to the Bay Area and began riding around in his red-hot ragtop with Oldies C.C.

Vincent apparently inherited his lowrider love from his “Pops,” who built his own Impalas and even a ‘57 Chevy Bel Air. The experience that Vincent gained from working on all of these previous projects was priceless and allowed him to really go all-out on this righteously restored red rag ride, which he acquired from a “good friend’ for $4,200. Now two years later, and $40,000 poorer, Vincent’s ’59 is a certifiable concours-quality show car.

An engineer during the day, the multitalented Vincent found the time to do a lion’s share of the work on the Impala, including putting down the paint job. Much of the rest of the customizing or restoring was performed by his “friends” at West Coast Chevy Classics in Richmond. The owner credits the crew, as well as Carlos, Charlie, “Icelo” and his family for their invaluable assistance in helping his project realize its ultimate potential.

The ’59 model is probably the most beautiful of all Impalas, and Vincent’s clean convertible is likely to change the minds of any remaining doubters out there. What’s next for Vincent and his Roman Red road warrior? “Drive it ’til the wheels fall off,” he says.