Newsletter
Sign Up today for our FREE Newsletter and get the latest articles and news delivered right to your inbox.
Home » Vintage Fire Truck-Inspired Pedal Car is a Father’s Perfect Gift 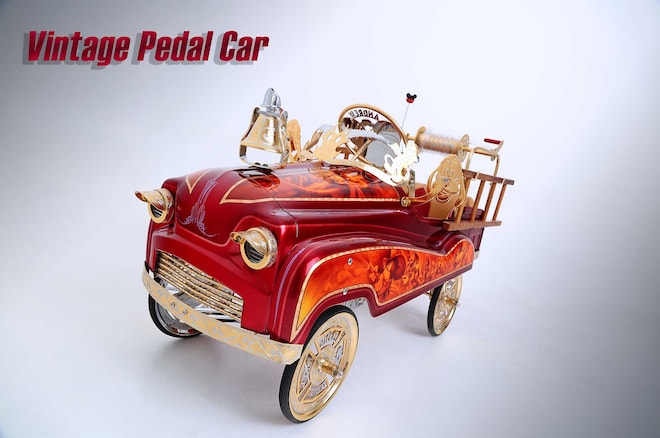 A lowrider-themed pedal car is the best way to introduce a newborn to the lowrider lifestyle, and for Steven Hernandez, it was not only a gift to his firstborn, but an adventure that would have him customizing this vintage fire truck pedal car. It was a way to celebrate, an excuse to add to the collection and a project he couldn’t wait to get his hands onto. “I wanted my son to have something that he could show next to my cars at shows” says Steven.

A large part of building this custom pedal car was venturing far away from the norm. Since he’s a part of the Emergency Response Team at work, Steven thought it would be fitting to customize a fire truck rather than a standard pedal car. His family are also fans of Disney, so he merged both passions into one single project and the final result is a fire truck that brings the heat.

The candy red paint, custom engraving and Disney murals throughout are complimented by a detailed, peanut butter leather and red seat upholstery combo that plays well with the gold accents used.

Steve not only has a project he can be proud of, but a ride that his son Andrew will be able to say was delivered with love, while doubling as his first entry ticket into the world of lowriding.

Wheels/Tires
Custom one off