Newsletter
Sign Up today for our FREE Newsletter and get the latest articles and news delivered right to your inbox.
Home » Angel Viramontes’ 1969 Schwinn Sting-Ray 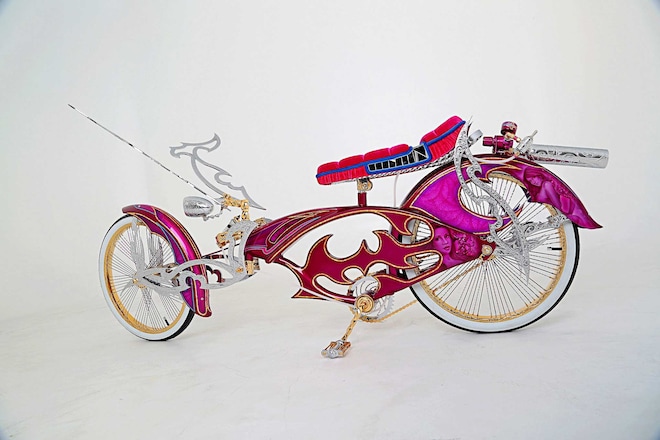 We first met 18-year-old Angel Viramontes the summer he graduated from high school. It was right around the same time that he had just completed a two-year build of his Sting-Ray bike—and this was no ordinary bike. In fact, the bike was a monumental feat that served as a starting point for his career, and while most teens are lost and wandering through life with no direction, Angel knew years before that he was going to be a custom painter, and this bike was his way of putting in the hours necessary to hone his skills.

This all began when Angel received a 1969 Schwinn Sting-Ray as a gift in July 2011. As with any true customizer, he immediately began switching up a few parts, cleaned it all up, and then began showing it. From there on in he continued to switch up the parts from time to time, but it wasn’t until March 2014 that he decided to tear it all down and completely rebuild it.

Angel began by stripping the paint and drawing up designs for new parts. Danny Pechal in Texas helped out with creating the CAD files that were eventually cut out by Mike Linville. From there, Garage Customs upholstered the seat, Miguel Chavez added some engraving, while the chrome was provided by Woody and CaliBoy.

When Angel finished the paint, he took it to Danny of DSG Graphics for the airbrushing and once back he finished it off by adding patterns and striping before the final reassembly.

But the unsung heroes of the build are Angel’s parents. They not only helped him financially but were also responsible for trailering it from shop to shop and show to show. In all, the build took two years to finish and he’s super excited to showcase it at the 2017 Las Vegas Super Show.

To be honest, I have a feeling that this isn’t the last time that we’ll be seeing a creation from this youngster, as he has feet firmly planted and headed in the right direction. He’s an artisan in the making and while we’re already impressed with his work we can’t wait to see what other bikes—and hopefully cars—he’ll be painting sometime soon.

Get familiar folks, because Angel is yet another great representation of the talent found in our scene and he’s also an integral part of the next generation of lowriders who will make all the difference in the world.

Suspension
C02 tanks with an air cylinder to the front forks