Newsletter
Sign Up today for our FREE Newsletter and get the latest articles and news delivered right to your inbox.
Home » Custom 1970 Schwinn/BMX – Like Father, Like Son 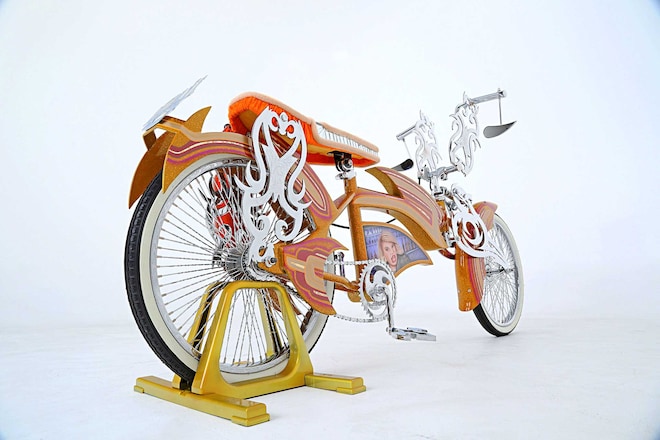 When your father lands the highly coveted cover of LOWRIDER magazine, it says a lot about your childhood—in fact, it probably defines it. This is the story of Andrew Tapia, a young man who grew up around lowriding, and a youngster who also happens to be the son of Jamie Tapia, a well-known Caprice lover and the owner of the Feb. ’17 cover car.

As luck would have it, his son, Andrew, was sitting around when he contemplated the idea of building his very own lowrider bike, so he approached his father with the idea and six years later the final product is what you see here. Knowing that he had had to live up to the Tapia’s last name and heritage in lowriding, Andrew came up with a unique concept. That concept? He decided to have his dad weld the back of a rusted BMX frame to the front of a Schwinn, and that resulted in them collectively creating a radical frame, which set the bar for the rest of the build.

Once cleaned up, Peter Tapia of AP Show Chrome then cut, chromed, and engraved every metal piece found on the bike. Once completed, his dad then used Spanish gold candy to paint the bike and overlaid it with magenta and purple for patterns. For added detail, Oscar Graphics put down some tan and orange pinstriping around the whole bike and then finalized the project by adding a mural of Joan Rivers. With the bike back and fully assembled the only thing lacking was his seat. To keep the seat up to par with the rest of the bike, he dropped it off at Dago’s Customs for a tan and orange velour that was applied using a tuck ‘n’ roll pattern.

As expected, the finalized lowrider bike has been a smash hit. It also becomes evident that his father played a major influence on this creativity and when asked about how it was to build the bike alongside his award-winning father, Andrew smiled and said, “My dad helped me every step of the way and I couldn’t have done it without him. The memories we’ve created building and cruising the bike has been great and I’ll never forget it.”