Newsletter
Sign Up today for our FREE Newsletter and get the latest articles and news delivered right to your inbox.
Home » The Battle Wagon – 2018 Bike & Model Car Super Show Spotlight 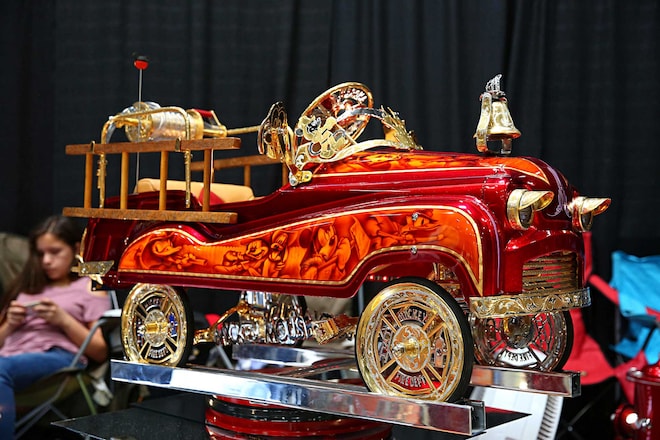 I’ll admit it, when I originally decided to check out the 2018 Lowrider Bike & Model Super Show I did it because as cool as Cadillac Fest was, it unfortunately wasn’t cool enough to combat the triple-digit temperatures. Walking around the Frank & Son Collectible Show exhibition center little did I know that I would come across a ride that was hotter than it was outside. That ride? A fire truck pedal car dubbed the “Battle Wagon.”

Unfortunately I was in a bit of a rush to walk the rest of the Lowrider Bike & Model Super Show so I was unable to track down the owner and ask him some questions about the Battle Wagon, but luckily part of the Battle Wagon’s display included an information card.

According to the card the Battle Wagon is owned by Andrew Hernandez and features paint by Danny D. with murals by Alberto Herrera. The fabrication work on Battle Wagon was done by Krazy Kutting and Cost of Fame, while the chrome and gold plating duties were handled by Steven Hernandez. To top it off, the Battle Wagon also features engraving by Daniel Castaneda and an interior by Chuys.

The Battle Wagon is one hot ride. I really hope that I’ll see it again one day and am able to meet its owner.