Newsletter
Sign Up today for our FREE Newsletter and get the latest articles and news delivered right to your inbox.
Home » “Baby Boogie,” a ’66 Schwinn Sting-Ray – Passing the Torch 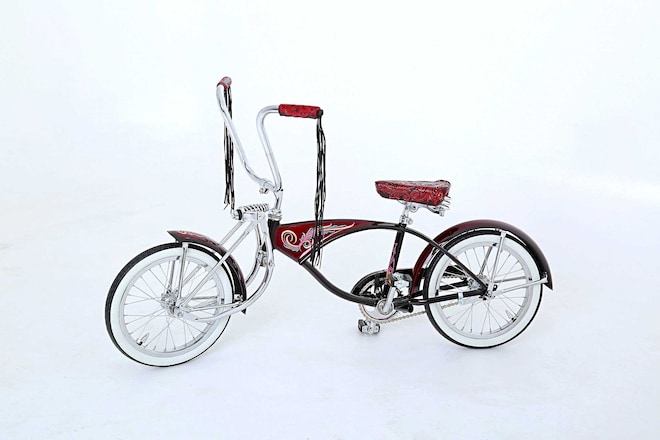 Grandparents will spoil their grandchildren to no end, so when both grandparents share an affinity for cruising and hitting switches, the spoils of their lifestyle are sure to trickle over. That’s exactly the case for Jayden. Since the day he was born, he was destined to be a third-generation lowrider and his grandparents were there to offer him an enjoyable experience that is sure to influence his love for lowriding.

“I built a trike called Gangsta Boogie for my firstborn son,” Big Vik explains. “So when my first grandson was born, I knew one day I would be building him a bike as well.” That day finally came when Jayden was caught trying to ride his father’s trike but was unable to because the trike was too tall for him. At that point, Big Vik decided to build him a miniature version of the same trike and call it “Baby Boogie.”

Soon after, he headed out to the Pomona Swap Meet and found a rusted 16-inch Sting-Ray frame, and after purchasing it brought it straight over to Big Poppa Kustoms where it got a fresh candy red and brandywine paintjob. Additional details were added by way of ‘striping by Edgar Oliva, chrome accents by Elis Chrome, and a custom leather tooled seat by Juan Gonzales.

In all, the final product sealed Jayden’s fate as a third-generation lowrider and there was no better form of payback than to watch Jayden take it for his first stroll. Seeing him ride the bike for the first time made Grandpa Vik very proud and he’s hopeful that the enthusiasm and joy he witnessed will evolve into a love for the lowriding that will span generations to come.