Newsletter
Sign Up today for our FREE Newsletter and get the latest articles and news delivered right to your inbox.
Home » ’68 Schwinn Bike & ’50s Taylor Tot Stroller – A Solid Foundation 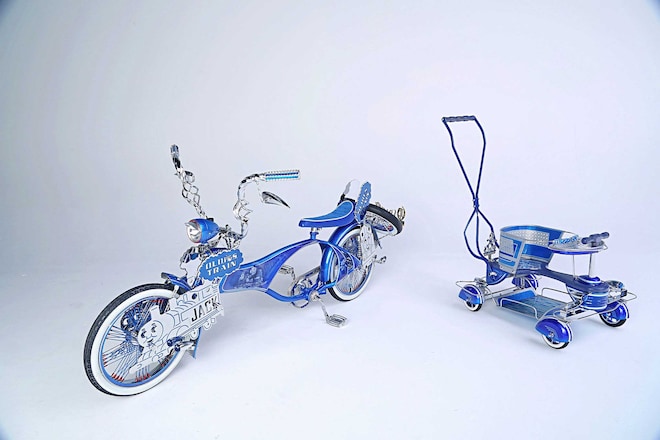 Whether it be a home, a lowrider, or a young adult, laying a solid foundation is a fundamental part of the process. Without it everything is prone to collapse, and George Mirzoian knows this all too well. As a kid, his lowriding adventures began by building and competing lowrider bikes. Soon thereafter he moved onto cars and this taught him not only work ethic but discipline and focus.

Today George is not only one of the top members of Oldies Car Club but a father who now wants to instill those same beliefs into his children. To do so he is forging their way into lowrider culture and along with the help of his brother and friends they’ve collectively built these two creations for his kids who have now begun showing them at car shows. It’s a family affair that feeds his children’s desire to go to car shows and he sums it up best when he says, “The boys like going to car shows with me and they too love competing.” He further adds, “Soon enough, we’ll be building bigger projects together and then they’ll graduate to cars.”

Interior
Blue and gray in suede and leather