Newsletter
Sign Up today for our FREE Newsletter and get the latest articles and news delivered right to your inbox.
Home » ’62 Impala Pedal Car & ’50 Taylor Tot – Rolling Up in Style 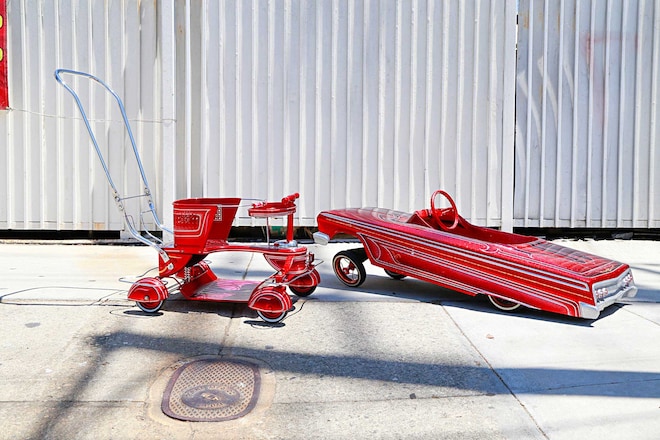 For Juan Venegas, the lowrider culture is a family affair. After falling in love with the car scene as a young boy, Juan knew he would pass down his hobby to his own children. He has two kids, 6-year-old Ayden and 4-year-old Ava, with his lovely and supportive wife Yesenia. The family of four lives in the beautiful Orange County beachside city of San Clemente, California.

A couple years ago, Juan purchased a miniature pedal car made in the image of a 1962 Chevy Impala for his son, followed by a 1950 stroller for his daughter. Juan wanted his entire family to roll up to a car show in style. After fabricating the parts for projects himself, he sent them off to get painted at his favorite custom shop, Pelon’s Painting. The pedal car and stroller were painted in eye-catching candy paint, featuring a bright apple red lined with silver pinstripes.

The finished projects earned him the smiles of his kids once they had a chance to ride around the block. Juan ensured the pedal car and stroller matched his own 1987 Monte Carlo, aka “Bloody Money,” which was featured in Lowrider magazine in 2018. He recently took his family to a couple car shows where he was awarded for his kids’ new rides.

Although his children are beginning to grow out of the pedal car and stroller, he plans to keep the projects in his family to pass down to future generations. Juan’s immense love for the lowrider culture encourages him to connect with people from all walks of life. He enjoys the attention he receives when cruising through the streets of O.C. with his family. For Juan, “there’s nothing like a lowrider.”

Body/Paint
House of Kolor candies with metal flake and pinstriping