Newsletter
Sign Up today for our FREE Newsletter and get the latest articles and news delivered right to your inbox.
Home » 2018 Evil Wreckoning – When Two Worlds Collide 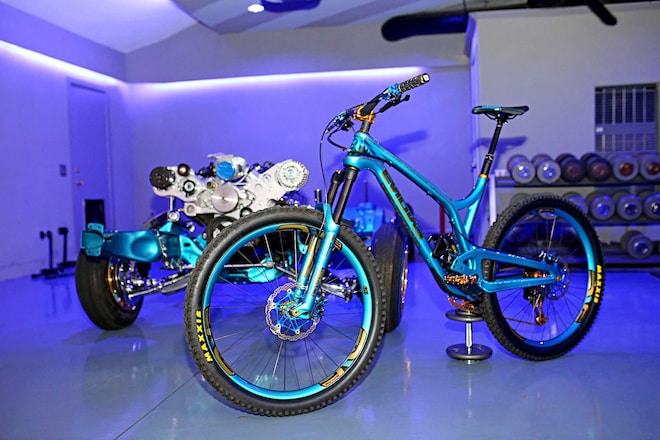 Modified beach cruisers and Schwinn bikes are the first things that come to mind when someone mentions “lowrider bikes,” but this feature is different. Very different. What you see here is no average cruiser. It’s a 2018 Evil Wreckoning mountain bike that’s built to land tall jumps and hurdle some of the toughest off-road terrain. What you’re seeing is the end result of someone who merged his love for lowriding with his passion for mountain biking and in turn created a lowrider-inspired mountain bike that is top-notch.

The visionary behind this bike is Seena Shah. An avid car lover, mountain biker, and lowrider enthusiast, Seena set out to build a mountain bike that would represent his lifestyle, and it all started by accident—literally. While driving back from Whistler (British Columbia) his other bike fell off the bike rack, and by the time he was able to turn back, all evidence of it was gone, which shouldn’t have come as a surprise as Seena had just under $11,000 invested into the bike.

Knowing he would never see his bike again, he went out the very next day and purchased a 2018 Evil Wreckoning frame, which sparked the creation of this build here. “I live in two different worlds, the lowriding world and the mounting biking one, and they both collide in this bike,” Seena says. As it sits, the carbon-fiber frame of the bike is doused in the factory Megalodon Blue and accented with flaked patterns, pinstriping, and airbrushing. The gold leaf was done by Phillip’s Finelines while Alberto Herrera airbrushed imagery that includes notorious Deathrow Records founder Suge Knight. But this is no garage queen. Seena puts this bike to work on some of the most technical and brutal mountain biking venues throughout North America, which is why it’s equipped with top-shelf components like Hope V4 brakes, 200mm Hope brake rotors, SRAM Eagle drivetrain with 12 gears, and DVO diamond fork 29-inch carbon-fiber wheels.

“For the most part, the bike is made up of carbon fiber and that in itself helps absorb a lot of the shock from riding,” Seena says, referencing the bike’s ability to handle rough terrain.