Newsletter
Sign Up today for our FREE Newsletter and get the latest articles and news delivered right to your inbox.
Home » 1996 16-inch Lowrider Bike – The Godfather 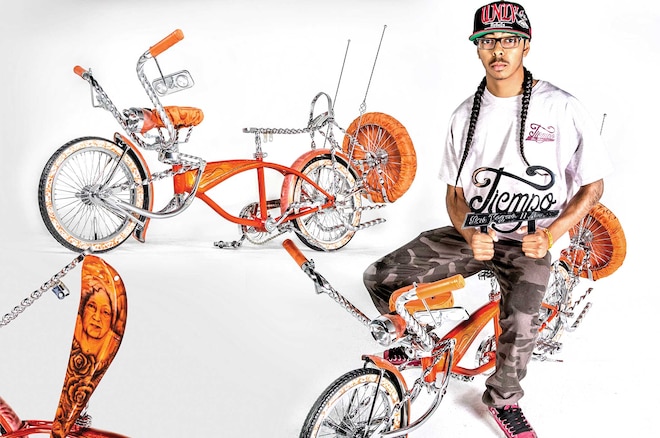 It’s up to all of us to keep this lowriding lifestyle going. For most, our culture and traditions continue to be passed down from generation to generation. This is exactly what Martin Parra of Pachucos Car Club did when he decided to give his godson a brand-new lowrider bike. Little did Gabriel Ureno know the influence his godfather’s gesture would have on him.

With lessons learned from his grandmother, such as making sacrifices and how to save his money, and with help from his family, Gabriel was off to complete his full custom bike, “Mi Esperanza.” Gabriel and longtime friend, Joey Escobar, completed the metalwork and sprayed the bike’s signature Sunburst Orange House of Kolor candy paintjob.

Then it was off to Felix Dezigns where Zack Felix and Luis “Swigs” Gutierrez would come together to lay down a dazzling combination of tape shades, gold leafing, and pinstriping accents with Cosme Lojero creating the custom airbrushed mural found on the seat. Wicho of Las Vegas, Nevada, would sew and stich an array of old-school diamond tuck patterns into various shades of oranges serving as a steering wheel, seat, and custom continental kit cover.

With another custom lowrider bike already in the works, Gabriel thanks his godfather, whose gesture would transform his childhood and eventually lead him to join Tiempo Bike Club of Las Vegas…down a path filled with car shows, awards, and lowriding recognition.