Newsletter
Sign Up today for our FREE Newsletter and get the latest articles and news delivered right to your inbox.
Home » 1970 Huffy Beach Cruiser – The Journey is the Reward 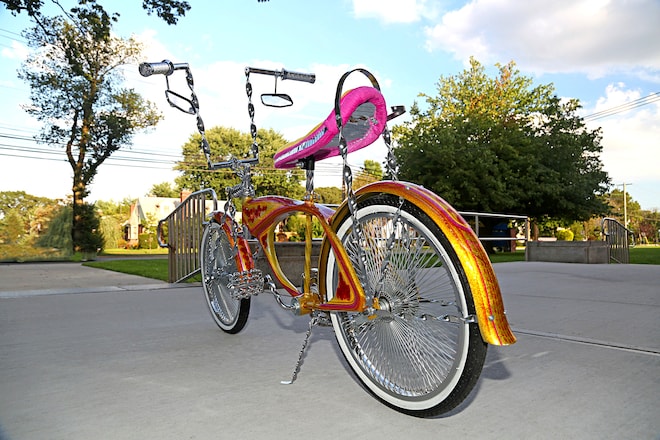 New York has a different pace compared to Los Angeles, but if there’s one common bond we share it’s the appreciation and love of lowriding. Though still a growing segment in New York, we’ve seen some really clean examples arise from the East Coast, and this one here, owned by Justina, is a prime example.

Justina’s dad, Ken, picked the bike, which was originally purchased at a yard sale almost two decades ago. His original intentions were to build it for himself, but as the years passed, it took refuge in the corner of the garage as Ken became far too focused on finishing the 1962 Impala he had long been wrenching on.

Fast-forward some time later and Ken’s daughter is no longer living at home. During her visits, the pair would make the most to enjoy each other’s company but ultimately they decided to build their relationship by dusting off the old bike and creating a masterpiece they could collectively work on together.

“This was something we could build together,” Ken explains. “It was also a way to show [my daughter] that she can accomplish anything she wants in life.” To begin, they first had to come up with a budget, so Justina agreed to set aside part of her allowance to fund the build. As she continued to save, her father told her that she would have full creative freedom to build the bike of her liking.

During the early stages of their build, the duo began by cutting out cardboard templates to mock up the frame mods. They would cut, add it to the bike, and then make the necessary adjustments until it was to their liking. From there, the bike along with the templates were sent to California to have Albert De Alba Jr. sand blast the frame. From there he did the metalwork based off the cardboard templates, prepped the frame, and followed it up with some primer before shipping it back.

Once the bike made its way back, it was taken directly to Marvin Shivnarain who dipped the bike frame and fenders in resin, followed by some candy paint and patterns using colors chosen by Justina. Upon its completion, Shivnarain finished the paintwork by adding some leafing and striping. The bike then went to Junior Capo to have it wet sanded while they reached out to Margarito Patino in Texas to have the seat upholstered with that old-school tufted and mirror style reminiscent of early lowriding.

An incredibly clean bike, to say the least, the luster of the color selection and the legendary hands that worked on this bike make it a showstopping piece that represents not only a movement but a family bond. It’s a bike that serves as a solid representation of lowriding, a family heirloom that is packed with memories that will never be forgotten, and a bond that will forever be unbreakable.