Newsletter
Sign Up today for our FREE Newsletter and get the latest articles and news delivered right to your inbox.
Home » 1969 Schwinn Sting-Ray – La Huichola 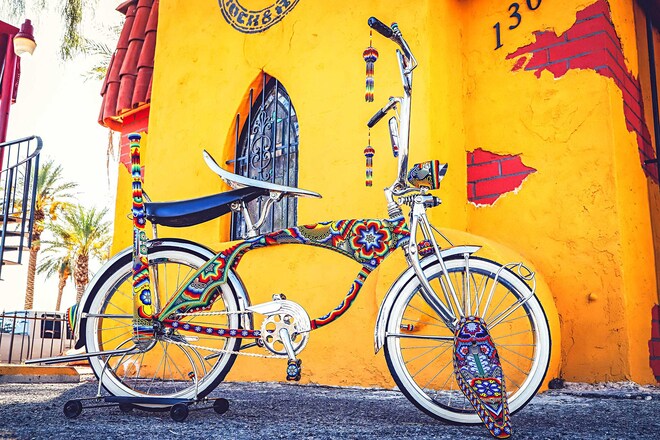 The lowrider culture is one that has traversed the entire world. Nowadays lowriders can be found on every continent, each contributing a little something along the way. But more importantly, everyone adds a little something to make it their own. When Vincent, of Guadalajara, Jalisco, Mexico, sat down to contemplate what he could do to be different with his latest project, a 1969 Schwinn Sting-Ray, he knew he had to really think outside the box.

What he came up is something that has never been done before. “La Huichola” is the first lowrider bicycle of its kind. While everyone is laying down candy paintjobs, Vincent opted to incorporate a traditional and popular Wixaritari art form known as Huichol Art. This diverse culture found in Jalisco, Mexico, boasts handcrafted vibrant patterns and designs by embedding minuscule glass basins called “chaquiras.” Each “kuka,” as they are known in the Wixaritari language, is painstakingly adhered together to produce elaborate colorful schemes full of life with designs representative of their culture. The process is one that took over six months to complete but in the end the results yielded a unique union between cultures that had never been seen before. However, Vincent didn’t end there. He tracked down original Schwinn parts, such as a banana seat, bat holder, speedometer, and taillights. He also had Cesar Mejia add airbrushed artwork depicting native Wixaritari women.

While Vincent did not intend to, he would ultimately go on to create a cultural piece unlike any other. The project contributes to the diffusion of the culture in his home state, promoting the art, craft, and handcrafted riches produced in his country of Mexico.