Newsletter
Sign Up today for our FREE Newsletter and get the latest articles and news delivered right to your inbox.
Home » 1969 Schwinn Sting-Ray – A Creative Clash 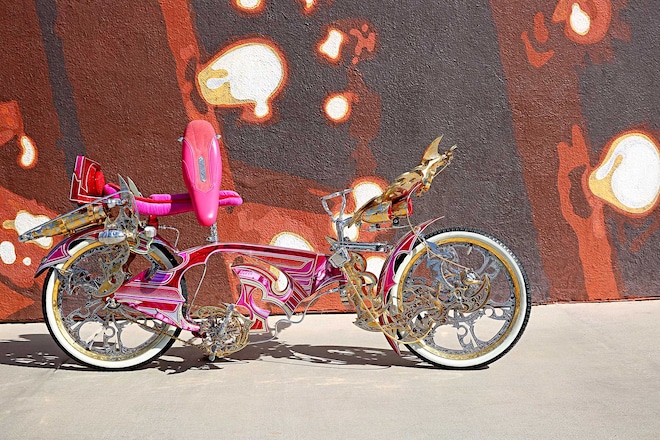 Building lowrider bikes is what Rene Valdez knows best. What started off as a hobby has now become a lifestyle that he’s fully immersed in. For the past decade Rene has been honing his craft and elevating the playing field, but this time around he wanted to push the boundaries of a lowrider bike and create a stunning showpiece in collaboration with his brother.

To begin, they started with a 1969 Sting-Ray frame. The frame was taken down to bare metal and once that was accomplished the brothers sat back and discussed ideas and concepts. In reality, this meeting of the minds was no simple task. Each had their own opinion and vision, and this is where a creative class began. While no easy task, the two wound up ironing out their differences and eventually all things worked out.

With the frame complete, it was prepped for paint and doused with a silver flake, followed up with hues of paint from House of Kolor. With pink, purple, and red patterns elegantly gracing the frame, one can also find a host of ‘striping that is done in lavender and pink. Accenting the frame is a barrage of two-tone chrome and gold plating and upon close inspection you’ll find a slew of engraving that finalizes the bike.

The bike took six years to complete but the ultimate test wasn’t what they thought, but more so how it would hold up in competition, so they debuted the bike at the Las Vegas Super Show where it took Third Place for Bike of the Year. In all, the brothers are happy with the outcome, but their realistic outlook on the build also has them understanding that there was still more to do and a lot left on the table that could’ve been done.

In light of that, we know that the boys’ll be back at the drawing table sometime soon so we’re in high anticipation about their next build, because there’s no stopping them.