Newsletter
Sign Up today for our FREE Newsletter and get the latest articles and news delivered right to your inbox.
Home » 1966 Schwinn Stingray – The Promise 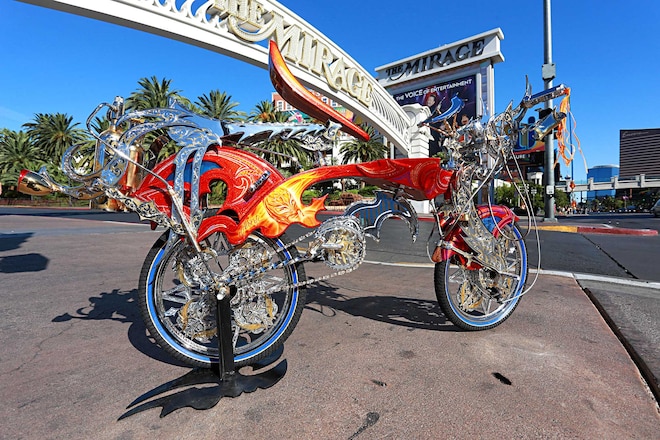 Do you remember your first car show? Do you remember which car left a lasting impression on you? Was it the blinding luster of the chrome, the glisten of the candy flakes, or the details of a perfectly polished 100-spoke Dayton? Regardless of what got you hooked, everyone has his or her first-time memory. For Jose Zamorano Jr. his first experience was a mind-boggling one that left him mesmerized by all aspects of lowriding. The impact it left on him was so unadulterated he made a promise to his father that one day they would build one together and that it would pay homage to his favorite wrestler, Rey Mysterio.

Prior to the project even starting, the father and son team talked about their plans to build a bike that would set a benchmark. They knew from the get go that the build would have to be extreme. They didn’t want to strut, they wanted to stunt, and they had their sights set on building something that would be a serious contender for winning the highly coveted Lowrider Bike of the Year Award.

To begin, the Krazy Kutting crew began what would be hundreds of hours to complete the intricate engraving of chrome and gold metalwork. They would also take on the task of creating a one-off set of 20-inch wheels wrapped with radial tires sporting blue whitewalls and gold leafing. For paint, a gold base was sprayed that paved the way for the custom orange candy color combinations. The intricate murals came by way of the talented Albert Herrera. These murals depicted images of Rey Mysterio and once complete Bugz Auto Art tied in all the details by implementing his signature fine-line accents and gold leafing. The lengthy list of modifications eventually included a molded tank, center frame, and custom air tanks that power two air cylinders.

Fast-forward to present day and the pair sees car shows from a different perspective. They’ve gone from spectators to players; whereas they used to attend shows to see the attractions, they’ve become an attraction and an influence on other father/son teams who are looking to do the same.