Newsletter
Sign Up today for our FREE Newsletter and get the latest articles and news delivered right to your inbox.
Home » 1948 Murray Steelcraft Pedal Plane – Blue Agave Flyer 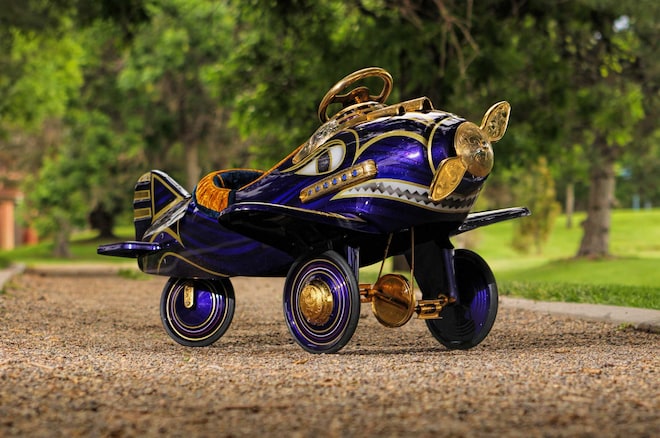 Those of us in lowriding get the bug for lowriders at different stages of our lives some at a young age, some when we are older. For Sean Martin he was born into it. His dad Ryan had been a longtime lowrider and has had many cars over the years. Sean received his first ride at the young age of 2 when his Grandma Armijo (Nana) RIP bought him a 1948 Murray pursuit plane pedal car. A few years after his 2nd birthday his dad’s car came out in Lowrider magazine, Ryan wanted his kids to be more involved with the shows. So he made a plan with his son to get his first ride ready for the show circuit. With the help of his older brother James the two started taking the plane apart. Wanting to follow in his dads’ footsteps and be able to set up their rides together at the show, they decided to make a matching pair. With the ride torn apart Ryan contacted the man who painted his car Rob Vanderslice to make sure the graphics and the colors were a sure match. Rob laid down a gold base and then laid down some patterns before applying a cobalt blue candy. With Rob busy working his magic, Ryan and the boys sent the chrome parts to Krazy Kutting in Arizona for some engraving and gold plating to make sure the car was a sure match to his pops ride. They also made a custom gauge cluster. To keep the theme the same Bill and Chito over at Gotcha Covered stitched up the same Blue and Gold suede as his dads for the seat and inner panels. Since completing the Pedal Plane Sean and his dad have showed at many shows bringing them closer together. Sean even named his car after his Dads The Blue Agave Flyer.

Body/Paint
HOK Candy Cobalt Blue with patterns over a gold base.